5 Takeaways From the First Jan. 6 Hearing 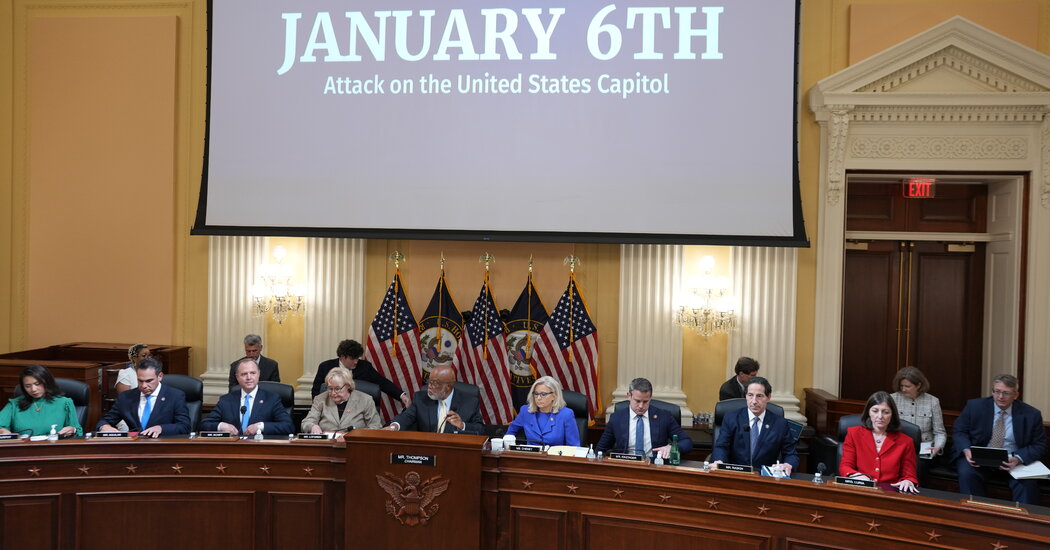 The opening House hearing into the events surrounding the Jan. 6, 2021, attack on the Capitol was a compact and controlled two hours, designed as an overview of what was described as a methodical conspiracy, led and coordinated by President Donald J. Trump, to thwart the peaceful transfer of power and democracy itself.

It was also an enticement to the American people to watch the next five scheduled hearings.

Here are some takeaways:

Trump was at the center of the plot.

The committee’s chairman, Representative Bennie Thompson, Democrat of Mississippi, and vice chairwoman, Representative Liz Cheney, Republican of Wyoming, began laying out what they described as an elaborate, intentional scheme by Mr. Trump to remain in power, one unprecedented in American history and with dangerous implications for democracy.

“Jan. 6 was the culmination of an attempted coup,” Mr. Thompson said.

Both leaders had blistering words for Mr. Trump and about the threat he poses to American democracy. They made it clear that, for all his ongoing bluster about stolen elections, Mr. Trump had knowingly spread claims about election fraud that people closest to him knew were false, tried to use the apparatus of government and the courts to cling to power, and then when all of that failed, sat back approvingly in the White House as a mob of his supporters stormed the Capitol threatening to hang his vice president.

Key figures around Trump never believed his lie of a stolen election.

The hearing used the videotaped testimony of some of Mr. Trump’s closest aides and allies to show that the Trump campaign and his White House — and perhaps the president himself — had known well that Joseph R. Biden Jr. won the 2020 election. It showed how Mr. Trump and his loyalists had used a calculated campaign of lies to bind his followers and build support for his attempt to stay in power, through extralegal means and violence.

The committee played excerpts from videotaped interviews of former Attorney General William P. Barr, who said he had told Mr. Trump that the talk of widespread fraud in the 2020 election was “bullshit.” There was a clip of his daughter Ivanka Trump saying that she accepted Mr. Barr’s conclusions and of a campaign lawyer, Alex Cannon, who told Mark Meadows, the White House chief of staff, that Trump allies had found no election issues that could reverse the results in key states. “So there’s no there there?” Mr. Meadows responded, according to Mr. Cannon’s account.

At one point, in one of the most potentially damaging moments of the videotaped interviews, Mr. Trump’s son-in-law Jared Kushner is shown dismissing the threats of Pat A. Cipollone, then the White House counsel, to resign in the face of Mr. Trump’s machinations as “whining.”

A Capitol Police officer who battled the rioters humanized the drama.

Caroline Edwards, a Capitol Police officer who is believed to have been the first injured during the riot, testified in chilling detail about the first breach of police lines, in which she was crushed beneath bike racks that were pushed on her and a handful of other officers who had no chance to hold back the mob.

“The back of my head clipped the concrete stairs behind me,” she testified, recounting the moment before she lost consciousness. Her testimony of continuing to fight off the rioters in efforts to protect the Capitol provided a striking contrast with the committee’s account of Mr. Trump sitting in the White House watching with apparent sympathy as the mob ransacked the building, yelling at aides who implored him to call off the violence and saying at one point, “Maybe our supporters have the right idea.”

Once she came to and beheld the scene from behind police lines, Officer Edwards said, her breath was taken away. She slipped in blood, saw fellow officers writhing in pain and suffering from bear spray and tear gas, and gazed out on what she described as a war scene unfolding outside the Capitol.

“It was carnage,” she said. “It was chaos. I can’t even describe what I saw.”

One of the witnesses, a British documentary filmmaker named Nick Quested who was embedded with the extremist Proud Boys, gave testimony that indicated that group’s leadership had conspired with another extremist organization, the Oath Keepers, well ahead of the riot to plan an attack that would breach the Capitol.

Mr. Quested showed footage he had shot of the Proud Boys leader, Enrique Tarrio, meeting clandestinely with Stewart Rhodes of the Oath Keepers on Jan. 5, and he told of the group breaking away from a morning rally behind the White House on Jan. 6 to scout police defenses around the Capitol.

“I am not allowed to say what is going to happen today because everyone’s just going to have to watch,” one woman said on video on the morning of Jan. 6, when no hint of an attack was evident.

There is more to come on Trump’s role

The hearing concluded with a hint of what was to come in the next hearings, which committee members hope will show how Mr. Trump was personally responsible for the worst attack on the Capitol since the British ransacked it in 1814 and that he remains a threat to the American democratic experiment.

The committee concluded with videos of the rioters themselves saying they believed they were invited to Washington that day by their president, who had asked them to fight for him.

“He lit the fuse that ultimately resulted in the violence of Jan. 6,” Mr. Thompson, the committee’s chairman, said of Mr. Trump.