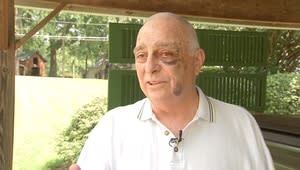 Police are searching for a teenager who punched a senior citizen in the face and filmed the assault on his phone.

Al Westmoreland’s bruises are still serious nearly a week after he was brutally attacked by a teen riding on a bike near Jefferson High School. He said the teen held a camera the whole time.

Why some think this may be connected to a violent social media challenge, on Channel 2 Action News at 5 p.m.

Westmoreland told Channel 2′s Tom Regan that the teen circled around his pickup and stopped in front of his truck. He stepped out to ask what was going on.

“He came right up to me, held the camera in my face. I just took my hand, pushed away the camera and when I did, he hit me,” the 74-year-old said. “I hit the truck, the street. Don’t remember any of that.”

Paramedics rushed him to the hospital after the assault. He suffered a concussion, fracture and facial fractures.

“I understand the concern from our citizens about this incident and I can assure everyone that the Jefferson Police Department will follow through with this investigation,” Jefferson police said.

Colorado deputy shot and killed in line of duty; police search for suspect

Colorado deputy shot and killed in line of duty; police search for suspect