A Broken Redistricting Process Winds Down, With No Repairs in Sight 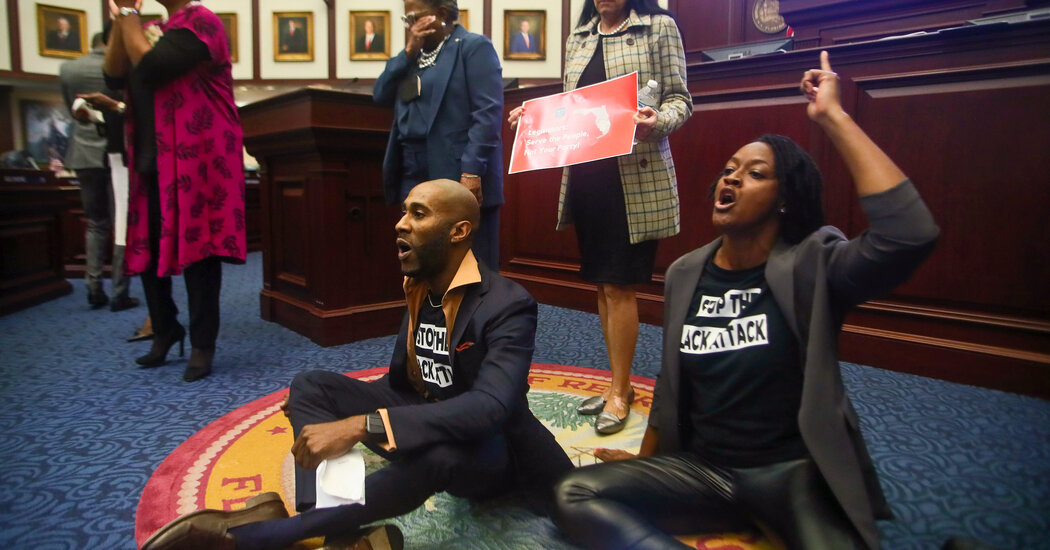 WASHINGTON — The brutal once-a-decade process of drawing new boundaries for the nation’s 435 congressional districts is limping toward a close with the nation’s two political parties roughly at parity. But the lessons drawn from how they got there offer little cheer for those worried about the direction of the weary American experiment.

The two parties each claimed redistricting went its way. But some frustrated Democrats in states like Texas, Florida and Ohio sounded unconvinced as Republicans, who have controlled the House in 10 of the last 15 elections despite losing the popular vote in seven of them, seemed to fare better than Democrats at tilting political maps decisively in their direction in key states they controlled.

At the least, political analysts said, Republicans proved more relentless at shielding such maps from court challenges, through artful legal maneuvers and blunt-force political moves that in some cases challenged the authority of the judicial system.

And, to many involved in efforts to replace gerrymanders with competitive districts, the vanishing number of truly contested House races indicated that whoever won, the voters lost. A redistricting cycle that began with efforts to demand fair maps instead saw the two parties in an arms race for a competitive advantage.

“Once the fuel has been added to the fire, it’s very hard to back away from it,” said Kathay Feng, the national redistricting director for the advocacy group Common Cause. “Now it’s not just the operatives in the back room, which is where it started. It’s not just technology. It’s not just legislators being shameless about drawing lines. It’s governors and state officials and sometimes even courts leaning in to affirm these egregious gerrymanders.”

Democrats pulled nearly even — in terms of the partisan lean of districts, if not the party’s prospects for success in the November midterms — largely by undoing some Republican gerrymanders through court battles and ballot initiatives, and by drawing their own partisan maps. But the strategy at times succeeded too well, as courts struck down Democratic maps in some states, and ballot measures kept party leaders from drawing new ones in others.

New York is a particularly glaring example. In April, the seven Democratic justices on New York’s highest court blew up an aggressive gerrymander of the state’s 26 congressional districts that had been expected to net Democrats three new House seats. The court’s replacement map, drawn by an independent expert, pits Democratic incumbents against each other and creates new swing districts that could cost Democrats seats.

Weeks later in Florida, where voters approved a ban on partisan maps in 2010, the State Supreme Court, comprising seven Republican justices, declined to stop the implementation of a gerrymander of the state’s 28 congressional districts. The ruling preserves the new map ordered by Gov. Ron DeSantis, a Republican, that could net his party four new House seats. The ruling cited procedural issues in allowing the map to take effect, but many experts said there was never much doubt about the result.

In New York, Democrats ignored a voter-approved constitutional mandate that districts “not be drawn to discourage competition” or favor political parties. And in Republicans’ view, Democrats sabotaged a bipartisan commission that voters set up to draw fair maps.

“The Democrats seriously overreached,” said John J. Faso, a Republican and former New York state assemblyman and U.S. representative. The bipartisan commission, he added, “is what people voted for.”

What to Know About Redistricting

But in Ohio, Republicans who gerrymandered congressional and state legislative districts this spring also ignored a voter-approved constitutional ban on partisan maps. They not only successfully defied repeated orders by the State Supreme Court to obey it, but suggested that the court’s chief justice, a Republican, be impeached for rejecting the maps drawn by the state’s Republican-dominated redistricting commission.

Of the approximately 35 states where politicians ultimately control congressional redistricting — the remainder either rely on independent commissions or have only one House seat — the first maps of House seats approved in some 14 states fit many statistical measures of gerrymandering used by political scientists.

One of the most extreme congressional gerrymanders added as many as three new Democratic House seats in staunchly blue Illinois. Texas Republicans drew a new map that turned one new House seat and eight formerly competitive ones into G.O.P. bastions.

Most gerrymanders were drawn by Republicans, in part because Republicans control more state governments than Democrats do. But Democrats also began this redistricting cycle with a built-in handicap: The 2020 census markedly undercounted Democratic-leaning constituencies, like Blacks and Hispanics.

Because those missed residents were concentrated in predominantly blue cities, any additional new urban districts probably would have elected Democrats to both congressional and state legislative seats, said Kimball W. Brace, a demographer who has helped Democratic leaders draw political maps for decades.

Undoing those gerrymanders has proved a hit-or-miss proposition.

Lawsuits in state courts dismantled Republican partisan maps in North Carolina and Democratic ones in New York and Maryland. But elsewhere, Republicans seized on the Supreme Court’s embrace of a once-obscure legal doctrine to keep even blatant gerrymanders from being blocked. The doctrine, named the Purcell principle after a 2006 federal lawsuit, says courts should not change election laws or rules too close to an election — how close is unclear — for fear of confusing voters.

Alabama’s congressional map, drawn by Republicans, will be used in the November election, even though a panel of federal judges ruled it a racial gerrymander. The reason, the Supreme Court said in February, is that the decision came too close to primary elections.

The delay game played out most glaringly during the extended process in Ohio, where ballot initiatives approved by voters in 2015 established a bipartisan redistricting commission that Republicans have dominated.

Federal judges ordered the gerrymandered G.O.P. maps of Ohio House and Senate districts to be used for this year’s elections, even though the state’s high court had rejected them.

When a State Supreme Court deadline for the commission to submit maps of legislative districts for legal review came due last week, Republicans simply ignored it.

What is redistricting? It’s the redrawing of the boundaries of congressional and state legislative districts. It happens every 10 years, after the census, to reflect changes in population.

How does it work? The census dictates how many seats in Congress each state will get. Mapmakers then work to ensure that a state’s districts all have roughly the same number of residents, to ensure equal representation in the House.

Who draws the new maps? Each state has its own process. Eleven states leave the mapmaking to an outside panel. But most — 39 states — have state lawmakers draw the new maps for Congress.

If state legislators can draw their own districts, won’t they be biased? Yes. Partisan mapmakers often move district lines — subtly or egregiously — to cluster voters in a way that advances a political goal. This is called gerrymandering.

Is gerrymandering legal? Yes and no. In 2019, the Supreme Court ruled that the federal courts have no role to play in blocking partisan gerrymanders. However, the court left intact parts of the Voting Rights Act that prohibit racial or ethnic gerrymandering.

“The politicians put in charge of it spent nine months trampling the Ohio constitution, trashing the rule of law and wasting taxpayer dollars,” Paul De Marco, a Cincinnati lawyer and gerrymandering critic, said. “To have put them in charge was like letting children set their own bedtime.”

Each party has won a handful of state court battles to preserve partisan maps. More common, though, is that obvious gerrymanders go unchallenged. Blatantly unfair Republican maps in states like Texas, Tennessee and Wisconsin have sailed into law without being challenged in state courts because critics assume that state courts are aligned with the gerrymanders’ drafters.

Texas Republicans told a federal judge this spring that a State Senate district in Fort Worth could not have been illegally drawn to weaken Black and Hispanic voters because their true goal was to weaken Democrats — a partisan aim beyond federal courts’ reach. No challenge was filed in state court, where all nine justices on the State Supreme Court are Republicans.

The Wisconsin State Legislature has been under Republican control since 2011, in part reflecting one of the nation’s most extreme gerrymanders.

When Gov. Tony Evers, a Democrat, and the Legislature deadlocked this spring over an equally partisan state legislative map, the Republican-controlled Wisconsin Supreme Court ordered new maps drawn. But it said the guiding principle should be to protect incumbents — effectively guaranteeing continued Republican control.

More upheaval could lie ahead. The U.S. Supreme Court could rule next year in two pivotal cases arising from this year’s gerrymander battles.

In the first, the justices will review a ruling issued this spring by a three-judge panel that Alabama Republicans violated the Voting Rights Act by drawing only one of the state’s six House districts where Blacks might elect their favored candidate, instead of two. According to the 2020 census, a third of Alabama residents are African American.

Many experts expect the justices to further weaken or even strike down a portion of the law dealing with racial disparities in redistricting.

The other case could be even more momentous. On June 16, the court will decide whether to hear a claim by North Carolina Republicans that their state Supreme Court had no authority to strike down its gerrymandered maps on grounds that drawing political boundaries is a legislative duty beyond court review.

Should they prevail, gerrymanders might be exempt from courts’ control, and this year’s rulings vetoing unfair maps in North Carolina, Maryland and New York could be moot. So might the truly independent redistricting commissions that drafted new maps in Michigan, Colorado and a handful of other states.

The state court rulings and smattering of new maps from independent commissions this year were bright spots in an otherwise bleak picture, said Paul M. Smith, the senior vice president of the Campaign Legal Center, an advocacy group involved in redistricting battles.

“But we don’t know how consequential they will be until we see how the Supreme Court rules,” he said. “The end of the story hasn’t been written yet.”