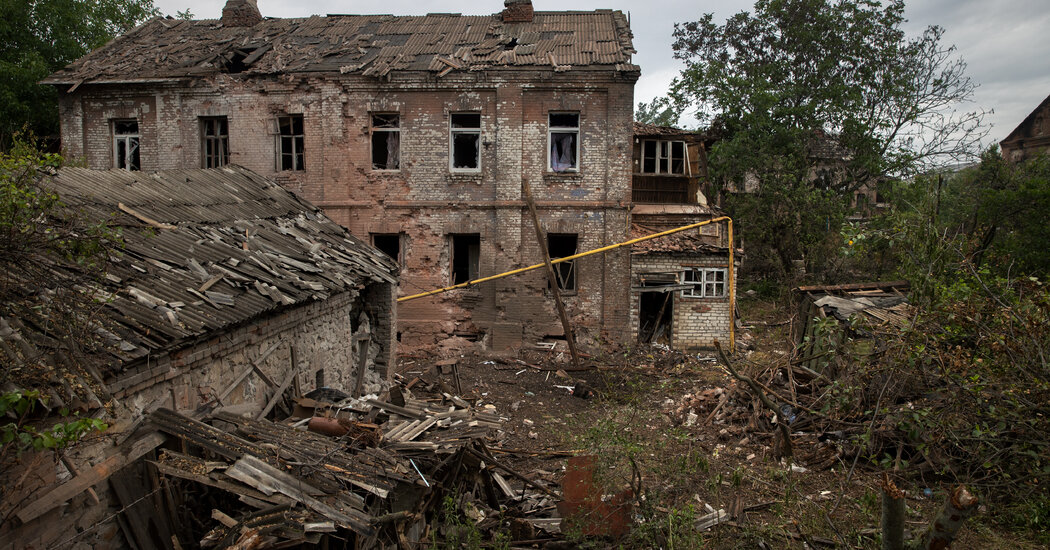 LYSYCHANSK, Ukraine — Vicious fighting raged in Sievierodonetsk on Wednesday after the destruction of a key bridge there in recent days all but cut off the Ukrainian troops fighting to hold the strategically important eastern city.

In the neighboring city of Lysychansk, separated from Sievierodonetsk by a river, Ukrainian forces were using the high ground there to fire at Russian forces on the opposite bank. New York Times journalists in Lysychansk could see and hear heavy artillery fire coming from both directions through a light rain.

Ukrainian mortar teams moved around Lysychansk, firing several rounds in each place before relocating to avoid the Russian return fire that was sure to follow. On the city’s periphery, a Ukrainian Grad rocket launcher emerged from its forested hiding place, unleashing about a dozen rockets toward Sievierodonetsk. A plume of smoke from the igniting munitions drifted into the air.

For Ukrainian officials and forces, it is battles like this in eastern Ukraine that have driven urgent pleas to the West to provide more long-range artillery and other weaponry to help close the gap with Russian units. On Wednesday, the United States and its allies promised even more arms to come. But in cities that had once been havens, the scorched earth tactics with those kinds of weapons from the Russian side have been devastating for the civilians still stuck here.

At a destroyed bridge in Lysychansk — one of several over the Siversky Donets River that once connected the city to Sievierodonetsk — the surrounding neighborhood looked as if artillery shells had blasted nearly every foot of ground. It was evident that the Russians had spent volumes of ammunition to destroy the crossing, leaving the area devastated. Civilians picked through the wreckage on Wednesday while stray dogs barked incessantly.

“This is horror, this is horror,” said Natalia, 52, a former music teacher in Lysychansk who declined to give her last name for security reasons. “My daughter is 32; my granddaughter is 12. They left as soon as it had started.”

Lysychansk, an industrial city with a prewar population of about 100,000, has started to empty out as Russian forces have taken large parts of Sievierodonetsk and have begun shelling Lysychansk regularly.

Evacuations from Sievierodonetsk have been disorganized, leaving residents to find their own means of escape. But in Lysychansk, volunteers, in a medley of vehicles, are evacuating dozens of civilians each day.

One organization, called BASE UA, is crewed by a mixture of Ukrainian and Western volunteers, including several Americans. In donated armored vans, the volunteers make several trips a day to reach civilians, braving the enduring threat of artillery fire.

Local officials estimate that there are between 30,000 and 40,000 civilians still in Lysychansk. In Sievierodonetsk, about 10,000 civilians remain, including 500 people who are sheltering with Ukrainian troops in the city’s Azot chemical plant.