A Striking Contrast: Trump Officials Then and Now 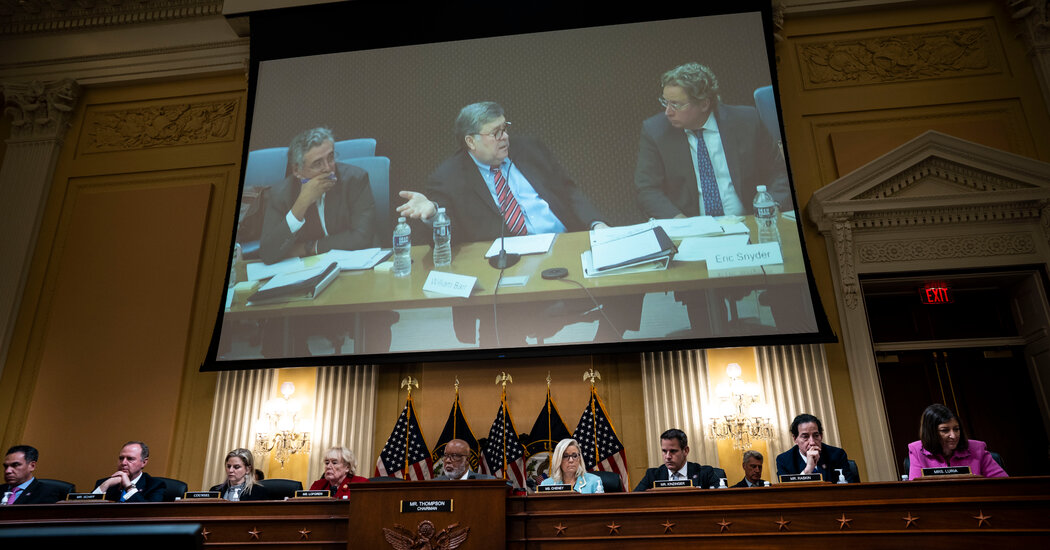 The letter was lavish.

When William P. Barr stepped down as attorney general in December 2020, he showered President Donald J. Trump with praise for his “unprecedented achievements” and vowed that the Justice Department would continue to pursue the president’s claims of voter fraud “to ensure the integrity of elections.”

A year and a half later, Mr. Barr sounds different. In videotaped testimony played at the first two public hearings held by the House committee investigating the Jan. 6 attack on the Capitol, Americans have now learned what Mr. Barr avoided saying publicly about Mr. Trump at the time.

“I was somewhat demoralized,” Mr. Barr said in testimony played on Monday, describing his reaction to a monologue from Mr. Trump in December 2020 that the voting machines were rigged. Mr. Barr’s thinking, he said, was that the president had “become detached from reality if he really believes this stuff. On the other hand, when I went into this and would tell him how crazy some of these allegations were, there was never an indication of interest in what the actual facts were.”

Mr. Barr’s testimony and that of several aides played at the hearing were a candid, more brutal version of what they were saying in public shortly after the election.

Bill Stepien, Mr. Trump’s campaign manager, and Jason Miller, a top adviser, testified to the committee that they failed to keep Rudolph W. Giuliani, Mr. Trump’s personal lawyer, away from him on election night. Mr. Giuliani, whom Mr. Miller described as “definitely intoxicated,” told Mr. Trump that he should declare victory. “It was far too early to be making any calls like that,” Mr. Stepien testified.

Mr. Stepien also testified that it became clear after the election that Mr. Trump did not have any realistic avenue to overturn the election.

But in the days immediately after the vote, he did not publicly challenge Mr. Trump or Mr. Giuliani. And two days after Election Day, Mr. Miller raised the idea on a call with reporters that mysterious bags of ballots were showing up in states Mr. Trump was still contesting.

Review the Themes of the Jan. 6 House Committee Hearings

Both appeared to believe that there was an opportunity for challenges that passed in the middle of November. Both continued working with the campaign, but receded from the forefront as Mr. Trump put Mr. Giuliani in charge of the efforts to overturn the results.

The change for some of the aides reflects the legal consequences of lying to a congressional committee, and how much Mr. Trump’s grip on his former aides has loosened in the 17 months he has been out of office.

The testimony so far reflects only what has been released publicly, and it is unclear what else the committee may have. In books written about the election in the last year, Mr. Trump’s aides are portrayed as believing the data showed a likely victory until the afternoon of Nov. 5, when it changed.

Mr. Barr, who testified to the committee voluntarily, spoke on the record to Jonathan Karl of ABC News in 2021 about his exasperation with Mr. Trump’s claims of fraud. Mr. Barr also recounted tense private conversations with Mr. Trump in his memoir this year.

In other cases, people such as Mr. Trump’s son-in-law, Jared Kushner, and daughter Ivanka began to look toward a life after the White House in Florida, while staying inside the administration. They tried to solidify policy issues they had worked on and, according to their colleagues, said little to try to dissuade Mr. Trump from his bid to stay in power.

And yet they remained silent in public as the president, his advisers and political allies pushed the claims on Americans and used them for fund-raising for Mr. Trump.

“After the election, he’s advised by his own people not to go out and declare victory, that they needed time for the votes to come in,” said Representative Zoe Lofgren, Democrat of California, who led the questioning at the second committee hearing on Monday.

She added: “They directly told the president over and over again, they were false. These were his people. This is Trump World, telling the president that what he was saying was false. And he continued to say the same thing.”

Mr. Barr’s testimony amounted to a beleaguered former top cabinet official contending with Mr. Trump’s raft of unsubstantiated allegations about fraud that he wanted his government to run down.

“It was like playing whack-a-mole because something would come out one day and then the next day it would be another issue,” Mr. Barr said. He also detailed in his testimony how he told an Associated Press reporter on Dec. 1 that the department had found no evidence of widespread fraud that would have changed the election’s outcome.

Still, his resignation letter underscored the degree to which officials appeared to believe they needed to tiptoe around Mr. Trump.

But the testimony of Mr. Stepien and Mr. Miller made clear that they had at least tried to warn Mr. Trump how election night was likely to go, with early returns in his favor but a potential wave of Democratic votes coming later when the mail-in ballots were counted.

Mr. Miller said that when the campaign learned on election night that Fox News had called Arizona for Joseph R. Biden Jr., he and other campaign aides were angry and disappointed, but also concerned “that maybe our data or our numbers weren’t accurate.”

But on the call with reporters two days after Election Day, Mr. Stepien sound adamant. “The media and the insiders in this city have been trying to count Donald Trump out for years,” he said. “Donald Trump is alive and well.”

At another point, he said, “Exactly what the president said would happen is happening.”