A Timeline of Failed Attempts to Address U.S. Gun Violence 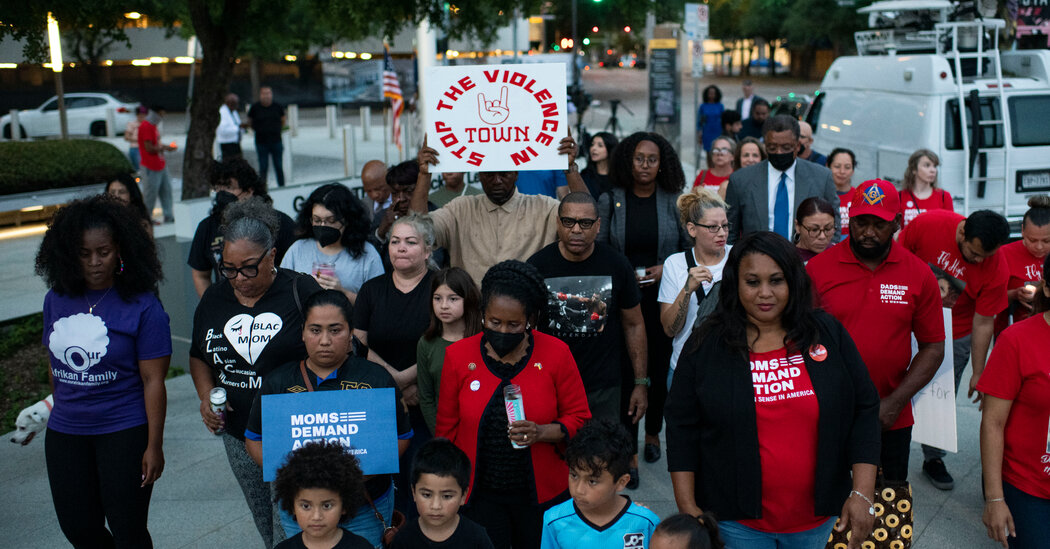 For more than a decade, as mass shooting has followed mass shooting in the United States, Democrats in Congress have proposed gun restrictions to try to prevent the next tragedy, hoping that the fresh outrage and anguish of another massacre would finally yield some consensus.

Each time — after gun massacres at concerts, grocery stores, a Bible study and, most wrenchingly, elementary schools — they have failed amid Republican opposition.

“We have these truly horrific moments, and then it seems like very little happens because of Republicans in Congress doing the gun lobby’s bidding,” said Robin Lloyd, the managing director of the Giffords Law Center to Prevent Gun Violence.

“We have had the biggest challenges in getting something done at the federal level,” she added, noting that there has been more action in the states, with more than 450 pieces of legislation signed into law since the 2012 massacre at Sandy Hook Elementary School in Newtown, Conn.

Here is a look at a decade’s worth of failed efforts in Congress to address gun violence after mass shootings.

On Dec. 14, 2012, a gunman killed 26 people, including 20 6- and 7-year-old children. It was the deadliest shooting at an elementary, middle or high school in the country’s history.

What was proposed: A bill by Senator Joe Manchin III, Democrat of West Virginia, and Senator Patrick J. Toomey, Republican of Pennsylvania, to strengthen criminal background checks on gun buyers.

What happened: After the massacre, President Barack Obama made an urgent call for gun safety measures and deputized his vice president, Joseph R. Biden Jr., to lay the groundwork for the effort. Democrats drafted legislation to expand background checks, as well as an assault weapons ban and a measure to limit the size of gun magazines.

The background-check proposal appeared to have the best chance of bipartisan buy-in, but talks stretched on for months with no deal. The one that was finally struck lost support as the vote neared, amid an intense lobbying effort by the National Rifle Association, which claimed that it would create a national gun registry even though the bill explicitly outlawed the creation of one.

Mr. Obama said that the day of the failed vote was a “shameful day in Washington.”

How they voted: On a vote of 54 to 46 in the Senate, the measure fell short of the 60-vote threshold to overcome a filibuster. Five Democrats joined a majority of Republicans in opposing it.

What happened: With Republicans in control of both chambers of Congress, no hearing or vote was held.

How they voted: Did not receive a floor vote in the House or Senate.

A married couple, described by federal officials as supporters of the Islamic State, fired automatic weapons at community members at the Inland Regional Center in San Bernardino, Calif., killing 14 people.

What was proposed: A clone of the Manchin-Toomey bill to extend criminal background checks to guns purchased online and another bill, by Senator Dianne Feinstein, Democrat of California, to bar individuals on the terrorism watch list from buying firearms.

What happened: Days after the shooting, Democrats proposed the legislation. Republicans countered with their own alternatives, one that would have given the attorney general the power to impose a 72-hour delay for individuals on the watch list seeking to purchase a gun, and another to outlaw so-called straw gun purchases and gun trafficking, and to create incentives for states to provide mental health records to a national database.

How they voted: The Senate rejected Mr. Manchin’s measure on a 50-to-48 vote. Ms. Feinstein’s failed 54 to 45, with one Democrat joining Republicans in opposition. Both Republican measures also failed.

Nearly 50 people were killed at the Pulse nightclub in Orlando, Fla., by a gunman claiming allegiance to the Islamic State.

What was proposed: Four competing proposals, mirroring those considered after the San Bernardino shooting.

What happened: Eight days after the shooting, the Senate deadlocked, largely along party lines, on amendments to block people on the federal terrorism watch list from buying guns and to close loopholes in background check laws.

How they voted: All four measures failed to gain 60 votes, the threshold for advancing most legislation in the Senate, mostly along party lines.

A lone gunman perched on the 32nd floor of a high-rise hotel suite opened fire at a concert on the Las Vegas Strip in the deadliest mass shooting in modern American history.

What was proposed: A bipartisan ban on “bump stocks,” which allow a semiautomatic rifle to fire hundreds of rounds per minute.

What happened: When it was revealed the gunman outfitted his firearms with bump stocks, members of both parties moved to ban the devices.

But the efforts in Congress stalled. The Trump administration eventually enacted a ban through regulations.

How they voted: Did not receive a floor vote.

During a 2017 shooting in Texas, a gunman opened fire at the First Baptist Church in Sutherland Springs, killing 26 people. The gunman was able to purchase his weapons despite a domestic violence conviction.

What was proposed: The Fix NICS Act, the rare bipartisan piece of gun legislation backed by the N.R.A., made modest improvements to the background checks system, requiring states and federal agencies to do a better job reporting legal and mental health records to the National Instant Criminal Background Check System.

What happened: The measure, which gun control advocates describe as important but extremely modest, passed as part of a giant 2018 catchall spending bill. President Donald J. Trump signed it into law.

What was proposed: Senator Marco Rubio, Republican of Florida, introduced a “red flag” bill, seeking to give law enforcement the ability to restrict gun access for unstable and potentially violent people.

The Trump administration also issued a new rule banning bump stocks, the attachments that enable semiautomatic rifles to fire in sustained, rapid bursts and that the gunman in the Las Vegas massacre used.

What happened: Students took the lead pushing for action after the tragedy. But they made little headway in Congress, with Republicans in control of the Senate.

The only significant federal change was a ban on bump stocks that had already been under review at the Justice Department. (The gunman in the Parkland massacre did not use a bump stock.)

How they voted: Mr. Rubio’s bill, which he has reintroduced twice, never received a floor vote.

A man wearing body armor shot and killed nine people, including his sister, in Dayton, Ohio, hours after a gunman with a rifle entered a Walmart in El Paso and killed 23 people in August 2019.

What was proposed: Democrats and a handful of Republicans proposed taking up House-passed legislation to expand criminal background checks of gun purchasers to gun shows and online sales, and to extend the time the F.B.I. has to complete background checks.

What happened: Immediately after the shootings, Mr. Trump opened the door to expanded background checks and other proposals to keep guns away from unstable people.

The Justice Department also began circulating a proposal that would expand background checks to include all sales at gun shows, but the key Republicans on Capitol Hill viewed the idea with skepticism.

Senator Mitch McConnell, the majority leader at the time, insisted that he would not take up any legislation unless Mr. Trump agreed to sign it into law.

Mr. Trump backed away from his position, saying that sufficient background checks were in place and the focus should instead be on mental health.

How they voted: No floor vote on any legislation took place.