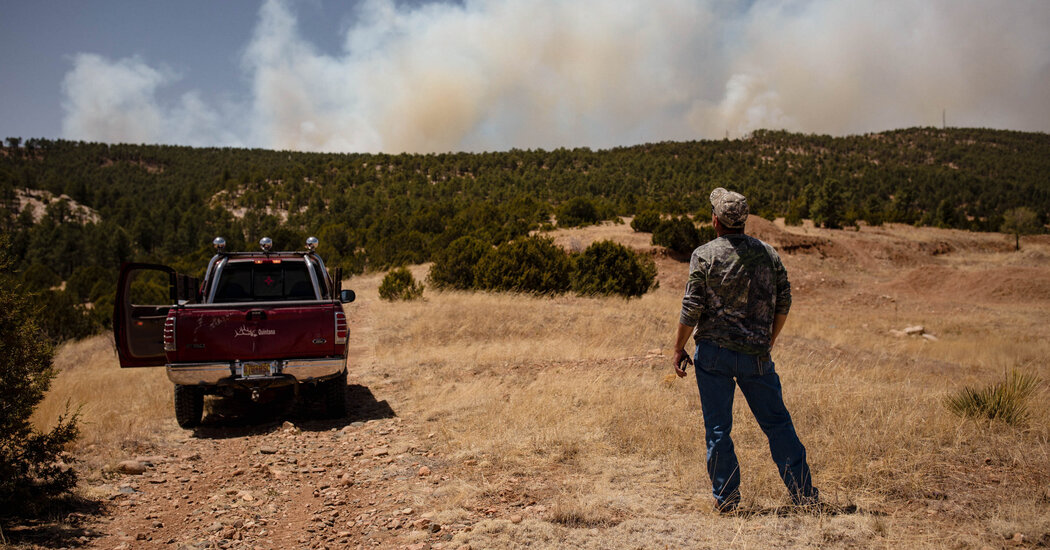 The American West is burning more quickly than it has in a decade. New Mexico has been fighting its two biggest wildfires on record for more than a month. About 3 million acres of U.S. land — almost the size of Connecticut — have already burned this year. And with summer starting tomorrow and a widespread heat wave already in place, the burning is likely to get worse.

The changing climate has created a troubling reality, ecologists and foresters said: Wildfire seasons have turned into wildfire years, starting earlier in the spring and sometimes lasting well into the following winter.

Consider the number of wildfires that have occurred between January and mid-June over the past 10 years:

These fires have also gotten more severe. California experienced two of its largest in the past two years: The Dixie Fire in 2021 burned almost a million acres, and the August Complex fire in 2020 surpassed a million acres.

More frequent and intense fires are dangerous. They emit smoke that can damage the lungs of people who live hundreds or even thousands of miles away. They burn through homes, crops and even centuries-old cultures, causing tens of billions of dollars in economic damage.

Today’s newsletter will explain why these large blazes have become so prevalent and what experts think it will take to reverse the trend.

How we got here

Wildfires have burned the West for thousands of years, but they’ve become far more hazardous because of human activity.

People cause the vast majority of wildfires (about 96 percent so far this year), and people have also gone to great lengths to fight them, only to set the table for more fires. Paul Hessburg, an ecologist with the U.S. Forest Service, explained that the nation’s well-intentioned strategy of suppressing fires over the past century has created an unnatural buildup of materials that act as kindling for wildfires: twigs, grasses, shrubs, trees, even houses.

Fires early in the year have become increasingly common as the American West has dried out and temperatures have risen. Winters are warmer, providing less relief from heat.

On mountaintops, winter snow, which can slow down wildfires by adding moisture to forest wood, has begun to melt earlier in the spring and more quickly. High winds have further dried out kindling and sped up wildfire movement.

The years of warming, droughts and high winds in the West have worked in tandem with forest fuel buildup, Hessburg said, to “set the dining room table for the situation we have right now.”

Removing a wildfire’s fuel source ahead of time is the main way to prevent or reduce its impact, experts said. One option is to manually thin forests with saws, rakes and bulldozers. Another is prescribed fires, which are intentionally set to consume dead brush and small trees at a much lower intensity.

These two methods can also be combined, but both take planning and technical know-how. Manual thinning can be slow and laborious. Prescribed burnings must happen under the right weather and fuel conditions (made rarer by climate change) to limit the risk of an out-of-control burn.

And there are challenges with public trust. Local residents who fear smoke-filled air have fought more prescribed burning. And occasionally, as happened in New Mexico this spring, erratic winds can propel a prescribed fire beyond firefighters’ control.

Experts agree that wildfire management should be far more proactive. They offer a number of ideas: easing restrictions on prescribed burnings, increasing prescribed burnings or even letting wildfires burn for a while when they’re not threatening lives or livelihoods.

The experts acknowledge that their suggestions would have to overcome residents’ fears and political challenges. But they warn that if nothing is done and landscapes full of trees, leaves and brush go untreated, wildfires will only get worse.

If you think you don’t like rosé, explore different types, especially if you’ve only had the very pale rosés that are in vogue or tasted ones that seemed insipid or too sweet. “You might find that, actually, you’ve been missing something all these years that’s quite delicious,” Eric says.

Head to a serious, independently owned wine shop, and ask for help, he says. “What’s imperative is to actually talk to the people at the store, who tend to really care about what they sell and who want to make people happy.”

And here are Eric’s picks of 12 exceptional rosés from $13 to $35. — Natasha Frost, a Briefings writer