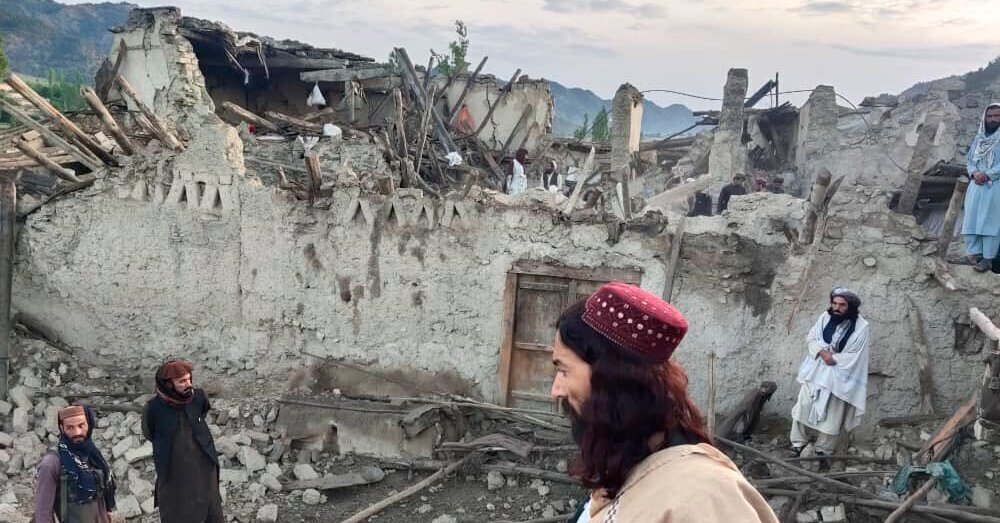 KABUL, Afghanistan — At least 1,000 people were killed and more than 1,500 others injured after a 5.9-magnitude earthquake struck a remote and mountainous region of southeastern Afghanistan near the border with Pakistan early Wednesday, the state-run Bakhtar news agency said.

The quake struck about 28 miles southwest of the city of Khost, a provincial capital in the country’s southeast, the United States Geological Survey said, and had a depth of about six miles. Raees Hozaifa, the director of information and culture in the eastern province of Paktika, said the earthquake was felt across several provinces.

Some of the areas hit by the earthquake are in remote rough country near the Pakistani border that were the scene of heavy fighting before and after the Taliban takeover of Afghanistan, and telecommunications are poor or nonexistent, making it hard to get a full accounting of the casualties. An aid official said that he expected the number of dead to be much higher.

Mohammad Almas, the head of aid and appeals at Qamar, a charity in Afghanistan active in the area, said he expected the death toll to be high, as the area is far from hospitals and because the earthquake happened at night, when most people were indoors sleeping.

As many as 17 members of the same family were killed in one village when their home collapsed, he said; only one child survived. He said that more than 25 villages were almost completely destroyed, including schools, mosques and homes.

In the Sperah district of Khost Province, northeast of Paktika Province, the earthquake killed at least 40 people and wounded 90 others, Shabir Ahmad Osmani, Khost’s provincial director of information and culture, said by telephone.

Rafiullah Rahel, the head of the health department in Paktika Province, said that 381 people were dead and 205 injured in that province.

It was not immediately clear whether the figures given by the provincial officials were early estimates, or if large numbers of casualties had been recorded elsewhere.

The Bakhtar news agency posted video footage on Twitter of a helicopter landing in what it said was a quake-hit area. It said that ambulances were transporting the injured to hospitals.

Sarhadi Khosti, 26, who lives in the Sperah district, said he had been woken up by the earthquake after 1 a.m., and that a number of houses — especially those made of soil or wood — had been completely destroyed. He said that helicopters had transported some of the wounded to hospitals in Kabul and neighboring provinces.

“For now, we still are busy pulling the dead or injured from under the rubble,” he said.

Dr. Ramiz Alakbarov, a deputy special representative for Afghanistan for the United Nations, wrote on Twitter that the organization was assessing the situation in the aftermath of the earthquake. Dr. Tedros Adhanom Ghebreyesus, director general of the World Health Organization, said on Twitter that the agency would “continue supporting people in need across the country.”

The quake struck about 300 miles north-northeast of the site of a deadly 6.4-magnitude earthquake in Pakistan in 2008, the U.S.G.S. said. More than 200 people were reported killed at the time.

The earthquake was felt in Kabul, the Afghan capital, and across the northern part of neighboring Pakistan, according to a map that the European Mediterranean Seismological Center posted on its website. The U.S.G.S. said that a second quake, of 4.5 magnitude, struck about 30 miles southwest of Khost about an hour later.

The earthquake was felt in Islamabad, the Pakistani capital, and Peshawar, the provincial capital of northwestern Khyber-Pakhtunkhwa Province, where panicked people rushed out of their houses, reciting verses from the Quran.

However, no large-scale damage or casualties were reported, according to the provincial disaster management authority. Earthquake jolts were also felt in some parts of Punjab Province.

Rescue officials said one person was killed because of a roof collapse after the earthquake in the Lakki Marwat district of the northwestern Khyber-Pakhtunkhwa Province. Several mud houses were also reported to be damaged in the province, which borders Afghanistan.

Prime Minister Shebaz Sharif of Pakistan said he was “deeply grieved” to learn about the earthquake. In a statement, Pakistan’s Foreign Ministry said that it was working to provide help to Afghanistan. “The people of Pakistan stand in strong solidarity with their Afghan brethren in this difficult time,” the statement said.

Mr. Sharif said he had issued directives to the Pakistani authorities to provide necessary relief assistance to the government of Afghanistan. “We are deeply saddened by the damage caused by the earthquake, especially in the Paktika region,” he said.

For civilians in Afghanistan, earthquakes are yet another risk in a country traumatized by decades of war. Many of the country’s densely populated towns and cities sit on or near several geological faults, some of which can produce earthquakes of up to 7 in magnitude.

The earthquake on Wednesday, according to the U.S.G.S. appeared to originate from movement between the India and Eurasia tectonic plates.

The agency said in a 2022 report that more than 7,000 people had died in the past decade because of earthquakes, an average of 560 people a year. In one area between Kabul and Jalalabad, it estimated that an earthquake of 7.6 would affect seven million people.

In January, two earthquakes struck a remote, mountainous area of western Afghanistan, killing at least 27 people and destroying hundreds of homes, officials said at the time. Another earthquake in 2015 killed more than 300 people in northern Afghanistan and Pakistan and destroyed thousands of homes.