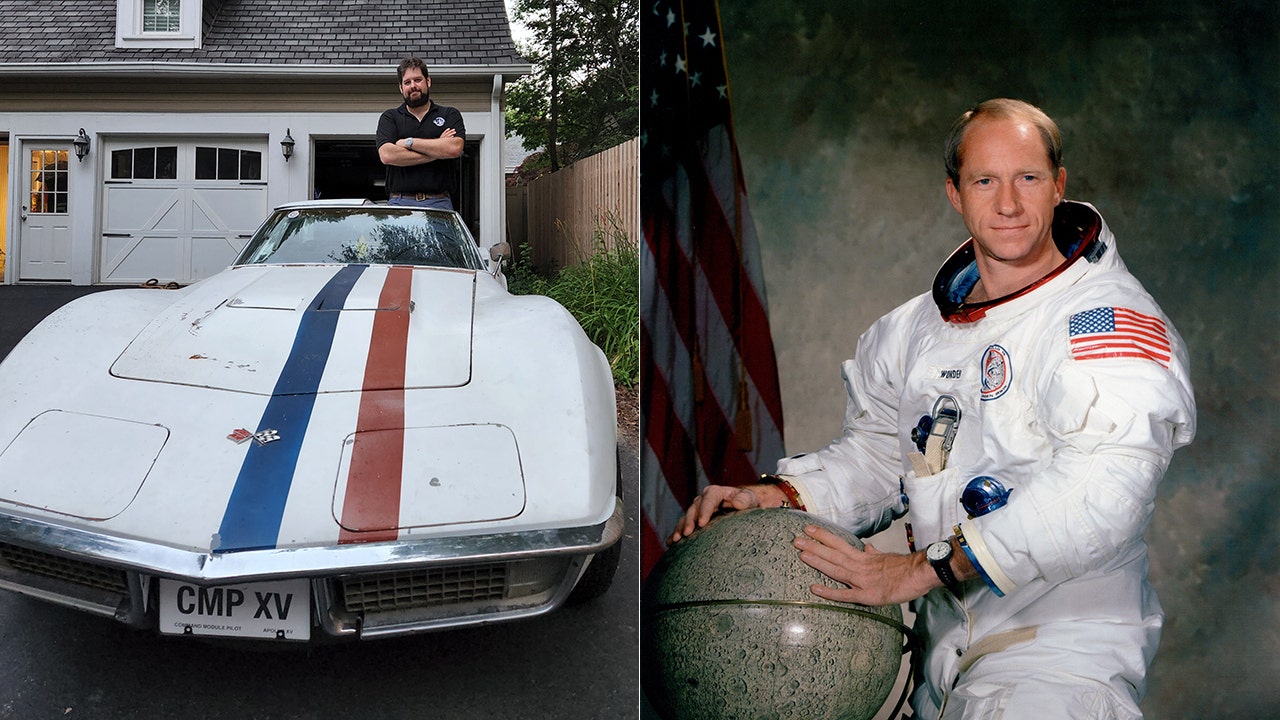 A 1971 Chevrolet Corvette originally driven by Apollo 15 astronaut Al Worden, which was all but forgotten and left to the elements on a used car lot for years, will soon be ready to hit the road again.

The coupe was one of three that were leased to the mission’s crew for a year for just $1 each by Melbourne, Florida, Chevrolet dealer and 1960 Indy 500 winner Jim Rathmann.

Rathmann had been leasing Corvettes to astronauts since the Mercury program, fully aware of the promotional value of having American heroes cruising around in his cars, but the Apollo 15 crew was the last.

Command module pilot Worden and his crewmates, James Irwin and David Scott, ordered theirs in red, white and blue with coordinating stripes. Worden chose a white one with a 454 cubic-inch V8 under the hood and a Muncie 4-speed manual transmission.

He returned it at the end of the lease, and it was sold into private ownership, changing hands several times and ending up in Texas.

That’s where noted Corvette collector Danny Reed discovered it and added it to his collection in 2017, officially documenting its history in the process.

Reed also owns Apollo 12 astronaut Alan Bean’s 1969 Corvette, which he purchased directly from GM in 1971, along with Dave Scott’s blue 1971 model. Worden’s car was functional when Reed found it but very weathered from sitting outside for who knows how many years.

Max Kaiserman, the owner of space program merchandise marketplace Luna Replicas and friend of Worden’s, told Fox News Autos that Worden’s grandson, Will Penczak, found out about the car and visited it at Reed’s in 2020. Worden passed away the same year, and Penczak and Reed got to talking about what should happen to the car.

Kaiserman and Penczak decided to team up and purchase it; not to fix and flip it at an auction but to become its custodians and share it with the world. They’ve now started Project AstroVette Endeavor and plan to restore it to some extent and use it as an educational tool by displaying it at science museums and other events.

“We want to continue Al Worden’s legacy of inspiring young people to get into science and math and the arts, all of which the space program and the Corvette represent,” Kaiserman said.

The 80,000-mile car currently runs and is mostly-rust free, but it’s had some minor repairs and a few parts replaced over the years, so they’re still deciding what to do with it. Whether to preserve it as-is or bring it back to as close to original condition as possible.

Worden’s Corvette has been repaired but not restored.
(Max Kaiserman)

A refresh to the standards of the National Corvette Restorers Society could run over $100,000, according to Kaiserman, while an extensive rotisserie show car-quality restoration might cost a quarter-million or more.

They’re open to any support for the project and are also asking anyone with photos of the car from the 1970s to share them to help get a better sense of its original condition, right down to what tires were on it when Worden had it. As of now, they only have one photo from Life magazine featuring the three astronauts and their cars parked behind the mission’s Lunar Roving Vehicle, which was the first to go to the moon.

“How incredible is that the first astronauts to drive on the moon were also the last to drive Rathmann Corvettes,” Kaiserman said.

“I believe he would be thrilled to know that his AstroVette was not only being restored but being done so with the help of his grandson. And he would certainly want to be in the driver’s seat again when it is ready to hit the road.”