As China Rattles Sabers, Taiwan Asks: Are We Ready for War? 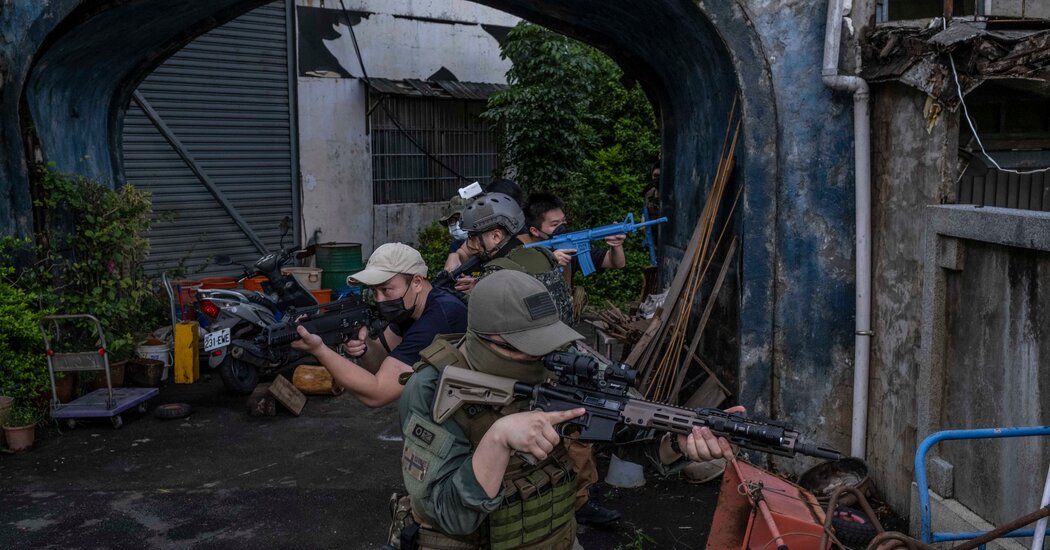 TAIPEI, Taiwan — Russia’s brutal war in Ukraine has jolted Taiwan into confronting the specter of a sudden attack from the island’s own larger and more powerful neighbor: China.

The invasion has given new weight to the authoritarian vision of China’s leader, Xi Jinping, who has long laid claim to self-governed Taiwan for the “rejuvenation” of China — much as President Vladimir V. Putin of Russia did with Ukraine. To many in Taiwan, Ukraine has been a lesson in the tactics and weaponry that could slow a more powerful invading force. It has also been a stark warning that the island may be inadequately prepared for a full-scale attack.

Taiwan’s defenses are, by many accounts, ill-equipped and understaffed. Its president, Tsai Ing-wen, has vowed to defend the island, but she has struggled to impose a new strategic vision on the uniformed leadership.

Taiwan spends billions on fighter jets and submarines, yet its conscripts barely get enough ammunition for training. The mandatory military service is seen by many as too short, and the reservist program, insufficiently rigorous. The military is building a professional force, but has struggled to recruit and retain highly skilled soldiers.

Now, Ukraine has been an impetus for change.

When Wu Chiuan-syun, a computer engineer in Taipei, gathered with other army reservists in a dense, humid forest in central Taiwan in March, they trained longer and harder than soldiers like them had in recent years. Nearly every day, he said, his commanders would remind the men that the threat from China was growing.

“Ukraine showed us that you need to first show to others that you have the resolve to defend yourself; only then will others come and help,” Mr. Wu, 31, said.

Underlying Taiwan’s defense dilemma is a question left unanswerable by design: Will the United States send military forces to Taiwan’s aid? In May, President Biden suggested he would, but the United States offers no explicit security guarantees, a strategy it hopes will avoid either provoking Beijing or emboldening Taiwan to declare formal independence.

Mr. Xi has said he seeks a peaceful unification with Taiwan, and he may be deterred by the huge economic and diplomatic blowback China would suffer for an invasion. But China has also been pointed in its warnings. Its defense minister, Gen. Wei Fenghe, said over the weekend that Beijing would “fight to the very end” for Taiwan. It is sending fighter jets toward the island almost daily — including 30 aircraft in one day last month alone.

The concern is that such maneuvers could, intentionally or otherwise, be a prelude to conflict.

“We cannot wait; we are competing with time,” said Michael Tsai, a former defense minister of Taiwan. “Russia’s invasion of Ukraine happened in an instant — who knows when the P.L.A. might choose to invade Taiwan.”

Several military drills conducted in January were intended as a show of force to China — to demonstrate how Taiwan planned to stop invaders from intruding on its airspace, landing on its beaches and, in the worst case, taking over its cities.

At an air base in central Taiwan, a siren wailed, and within minutes pilots were taking off in F-16 fighter jets to ward off intruders. Off the northern coast, the navy debuted new mine-laying craft as two small warships fired live ammunition. In a southern city, smoke filled the air as soldiers practicing urban combat shuffled past fake storefronts of bubble tea shops and cafes, exchanging gunfire with combatants.

The drills also reflected a continuing conflict at the heart of Taiwan’s defense strategy.

The original idea, after Nationalist leaders fled to Taiwan in 1949, was to one day reclaim the mainland. For decades, even as that prospect dimmed, Taiwan had approached the threat of an invasion by China by buying or developing traditional, expensive weapons, like the fighter jets showcased at the air base. But Taiwan has been outgunned by China, which invested heavily to build what is now one of the world’s largest militaries.

Seeing the growing imbalance, American officials and some Taiwan strategists have recently accelerated efforts to push Taiwan to instead amass a large number of smaller weapons. That includes naval craft such as the ships in the drill that can quickly lay sea mines to block forces trying to land.

Advocates of the strategy argue that Taiwan, like Ukraine, could easily deploy Stinger missiles, which can be shoulder-launched at aircraft, and portable Harpoon missiles, which can attack ships. Unlike tanks and large battleships, these are hard to target and destroy.

“The idea is to become so hard to swallow that the enemy thinks twice about launching any action,” said Lee Hsi-min, former chief of Taiwan’s Navy and chief of the general staff, who has been among the most vocal proponents in Taiwan for the so-called asymmetric approach.

An all-out assault on Taiwan, involving air, naval and land forces, would be more complex than Russia’s invasion of Ukraine, but some American and Taiwanese defense officials think that in the coming years Beijing would be able to pull it off.

The hope is that if deterrence fails, the so-called porcupine strategy could allow Taiwan to buy time for the United States to possibly help. President Tsai said in 2019 that Taiwan would be able to hold out for 24 hours, and that China would then face international pressure.

Ms. Tsai has purchased Harpoon missiles and other weapons in line with the strategic shift, but she faces resistance from some military leaders. They argue that smaller weapons are not useful for standing up to China in visible ways. Long-range missiles capable of striking the mainland could deter Beijing, the military leaders say. Fighter jets can respond when Chinese forces buzz near Taiwan. The larger platforms are also politically popular.

Should China invade, Taiwan’s defenses will almost certainly crumble unless the United States and its allies help. Some in Taiwan consider it too risky to give up their most lethal weapons without concrete promises of support.

“We can’t be sure that the U.S. will come to rescue us,” said Ou Si-fu, a research fellow at the Institute for National Defense and Security Research, a think tank affiliated with Taiwan’s defense ministry. “Hence, Taiwan needs some strike capabilities. Otherwise, you are binding your hands and waiting to die.”

Last fall, Hu Yu-huan, 25, reported for his mandatory military service, eager to learn how to defend his homeland. What he found was not boot camp but summer camp.

When he and his fellow conscripts jogged, the pace was set by the slowest man, who tired after 100 yards. They spent hours clearing weeds and sweeping. Mr. Hu, a half-marathon runner, said the four months of service left him 13 pounds heavier and in “the worst shape of my life.”

As Taiwan democratized in the late 1980s, newly elected officials cut the defense budgets, leading to a shrinking force. Taiwan has only around 169,000 active-duty military personnel and around 2 million reservists, compared with China’s two million active-duty soldiers.

The island’s leaders have been seeking to phase out conscription in favor of a professional all-volunteer force. Taiwan’s defense ministry said in a statement that it had reached more than 95 percent of its recruitment goals last year. But experts say the military’s authoritarian legacy, along with the relatively low pay, has made it hard to attract skilled recruits.

Combat training has also been widely criticized as perfunctory, whether for the men over 18 doing mandatory service, like Mr. Hu, or for the reservists. Three decades ago, conscripts had to train for up to three years and run about three miles a day. Now, they serve for four months and run fewer than two miles per day, if at all, according to experts and recent trainees.

Europe recalculates. With Ukraine pressing Western allies for more arms, European leaders are under mounting pressure to forge a cohesive strategy on when realistic negotiations might begin to end the war. Some allies are becoming increasingly nervous about a long war that puts NATO into conflict with Russia.

Col. Sun Li-fang, a spokesman for Taiwan’s defense ministry, said that physical fitness requirements for conscripts were eased in line with scientific guidance and the military had to take safety into account in designing its training.

The Tsai administration is considering extending the length of military service to up to a year. It is testing a refresher program for reservists that is two weeks long instead of one, with more hours spent on combat training.

Mr. Wu, the computer engineer, was among the first to take part in the new program. In addition to shooting practice, Mr. Wu said, he and the other reservists trekked on mountain roads to test the group’s ability to carry heavy weapons for long periods of time. By the end, Mr. Wu said, he felt ready for war.

‘The Tip of the Spear’

On Taiwanese talk shows, pundits and officials debate the probability of a Chinese invasion. In the legislature, lawmakers fret about the preparedness of Taiwan’s troops. In messaging groups, activists discuss ways to involve the public in the island’s defense.

The new urgency reflects a sharp change in attitudes in Taiwan, where many had long been indifferent to China’s advances, resigned to defeat or blindly optimistic about support from the United States.

Ms. Tsai has sought to leverage the Ukraine conflict to push her agenda. She appointed a team of experts to study Ukraine’s strategy. The question is whether she can push through potentially unpopular changes, such as further raising military spending, currently at just over 2 percent of Taiwan’s gross domestic product.

“We cannot see the suffering of the Ukrainian people as news only,” said Alexander Huang, a professor at Tamkang University’s Institute of International Affairs and Strategic Studies. “It’s got to be a lesson that we need to learn.”

Mr. Lee, the former navy chief, and others have urged Taiwan to create a territorial defense force made up of civilians, similar to that of Ukraine’s.

A trained civilian force could be the “tip of the spear” in Taiwan’s defense, said Enoch Wu, founder of Forward Alliance, a nongovernmental group that holds civil defense workshops. “That’s what’s going to make or break Taiwan.”

Some citizens are making their own preparations.

On a recent Saturday, about two dozen people simulated a gunfight in a parking lot near Taipei in a class run by PolarLight, a company that teaches basic first aid and shooting skills, using realistic airsoft guns. They crept around parked cars and buses, aiming their airsoft rifles at imaginary opponents. Some fell to the ground, while others rushed in to move them to safety and apply tourniquets.

Danny Shi, a 21-year-old student at a military academy, said that he had signed up because he was worried that he was not getting enough practical experience at school. He said he wanted to be ready for the worst.

“As a Taiwanese person,” he said, “I think we should be more serious about preparing for war.”