Belmont Stakes 2022: What to know about the final and longest leg of horse racing’s Triple Crown 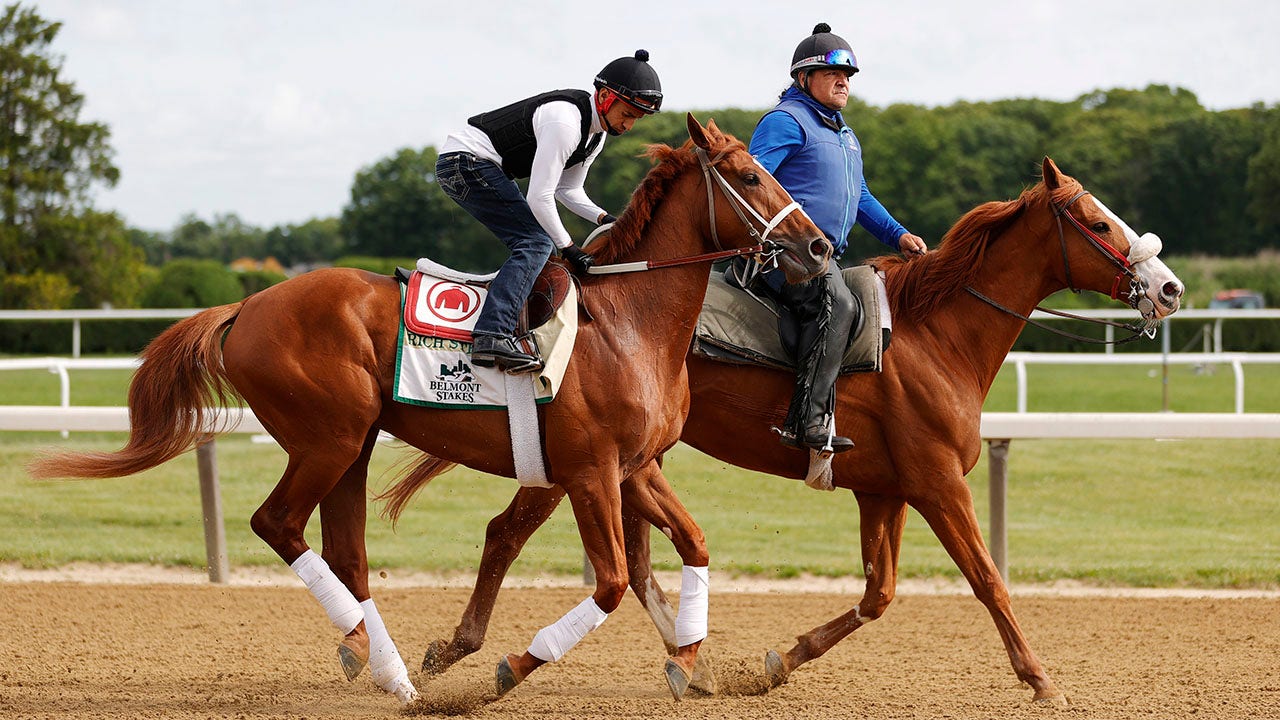 The 154th Belmont Stakes is the third and final leg of horse racing’s Triple Crown, and will take place Saturday evening at Belmont Park in Elmont, New York.

There will be no chance of a horse winning the Triple Crown this year, after Kentucky Derby winner Rich Strike did not race in the Preakness in May. But Rich Strike will still have a chance at making history on Saturday.

Barber Road walks off the track after a morning workout prior to the 154th running of the Belmont Stakes at Belmont Park on June 9, 2022, in Elmont, New York.
(Sarah Stier/Getty Images)

If Rich Strike wins The Belmont Stakes, the horse will become the first since Thunder Gulch in 1995 to win the Kentucky Derby and the Belmont but not the Preakness.

The owner of Rich Strike, Rick Dawson, released a statement prior to the Preakness outlining the strategy for his horse.

“Our original plan for Rich Strike was contingent on the KY Derby, should we not run in the Derby we would point toward the Preakness, should we run in the Derby, subject to the race outcome & the condition of our horse, we would give him more recovery time & rest and run in the Belmont, or another race and stay on course to run with 5 or 6 weeks rest between races,” Dawson’s statement read.

Rich Strike and his exercise rider train on the track during a morning workout prior to the 154th running of the Belmont Stakes at Belmont Park on June 7, 2022, in Elmont, New York.
(Sarah Stier/Getty Images)

“Obviously, with our tremendous effort & win in the Derby it’s very, very tempting to alter course & run in the Preakness at Pimlico, which would be a great honor for all our group, however, after much discussion & consideration with my trainer, Eric Reed & a few others, we are going to stay with our plan of what’s best for Ritchie is what’s best for our group, and pass on running in the Preakness, and point toward the Belmont in approximately 5 weeks.”

The 80-1 long shot at the Kentucky Derby is still not favored to win at Belmont, with that honor going to We the People at 2-1.

While Preakness winner Early Voting will not be racing at Belmont Park on Saturday, there will be eight horses competing in the 154th running of the Belmont Stakes.

Here’s what to know about the event.

Who is racing and what are the odds?

Skippylongstocking and his exercise rider train on the track during a morning workout prior to the 154th running of the Belmont Stakes at Belmont Park on June 7, 2022, in Elmont, New York.
(Sarah Stier/Getty Images)