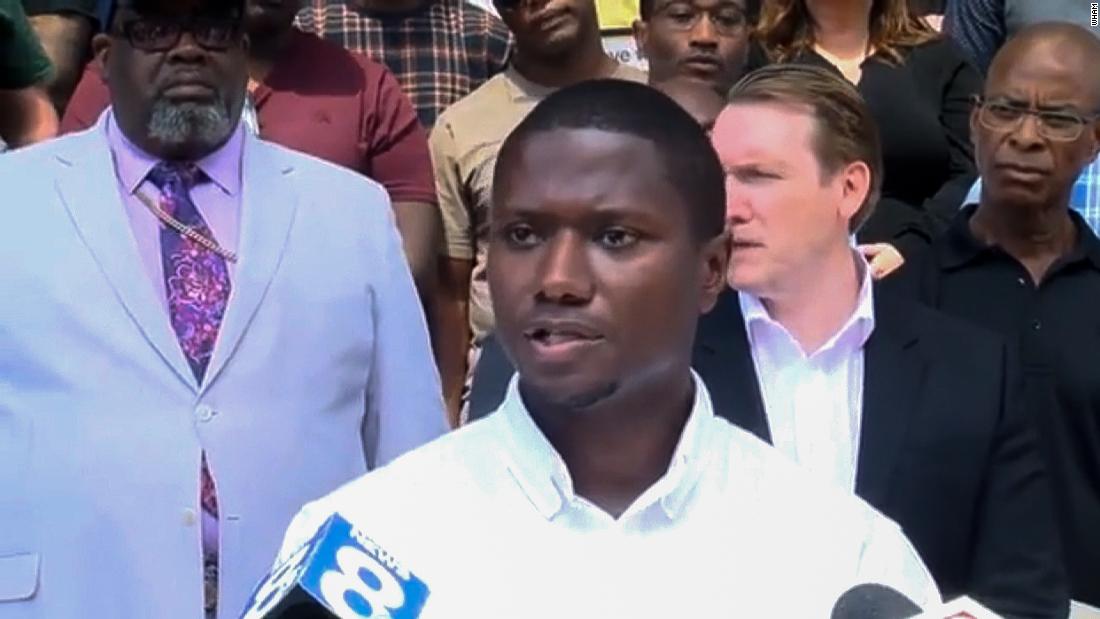 Jerrod Jones, a 14-year veteran of the Rochester Fire Department, filed a notice of claim August 11 saying the private party occurred in a Rochester home in one of the city’s wealthiest communities. The notice of claim is an administrative filing required in New York before Jones may file a lawsuit in court against the city and its fire department.

Jones said he was led to believe he was attending a community event and was immediately uneasy as he arrived at the party where he noticed a large cut-out of former President Donald Trump as well as two large Juneteenth flags with buckets of Kentucky Fried Chicken “prominently displayed,” according to the filing.

When Jones expressed concern that it was a private party, the filing noted, his captain, Jeffrey Krywy, assured him and two other on-duty colleagues that it was an outdoor event and in their district. Jones also said the commanding officer wanted him and his colleagues in uniform.

In a press conference last week with his attorney, Jones said while he wishes he didn’t have to publicly speak against the fire department he loves, he felt like he had to for things to change.

“It means a lot to me when I put that uniform on and I’ve always wanted to represent my city in the correct manner, in a decent manner, honorable manner,” Jones said. “And what I had to experience a month ago it cut me very deeply.”

According to the notice of claim, Jones said he reported the incident the day after the party, but was assigned to work with Krywy on subsequent days, leaving him “in disbelief.” The notice of claim also said Jones has subsequently taken a leave of absence and is “suffering emotional distress and fear of retaliation” with pressure from several firefighters “including elected officials” to remain silent. The notice alleges a claim under New York’s Human Rights Law, alleging Jones was discriminated against and subjected to a hostile work environment based on his race.

Rochester Mayor Malik Evans issued a statement Tuesday saying an internal investigation into the allegations is complete and that Krywy decided to retire prior to the beginning of termination proceedings against him.

CNN has been unable to reach Krywy or his attorney for comment. He was not named as a defendant in the claim.

In response to Evans’s statement, Jones’s attorney Nate McMurray in a tweet Tuesday said it’s “troubling” that the mayor’s statement only came after Jones went public with the incident.
“There has not been an independent review of how this happened and who was involved. There are no concrete changes to guarantee it can never happen again. And my client remains at risk, subject to threats and a hostile workplace, just years away from his own well-earned pension,” McMurray said in another tweet.

The claim also stated Jones saw pictures of various local Democratic lawmakers on stakes around the backyard. One of the other firefighters named in the claim allegedly expressed regret at attending the party and told Jones the group shouldn’t be there. According to the notice of claim, firefighters are not allowed to attend partisan political events based on department rules.

The notice of claim alleges Krywy engaged fully with the party, its hosts and guests, and ordered the three firefighters to not take pictures.

The Rochester firefighter’s union tweeted a statement last week before the city’s internal investigation was completed Friday saying they find the allegations regarding the party to be “extremely disturbing.”

“Our union has zero tolerance for racist attitudes and behaviors, either on or off our jobs,” the statement said. ” We will await the findings and details of a full investigation of this matter, before making further comments or taking responsive actions.”

In last week’s press conference, Jones said he’s spoke up because he felt obligated to do the right thing.