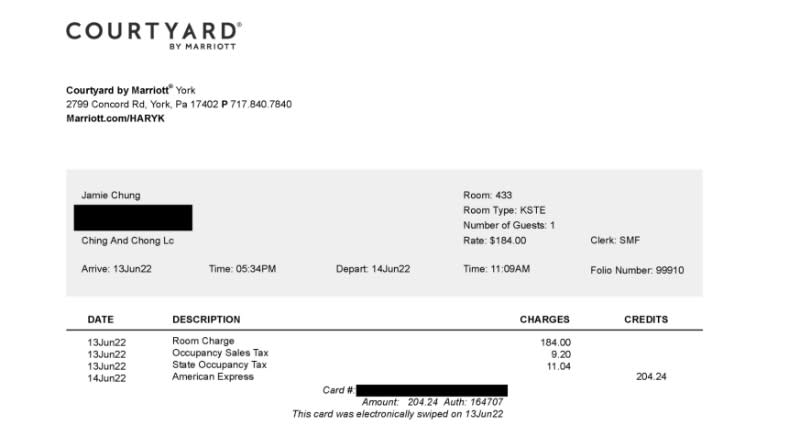 A Brooklyn couple who checked into a Marriott Hotel in Pennsylvania received an invoice with an anti-Asian slur.

Jamie Chung, 37, and his girlfriend Tierney Oberhammer, 35, stayed the night at the Courtyard by Marriott on Concord Road in the city of York on June 13. Following their stay, they received an invoice through email with an anti-Asian racial slur typewritten on their bill.

“My girlfriend and I were checking out of the Marriott, and the front desk clerk said my last name, ‘Chung,’ with a strange emphasis, like she was mocking an Asian accent. We clocked it, but decided not to make an issue of it,” Chung tells NextShark. “We got back to New York, opened the invoice, and saw that they’d written the racial slur ‘Ching and Chong’ on it. Pretty bold and brazen.”

The couple informed Marriott executives about the incident. While their contact apologized and offered hotel points, they were unable or unwilling to answer questions regarding the details of the sensitivity training they claimed to have implemented, according to Chung.

More from NextShark: Riot Games investigating founder of one of the world’s most valuable esports teams for bullying, abuse

“I want to reiterate that Marriott International stands against racism. We believe that all people deserve to be treated with dignity and respected for their humanity and the distinct qualities that make them unique,” Marriott International Chief Executive Officer Tony Capuano wrote in a statement regarding Asian hate released in March 2021. “We do this in a number of ways, through internal resources available to our associates that promote respect and kindness, and training designed to inspire a sense of community and combat unconscious bias.”

Marriott has not released a statement regarding the racist incident.

“The response that we received from Marriott executives was disappointing,” the couple said. “They tried to shift blame and give excuses rather than take responsibility for what happened on their watch, under their roof. They have tried to distance themselves from the incident by pointing out that it occurred at a Marriott franchise.”

More from NextShark: Friends Who Met on ‘Subtle Asian Mental Health’ Want to Make it Easier For You to Talk to Parents About Mental Health

“They suggested a clerical accident, a typo, led their front desk clerk to enter a racial slur into the invoice. Their response did not give us the impression that they take this incident seriously,” they added.

Chung, who is of Chinese and Jewish descent, says that the front desk clerk was also a person of color. Although Chung and Oberhammer were willing to forgive the employee, the alleged hypocrisy of Marriott prompted them to share their story. They requested that the clerk not be fired for the racist incident. Instead, they wish for the international hotel company to take accountability and understand the culture of racism they uphold when a racist situation is taken lightly.

“Marriott is a big, powerful company that employs and provides services to a lot of people. What they do and say matters. They need to do better,” the couple wrote in a statement to NextShark. “This is about company culture, training, accountability, basic human decency, and the hypocrisy of Marriott’s inadequate response to racism within their organization, especially given their stated company values.”

“There is so much nuance and complexity to this story, including historical context, that we worry will be overlooked. It is not lost on us that this racial slur was delivered by a fellow POC,” they added. “The last thing we want is for this to exacerbate tension between minority communities, who have been pitted against one another in this country. Racism affects everyone, and we stand against it.”