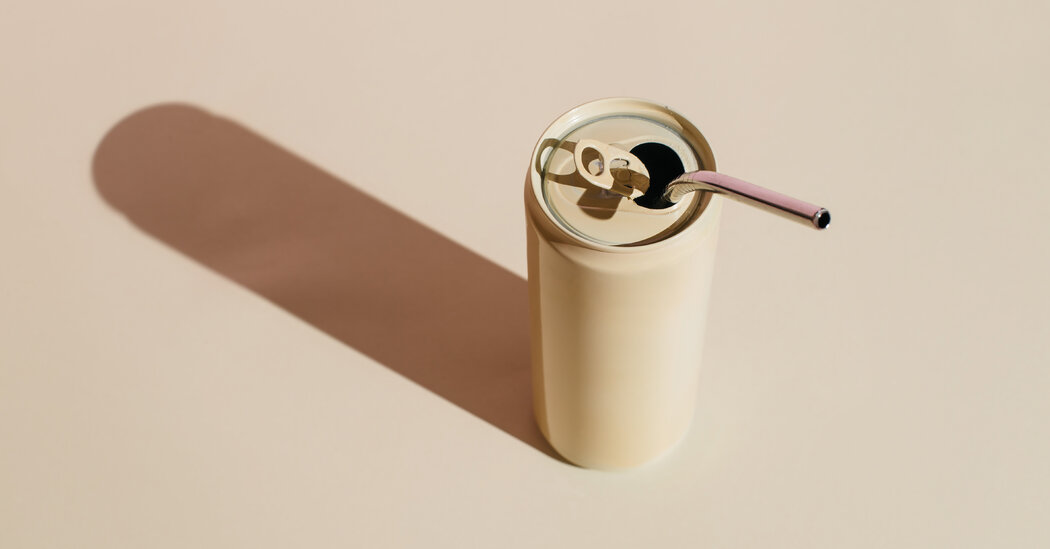 Wander down the beverage aisle of your local supermarket or bodega, and you might spot some dreamy-looking cans, in sherbet and pastel hues, promising to help you do something that seems in short supply of late: Relax. “Drink your meditation,” urges the label of one fruity, herbal tonic; “transcend stress, and open a portal to peace,” advertises another. One hemp-infused sparkling water claims it can help you feel “cool, calm, collected.”

Stress-reducing beverages — like sparkling waters, tonics and teas suffused with trendy ingredients like CBD, hemp, amino acids and more — have been growing in popularity in recent years. The company that makes Recess, a “calming” sparkling water with hemp and botanicals, said its monthly revenues increased by 600 percent between March 2020 and September 2021. Another brand called Moment, which sells a “stress-reducing” drink with amino acids and herbs, said its sales rose by 1,775 percent between September 2020 and September 2021.

Experts say that these drinks probably won’t hurt you, but the evidence on how, or if, they can help you is murky. Here’s the science behind the eye-catching advertising and bold claims.

What’s in these drinks?

The labels and marketing materials of many of these stress-relieving drinks point to an alphabet soup of wellness ingredients and buzzwords. Some contain small doses of CBD, or cannabidiol, a compound found in marijuana and hemp that doesn’t get you high but is often taken to relieve ailments like anxiety, insomnia and pain.

Some brands also infuse their drinks with “adaptogens” — or “super-herbs,” as some people call them — which are a group of medicinal herbs, mushrooms and roots that include ashwagandha, lemon balm and ginseng. Such plant-based substances have been used in Chinese, Indian and Western herbal medicine to treat stress, said Dr. Yufang Lin, a doctor at the Center for Integrative Medicine at Amherst Family Health Center in Lorain, Ohio.

Some stress-relief beverage companies also advertise that they contain amino acids like L-theanine, L-serine and L-tryptophan, which they purport can reduce stress and create a sense of calm.

What does the evidence say?

The research on how well these ingredients work to promote a sense of calm and relaxation is limited at best. Some small studies in humans and animals have hinted that supplemental CBD might help with anxiety and insomnia. One 2011 study of 24 college students with social anxiety, for instance, concluded that those who took a single, 600-milligram dose of CBD before a public-speaking exercise felt more comfortable and less anxious than those who took a placebo. Another study, published in 2019, found that of 72 adults with anxiety, poor sleep or both, 57 reported improved anxiety and 48 reported improved sleep after one month of taking a daily CBD capsule. A 2015 review of 49 studies also showed promising evidence, particularly in animals, that CBD could improve certain anxiety disorders, including those linked to post-traumatic stress and obsessive compulsive disorders. Other limited studies have also suggested that CBD may help people with pain and addiction.

Even more limited is the research that looked into using adaptogens or amino acids for stress. Those studies tend to be small and inconclusive, Dr. Lin said. “The question here is: What is the optimal dose?” she said. “And nobody knows that. There’s just not enough study.”

Will these drinks help calm you down?

They might, experts say, but even if the active ingredients do have a calming effect, they are probably in such small doses that you won’t feel much.

A quick peek at the nutrition labels of a dozen popular de-stressing drinks reveals just five to 25 milligrams of CBD per container. (According to the Food and Drug Administration, “it is currently illegal to market CBD by adding it to a food or labeling it as a dietary supplement.” But some states allow products containing CBD to be sold. New York, for example, permits up to 25 milligrams of cannabidiol per product.)

“If you’re only taking in five milligrams, you’re getting a homeopathic dose. You wouldn’t notice anything,” said Jason Busse, associate director of the Michael G. DeGroote Centre for Medicinal Cannabis Research in Ontario. Research studies that have demonstrated the benefits of using CBD tend to use much larger doses, in contrast, typically between 400 and 600 milligrams, he said. And given that just a tiny fraction of the CBD will end up reaching your bloodstream, he continued, most drinks — even those at the higher end with 25 milligrams — probably won’t have an effect on your stress levels.

The way these drinks make you feel will also depend on how they’re formulated, said Dr. Pieter Cohen, an associate professor of medicine at the Cambridge Health Alliance who studies supplements. “You can put an ingredient like ashwagandha on a label, but you can prepare the plant any which way,” he said.

Dr. Lin agreed. When adaptogens are used traditionally for stress relief, she said, they are typically taken in precise doses. “When you add some of this in a wellness drink, that means nothing to me because I don’t know the dose, I don’t know how it’s made, I don’t know the quality,” she said.

Representatives from Recess, Moment and Kin Euphorics, three popular drink brands that claim to help you relax, emphasized that their beverages aim to induce a sense of calm, not necessarily to treat anxiety disorders. And while no clinical trials have been done on these specific drinks, they said, their customers have reported lifted moods and cleared minds.

Perhaps more likely, said Marion Nestle, a professor of nutrition, food studies and public health at New York University, those people who notice a benefit may actually be experiencing a placebo effect. She compared the rise of wellness drinks to the booming supplement industry; the power of suggestion is so strong, she said, that we want to believe we’re consuming a cure, even when the evidence for it is lacking.

Will these drinks harm my health?

The F.D.A. has expressed concern about the proliferation of CBD products on the market, most of which are unapproved, and has noted their potential safety risks. But experts said that drinks containing CBD and the other active ingredients would probably not have a negative impact on your health. “At the doses that we’re talking about, these are relatively benign molecules,” said Ryan Vandrey, a professor of psychiatry and behavioral sciences at Johns Hopkins Medicine who researches cannabis. “They’re not really going to hurt you, but who knows if they’re going to help you either? My sense is these things are mostly marketing and gimmickry.”

Wellness drinks also tend to be low in sugar and added sweeteners, Dr. Nestle said, and so are not likely to be detrimental from a nutritional perspective. “If people try one of these and feel better, good for them,” she said. “It’s a very stressful time, and I think everyone’s looking for something, anything, that might help.”