Cannupa Hanska Luger Is Turning the Tables on the Art World 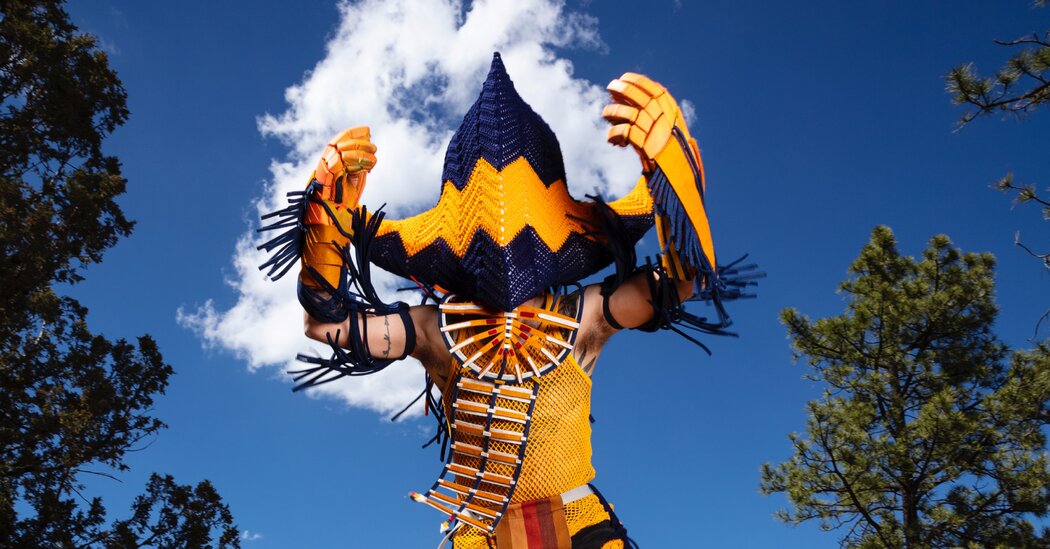 Several weeks later, on a bright, frigid January afternoon, I met the artist at his home in the snow-flecked hills above Santa Fe. Luger wore bluejeans, a hooded sweatshirt and a beanie. While playing with his dogs outside, we talked about various ceramic pieces he’d been working on: a head with a sword plunged into its mouth; an oversize bison skull; a stoic Indigenous face mask. “They’re not art; they are what’s left over from art,” he told me. Luger’s art is process-oriented, not object-oriented, and what drives him is not the thing he’s making but the thrill of making it. “All of these things are just byproducts of something incredibly special. Ceramic chips and paint fades, but creation is perfect.”

Luger calls clay a “generous” material. Recently, he created 72 ceramic bullets, each cast from one of several molds, then fired in his kiln and painted in motifs that reimagined them as purely aesthetic objects. One design featured cobalt-colored flowers that brought to mind Russian teacups, while others drew inspiration from Crayola crayons and military camouflage patterns. Another was given a gold-leaf-and-porcelain treatment. The installation, called “Rounds,” grew out of Luger’s continuing fascination with symbols of colonial violence and his interest in imagining them as aesthetic trophies — like an Indigenous anthropologist of white-settler culture, he unbinds the object from its function and finds a strange beauty.

When Luger was 4, his parents divorced, and the reservation eventually became a place he only visited. He and his four siblings went to live with their mother, the artist Kathy Whitman-Elk Woman, who moved with them to the Black Hills for a time before settling in Santa Fe in order to make a better living. (“There’s no economy for Native art in North Dakota,” Luger said.) It was a transient childhood, with stints in New Mexico and Arizona, but always tethered to the Santa Fe Indian Market, where his mother sold her beadwork, paintings and sculptures at a booth each August.

Santa Fe has been the center of the Native art world since Sept. 4, 1922, when the Museum of New Mexico’s director, Edgar Lee Hewett, inaugurated what was then called the Southwest Indian Fair and Industrial Arts and Crafts Exhibition. In a welcome speech, Hewett, a white archaeologist and anthropologist from Illinois, professed his hopes that the market would help preserve what he sometimes called the “ancestral purity” of Native arts and crafts. Appointing himself an arbiter of Native authenticity, Hewett encouraged Pueblo Indians to abandon any pottery traditions arising from contact with the Spanish — believing they had tainted the “racial purity” of the art — while failing to recognize his own corrupting influence. One draw in the market’s first year was a style of black-on-black pottery developed by people of the San Ildefonso Pueblo solely for sale to white buyers; Hewitt also offered free admission to Indians who came dressed in traditional clothing.

Raising Luger around the market, Elk Woman correctly sensed that her son resented its trappings. Being successful there meant endless haggling, networking and the kind of salesmanship that bordered on theatricality. When white customers made insulting offers on Elk Woman’s work, told off-color jokes or put unreasonable demands on her time, she had no choice but to indulge them with good humor. She was a single mom with five kids to care for, and with no source of income besides her art, she relied on the Indian Market. Playing that game well could be stifling, though, and she’s sure her son saw that. “I think it left a bad taste in his mouth,” she told me. Luger said observing his mother from the periphery of that economy also sharpened his instincts for recognizing who was looking to support Native artists and who was looking to rob them.