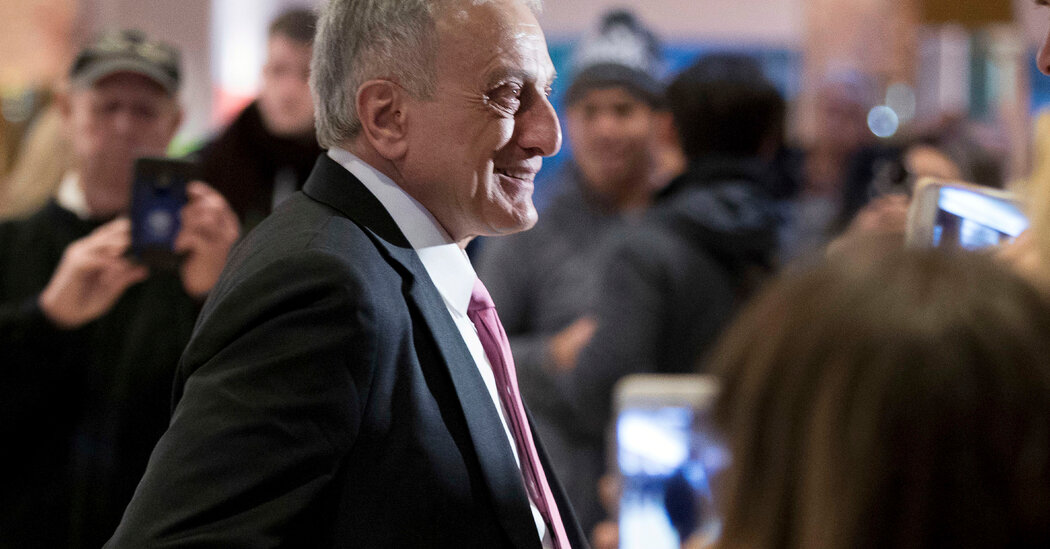 Carl P. Paladino, a Republican running for a House seat in Western New York, praised Adolf Hitler last year for inspiring his followers, describing the fascist dictator as “the kind of leader we need today.”

Mr. Paladino did not specifically condone Hitler’s actions in his remarks, which he made in a 2021 radio interview that was unearthed on Thursday. But he said he was impressed by how the German leader and head of the Nazi Party “aroused the crowd” in his speeches and suggested that Republicans in New York and Washington ought to emulate his approach.

“He would get up there screaming these epithets and these people were just, they were hypnotized by him,” he said in the interview, resurfaced by the left-leaning watchdog group Media Matters. “I guess, I guess that’s the kind of leader we need today. We need somebody inspirational. We need somebody that is a doer.”

“Our Republicans are sound asleep,” he added, referring to party officials as captive to “RINOism,” a derogatory acronym meaning Republicans in name only.

The remarks, for which he apologized on Thursday, were striking even by the incendiary standards of Mr. Paladino, who has previously said that children should not be “brainwashed” into thinking that being gay was acceptable and suggested that Michelle Obama, the former first lady, should be “let loose in the outback of Zimbabwe.”

They could cause major headaches for G.O.P. leaders, particularly Representative Elise Stefanik of New York, the No. 3 House Republican, who has championed his fledgling candidacy.

“Carl is a job creator and conservative outsider who will be a tireless fighter for the people of New York in our fight to put America First to save the country,” she recently wrote on Twitter.

She also invited him to a fund-raiser on Monday at former President Donald J. Trump’s Westchester County golf course, where the two men were photographed together.

The chairman of the New York Democratic Party singled out Ms. Stefanik on Thursday as he called on Republican leaders to condemn Mr. Paladino for “blatant antisemitism.”

“How has the Republican Party stooped so low to support a man who has gone on record idolizing a monster that senselessly killed millions?” said the chairman, Jay Jacobs.

In a statement on Thursday, a spokesman for Ms. Stefanik said she had “one of the strongest records in the U.S. Congress condemning antisemitism” and had pushed bipartisan Holocaust education legislation. But the spokesman did not indicate whether the congresswoman maintained her support for Mr. Paladino.

A Buffalo-based developer who was the Republicans’ 2010 nominee for governor of New York, Mr. Paladino, 75, entered the House race just last Friday after Representative Chris Jacobs said he would not seek re-election. Mr. Jacobs was facing an intense backlash from party leaders angry over his support for an assault weapons ban and other gun safety measures, which he expressed after recent mass shootings.

Mr. Paladino will face a formidable primary challenge from Nicholas A. Langworthy, the chairman of the state Republican Party, who announced his candidacy on Thursday as the developer’s comments reverberated through the 23rd Congressional District.

His entrance set the stage for the kind of explosive primary that New York Republicans had hoped to avoid this year as they seek to retake the House majority in Washington. While the 23rd District is likely to remain in Republican hands, a primary battle could divert resources away from other swing seats the G.O.P. believes it can flip.

But in an interview, Mr. Langworthy argued that allowing Mr. Paladino, a one-time ally, to proceed to a general election would be worse.

“That’s exactly why I am running for Congress, because I provide a candidacy free of distraction,” he said, adding: “We can’t have a circus sideshow on the ticket in Buffalo in the fall that would hurt our statewide prospects.”

He said he would remain party chairman during his campaign.

Mr. Paladino’s comments about Hitler were not even the first time this week that he has drawn condemnation and been forced to apologize.

In a Facebook post and email blast sent last Wednesday, just two days before he said he would run for the House, Mr. Paladino promoted an essay by a Rochester man casting doubt on the official accounts of recent mass shootings in Buffalo and Uvalde, Texas, where he asserted that the purported gunman “was receiving hypnosis training.”

“In almost every mass shooting including the most recent horrific Buffalo Tops Market & the Texas school shootings, there are strange occurrences that are never fully explained,” the man wrote, including conspiratorial references to the suicide of Jeffrey Epstein and the assassinations of John F. Kennedy and Robert F. Kennedy.

Media Matters was also first to report on Mr. Paladino’s post, which was later removed.

In an emailed statement on Thursday, Mr. Paladino said that his invocation of Hitler had been a “serious mistake and rightfully upsets people,” but he blamed the news media for taking his remarks out of context.

“Any implication that I support Hitler or any of the sick and disgusting actions of the Nazi regime is a new low for the media,” he wrote, adding that he would stay in the race against Mr. Langworthy.

Mr. Paladino initially denied sharing the essay on gun control, claiming he did not know how to post on Facebook, but later admitted doing so to The Buffalo News, adding that he did not agree with all the “conspiracy theories” it cited.