Celtics’ Jayson Tatum on becoming young father: ‘I think we need more role models like that’ 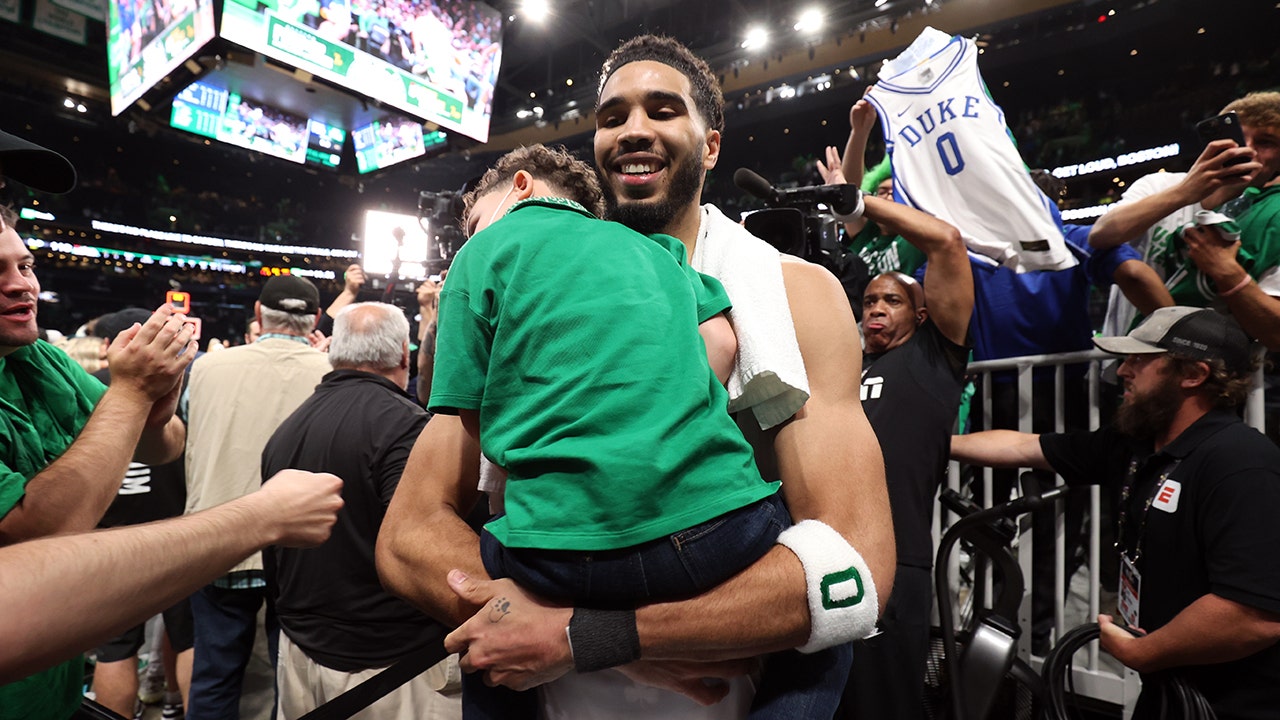 Boston Celtics star Jayson Tatum may be among the top NBA stars in the sport, but his 4-year-old son usually steals the show from him once the game is over.

Tatum on Tuesday, ahead of the Celtics’ Game 3 victory over the Golden State Warriors in the NBA Finals, opened up about what it meant to him to become a father at such a young age and when his own career was about to skyrocket.

Deuce Tatum plays with a ball before the NBA Finals game between the Celtics and the Golden State Warriors at TD Garden on June 8, 2022, in Boston.
(Maddie Meyer/Getty Images)

“I think 2017 when I got drafted, I didn’t have Deuce, but he was born in 2017 so that was big, that was the biggest year of my life, right? Starting this new chapter in my career, I just had a child,” Tatum told reporters. “My mindset was not to sacrifice either, that I was going to be the best father as I could as well as the best basketball player. There was no guideline or there was no exact way to do it. It was all about what was natural.

Jayson Tatum of the Celtics carries his son, Deuce, after the NBA Finals game on June 8, 2022, in Boston.
(Nathaniel S. Butler/NBAE via Getty Images)

“I just do what’s natural. I’m around him every day. I think being able to go through this journey together, because I was 19 when I got drafted, it’s kind of like we’re growing up together. As he’s gotten older, I’m going through my career, sharing these moments, experiencing this together as we grow up. I think it’s the coolest part for me.”

CELTICS’ JAYSON TATUM FELT SNUBBED BY LAKERS IN 2017 NBA DRAFT: ‘THEY DIDN’T WANT ANYTHING TO DO WITH ME’

Tatum and his son are always seen together on the court or during their free time when the Celtics guard is away from basketball.

Jayson Tatum of the Boston Celtics celebrates with son Deuce and singer Nelly after the 116-100 win against the Golden State Warriors on June 8, 2022, in Boston.
(Maddie Meyer/Getty Images)

“I think we need more role models like that. Just to have more male fathers be present and things like that, show that you can do both, regardless of whenever you work, whatever your profession is,” he said.

After Wednesday night’s win, Deuce was greeted by rapper Nelly after the game. The two shared a sweet fist bump.