Chess in the park in NYC 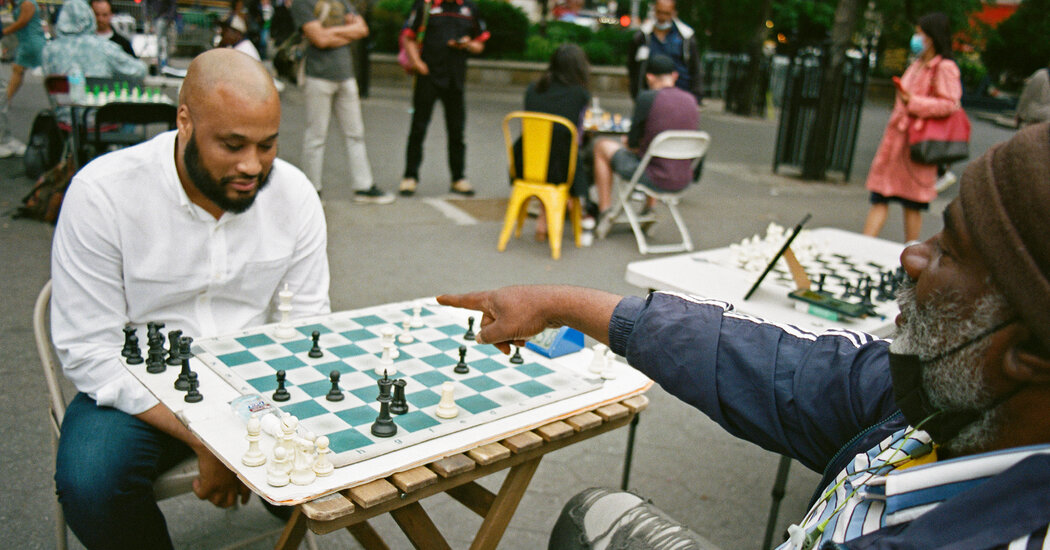 Chess can be a nearly silent game when two people are in the zone. Green felt quietly brushing against plastic or stone; perhaps a clock clicking back and forth as the time dwindles down.

But around New York City, chess often draws a rowdier audience. Trash-talking takes place above the sounds of funk, soul and rap songs that blast from portable speakers.

On Monday night, as a song ambled on about hustlers who were “ready to play from night ’til day cause all of them wanted to win,” the chess players of Union Square were talking commuters and tourists into playing a game or five.

“Want to play some chess?” a man who’s known in that corner as “Johnny the loser” asked anyone who lingered there for a second too long. “Ladies can play chess, too!”

Another man, Alfred, did a lap several minutes later as a Roy Ayers song floated through the air, offering to teach people how to play. How long has he been playing, you may ask?

“Longer than you’ve been alive,” he said as he sized up me and a photographer, both in our twenties. “Combined.”

John Hill, 61, sat at his table in a track jacket and a beanie, bantering back and forth with a man named Adam.

“Why are you trying to fight me?” Mr. Hill asked his opponent as pieces got picked off the board.

“Why are you trying to fight?” Adam replied.

Nearby, as Michael Jackson and Marvin Gaye sang about grooving and being in love, “Russian Paul,” 58, sat at his table decimating one opponent after another.

“First I think about the money,” he said. “But because I have skills, I don’t have to worry about losing money.”

Paul said that he stayed with a friend who lives nearby, and he’d sometimes stop by the Trader Joe’s on 14th Street to grab a lime-flavored sparkling water to mix with some vodka. Though he plays chess in the park nearly every day, how long he’s there and how much he makes fluctuates.

Once darkness had settled over Union Square, chess and backgammon players began to depart. After the music stopped and only Paul remained, he walked several blocks away to lock up his table and folding chairs.

Closer to midnight in Washington Square Park, the sounds of Thelonious Monk were floating from the stone chess tables in the southwest corner.

Pete Quainoo, 34, nervously shuffled his red Puma slides under the table while a man who called himself “Eric from the park” calculated his next move.

“I got to give him a rook!” Eric said, before affirming to himself, “No, it’s not checkmate — I got this.

“You’re going to take the rook, and then I’m going to be out of all this trap,” Eric continued, narrating how he hoped the rest of the game would play out. “How are you going to take it? With the queen? Thank you. Thank you very much. It’s the nicest thing that anyone’s ever done for me. Better be careful. You understand me?”

Soon enough Eric won, but Mr. Quainoo kept his eyes fixed on the board, asking to replay the last moves so he could figure out where he went wrong.

Several blocks away on Thompson Street, players at the Chess Forum also stayed late into the night to battle over the sounds of WQXR, New York’s classical music radio station.

“Classical music is playing because it sets the mood to play,” said Sebastian Montalvo, 22, who posts videos of many of his games around the city on his TikTok. “If you were to play like, dubstep here, it’d be really hard to focus.”

Mr. Montalvo, who started playing chess at 18, said that he became “obsessed” with the game after a friend brought a chess board to school.

“He completely destroyed me, I’ve never been so embarrassed,” he said. “I’d never lost like that.”

Soon he got into the rhythm of playing games at Union Square, Washington Square, Bryant Park and the Chess Forum.

“I’ve never been as obsessed with anything in my life other than chess,” Mr. Montalvo said. “And you meet so many people. The people you meet, you never would have thought of.”

Jim Ferraiuolo, 71, was playing against Jason Puello, 27, on one side of the narrow room while Luke Scarpa, 30, and Michael Bloom were playing each other on the other side.

“These guys are my cronies,” Mr. Ferraiuolo said as he gestured to Mr. Scarpa and Mr. Bloom. “We’ve been playing together for years.”

Mr. Ferraiuolo said he learned to play chess while on the road as a touring musician and started coming to the Chess Forum about 20 years ago. He said he’s also a member at the nearby Marshall Chess Club on 10th Street.

Mr. Scarpa said that the space, which feels like someone’s endearingly cramped living room, is a great place to find camaraderie, as well as a few celebrities.

“You know J. Cole? I saw him here once, I played with him,” Mr. Scarpa said, referring to the rapper who famously went platinum with no features. “He wanted to play with a white dude.”

Mr. Scarpa later discovered that the other man was another rapper who goes by Logic.

“Really nice, very into the game,” Mr. Scarpa said before adding: “That guy did not know how to play.”

A few tables over, Jacqueline Black, 29, and Calil Arguedas-Russell, 23, were playing chess and drinking a bottle of wine.

Mx. Arguedas-Russell, who uses they/he pronouns, said that they play chess every day.

“I play chess with a person over the board four days a week at least,” they said. “And then I play online every day, like multiple times.”

They said that sometimes they’ll play with the Bushwick Chess Club at Nook, but the Chess Forum is where Mx. Arguedas-Russell usually ends up.

“Even on my days off I’ll come play,” Mx. Arguedas-Russell said, adding that they spent Christmas Day at the Chess Forum. “The chess-obsessed don’t care.”