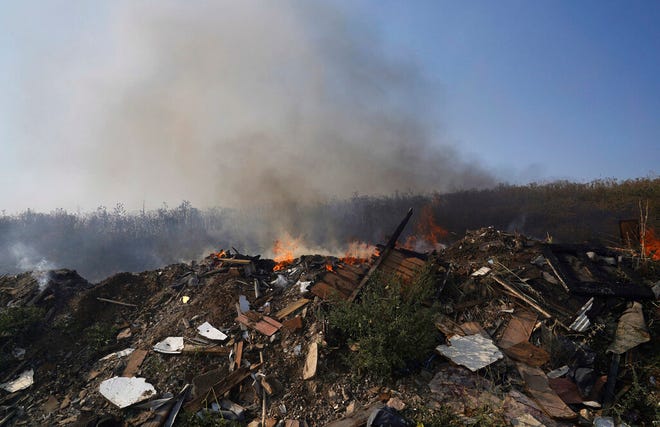 After days of record-breaking heat, forecasters say relief is coming to the United Kingdom as temperatures dip and thunderstorms approach. Still, England faced transportation disruptions Wednesday as the country recovered from heat-fueled fires.

Heavy showers with a risk of thunderstorms were forecast for parts of England on Wednesday, with largely dry but cooler weather expected elsewhere in the U.K., according to the Meteorological Office, the U.K.’s weather office.

“Thundery showers” may cause transportation disruptions Wednesday in central and eastern England, Met Office meteorologist Alex Deakin said in a video forecast as the agency issued a Yellow warning for thunderstorms in the area.

With the rain and cloudier weather cooling the region, Deakin said U.K. temperatures will still be above average, peaking at 86 degrees Fahrenheit, but “nowhere near as high as yesterday.” Tuesday, the U.K. crushed its record for highest temperature with a high of 40.3 Celsius provisionally recorded.

HEAT GUIDE:From the heat index to a heat dome to an excessive heat warning

The London Fire Brigade received 2,600 calls Tuesday and, at one point, battled 12 fires at once, making the day the busiest since World War II, London Mayor Sadiq Khan said. At least 41 properties were destroyed, and 16 firefighters were treated for smoke inhalation and other injuries.

The main train line from London to Edinburgh remained closed for part of Wednesday after a fire caused significant damage to signaling equipment, according to the London North Eastern Railway. There were also reports of damage to tracks, signaling equipment and overhead lines across U.K. rail networks, the railway said.

HOW TO STAY COOL:As heat wave impacts millions, here’s how to stay safe

Even as temperatures cool Wednesday, Khan told the BBC the threat of fire remains high after scorching weather in the days before dried out grasslands surrounding London.

“Once it catches fire it spreads incredibly fast, like wildfires like you see in movies or in fires in California or in parts of France…,” Khan told the BBC.