Could shark sightings in the Midwest become more common? 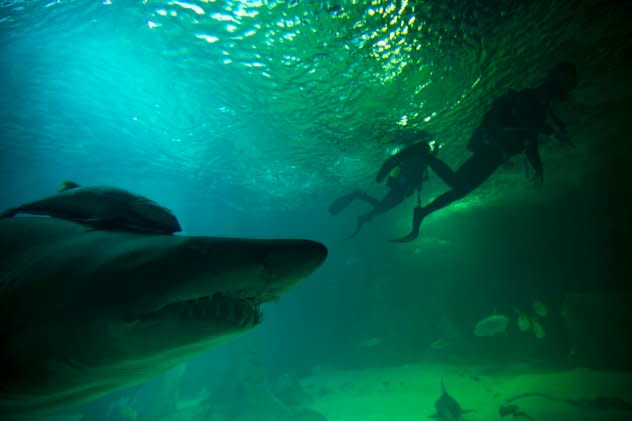 Sharks are, for the most part, ocean animals. Tens of millions of people living in the landlocked Midwest may have never even seen one in person. However, there are some sharks, like the bull shark, that are able to thrive in freshwater, and they could be coming farther inland than ever before.

“[Bull sharks] are, depending on what study you read, usually in the top three in terms of [being] dangerous to humans, but they’re beautiful animals,” Kevin Feldheim, manager of the Pritzker Laboratory at the Field Museum of Natural History in Chicago, told AccuWeather National Weather Reporter Emmy Victor. He said there were two known sightings in the Mississippi River over the past century: one in Alton, Illinois, in 1937 and another in Missouri in 1995.

Bull sharks are found all over the world, according to the National Wildlife Federation. In the United States, they’re usually spotted roaming the shores of the East Coast and the Gulf of Mexico. The sharks enjoy the shallow coastal waters, which is why they can frequently encounter humans.

Feldheim said other sharks can tolerate low levels of salt in their environment, but they can’t swim through rivers or lakes like the bull shark. This — combined with summers that could warm by as much as 11 degrees Fahrenheit by the end of the century due to climate change — gives them the chance to swim out of the ocean and far into the north-central U.S.

GET THE FREE ACCUWEATHER APP

“We’re seeing them shift their ranges. Some of these cold-blooded species are being found further north, compared to where they used to be found,” said Mike Heithaus, a marine biologist at Florida International University. “Bull sharks and their use of freshwater could change as the climate does.”

Heithaus said that even though the sharks’ behaviors may change, the risk of someone seeing one so far from the ocean is very small.

“There are a lot of impediments that could prevent these sharks from getting upstream,” Heithaus said. “Their population isn’t what it used to be, so I wouldn’t worry about a bull shark swimming in waters in the Midwest.”

When researchers try to investigate the cause of these appearances, they often end up with even more questions.

“We don’t understand how physical barriers like dams and locks play a role, if at all, or what may motivate the sharks to move upstream,” Ryan Shell, paleontologist for the U.S. Forest Service, told The Alton Telegraph. “We can answer what, when, and where that sharks did this, but not how or why.”

While rare, the possibility of continued bull shark sightings in the Mississippi can’t be ruled out.

“It’s easy to dismiss these cases as one-off events,” Shell said. “But that ignores the interesting question of how these animals evaded detection and got so far upstream in the first place.”

Want next-level safety, ad-free? Unlock advanced, hyperlocal severe weather alerts when you subscribe to Premium+ on the AccuWeather app. AccuWeather Alerts™ are prompted by our expert meteorologists who monitor and analyze dangerous weather risks 24/7 to keep you and your family safer.