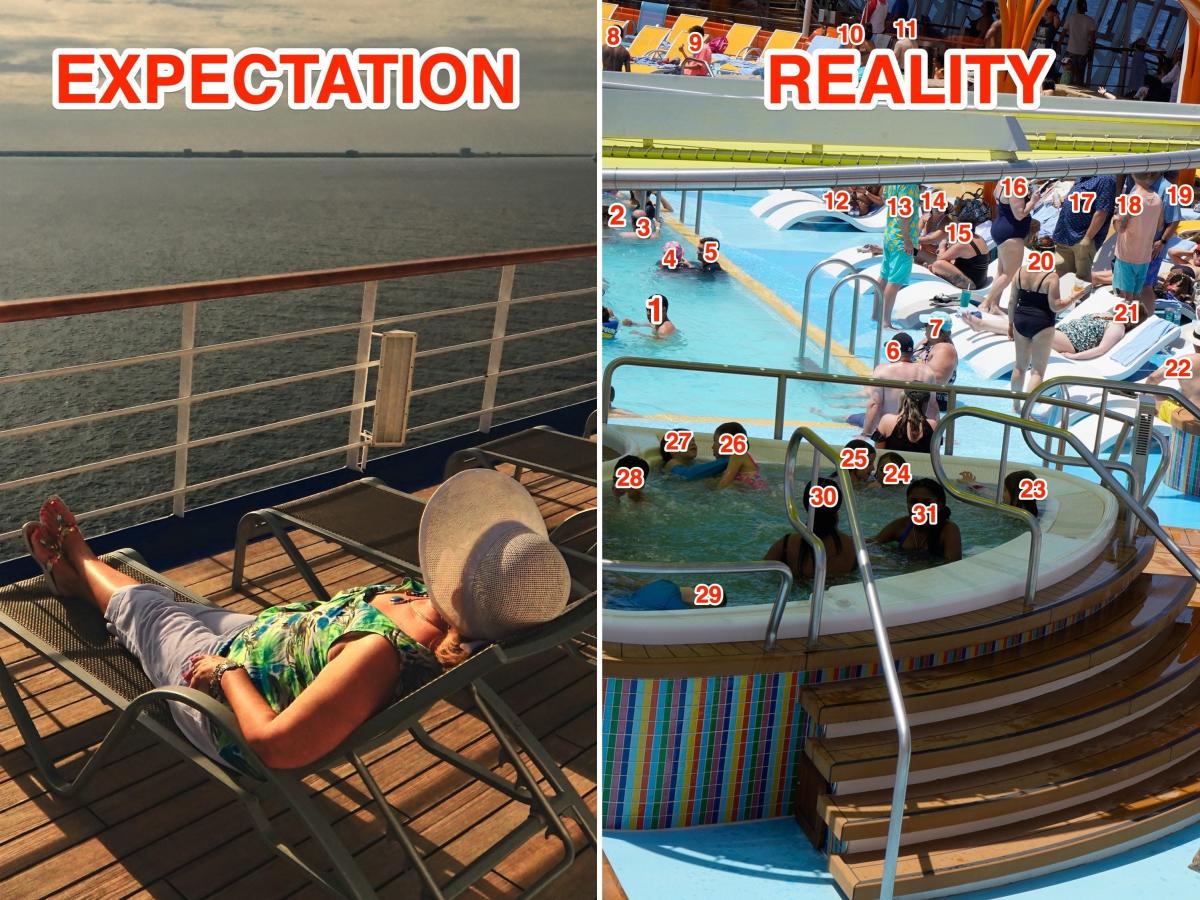 When I booked my first cruise aboard Royal Caribbean’s Wonder of the Seas, I expected breathtaking views of the world between relaxing swimming and sunbathing sessions.

But my experience cruising for the first time didn’t quite meet my expectations.

I sunbathed in a loud, crowded pool area when I was lucky enough to find a chair. I spent more time waiting in lines than I anticipated. And I saw much of the world from behind other people’s heads.

The disappointment started even before I was on the cruise. Since I don’t live nearby my cruise’s departure city, my trip began with a flight and a budget hotel room near my port in Fort Lauderdale.

When I arrived at my port city’s airport, I waited 45 minutes for a hotel shuttle to pick me up. This was the first of many crowded bus rides, and I wish I had called a cab.

The next day, I piled into a bus I felt was too hot with several other cruise guests and headed to the port.

I didn’t think the Fort Lauderdale Port was very picturesque, but I didn’t expect it to be.

There was a long line to get inside the cruise terminal, and I should have known by this point that I’d stand in many more lines during my cruise.

Inside the cruise terminal, there was another long line to get through security. While I waited, I chuckled to myself as I read signs that said, “Adventure begins here.”

Once aboard the ship, I was excited to view the ocean as we sailed away, but I was blocked by tall, thick glass and couldn’t find a place to stand.

Read more: 6 things that I wish I knew before setting foot on a cruise ship and that all first-time cruisers should keep in mind

The ship was so large that I got lost a few times during my stay. I found the maps on each floor to be helpful, though.

But as I explored the ship during my week-long stay, I was surprised to find that even the world’s largest cruise ship still felt overcrowded at times to me.

While people seemed to be enjoying themselves, many of the communal decks looked and felt to me just like a crowded mall.

Read more: I went to Starbucks on the world’s largest cruise ship and was surprised by how similar it was to stores on land — with one key difference

There were crowds and lines virtually everywhere I went, such as the buffet.

Read more: I spent a week eating on the world’s largest cruise ship. These are the 10 best dishes I had.

The pools were also usually busy.

A Royal Caribbean representative noted to Insider there are 19 pools, plunge pools, and whirlpools accessible to guests aboard Wonder of the Seas.

Read more: We compared every aspect of Carnival and Royal Caribbean cruise ships. Here’s what it’s like to sail on each.

And the pool decks were typically just as crowded.

Even though there were rules against saving chairs with towels, I still saw plenty of people doing it, so finding a spot to relax was stressful.

A Royal Caribbean representative told Insider that crew members might remove items from lounge chairs after 30 minutes. Still, they must also consider families and groups who may be in the pool or going to the restroom when enforcing rules like these and must use their best judgment.

If I waited until the evening to find a spot, I found it to be too windy and cold outside to enjoy the pool.

Cruise ships tend to be full of activities, but I found many of them had long lines.

At port stops, I waited in lines to go through security every time I left and returned to the ship. While I found this annoying, it made me feel safer, at least.

Read more: Will a cruise ship wait for me if I’m running late at a port stop? Here’s what a captain has to say.

The lines continued at each port, which was crowded with other tourists excited to begin their tours.

I often had to battle through crowds just to find signs for my particular excursions.

It was exciting to explore new places at each stop, though some of this exploration was from the window of another hot bus.

And when I was finally doing the cool thing I booked, like walking across a suspension bridge amid the treetops, my view was sometimes blocked once more by everyone else who booked the tour, too.

Read more: I went to Royal Caribbean’s private island in the Bahamas. It wasn’t for me, but I can see why cruise-goers love it.

According to a crew member I overheard, roughly 5,000 other people were aboard the ship, so I understand why the cruise felt so crowded. I think that if I were to book a less crowded cruise next time, I might enjoy it more.

Read more: I took my first Caribbean cruise and quickly learned that cruising is a lifestyle that’s not for me

Next time, I think I’ll book during the off-season to avoid crowds.

Although my first cruise didn’t meet my expectations, I still have hope that I could enjoy a cruise one day.