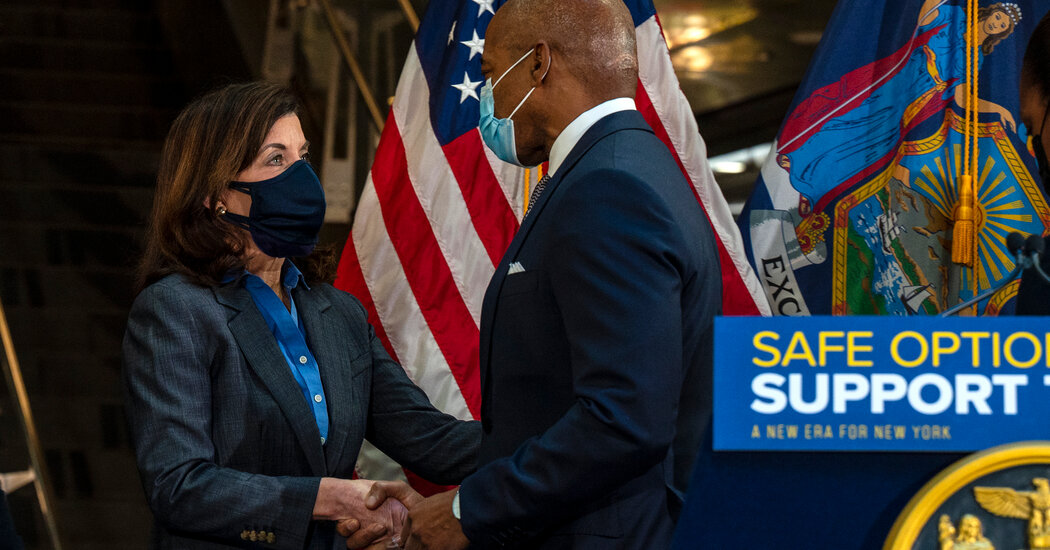 That will change on Wednesday, when the mayor plans to announce his support for Ms. Hochul at a rally in Manhattan — a significant last-minute endorsement that could help her firm up support among New York City voters in the June 28 Democratic primary.

In a statement shared with The New York Times, Mr. Adams said that he and the governor had quickly found “we shared the same priorities” of improving public safety and access to child care and housing, while making New York more affordable for working people.

“Since then, Governor Hochul has been a true partner, working on behalf of everyday New Yorkers — and it’s yielded real results,” he said. “I look forward to continuing that work for years to come with Governor Hochul and collaborating to lift this city and state to new heights.”

The endorsement will serve to tighten an unlikely political alliance between Mr. Adams and Ms. Hochul, two centrist Democrats from starkly different backgrounds who have nonetheless cast their lots together.

But how much of a difference the 11th-hour support will make with voters is likely to depend on whether Mr. Adams, an aggressive messenger, chooses to fully engage the political network that won him the mayoralty last year and actively campaign for Ms. Hochul in the waning stretch of the race.

Ms. Hochul, a Buffalo native who only took office last summer, has had no trouble winning over New York’s muscular political establishment, labor unions and donor class. That money and party support alone is likely to ensure her victory this month in the primary, in which polls show her leading fellow Democrats Representative Thomas R. Suozzi and Jumaane D. Williams, the New York City public advocate, by healthy margins.

But the governor has struggled to make inroads and generate enthusiasm among Black voters in Brooklyn and Queens and Latino voters in Brooklyn, Queens and the Bronx, who sent Mr. Adams to office and have long formed the base of winning Democratic coalitions statewide. Tepid support there could complicate her chances of winning a general election in November, when Republicans believe they have their best shot at claiming a statewide office in New York in more than a decade.

Republicans plan to try to tap into fears about crime that have grown in cities across the state since the onset of the coronavirus pandemic. As a former police officer who has made combating crime the hallmark of his administration so far, Mr. Adams could also prove an important voice defending the governor, if he chooses.

The governor said in a statement that she and Mr. Adams were “united” on fighting against gun violence, improving public safety and restarting the city’s sluggish economy.

“We are committed to building a new chapter in our state’s history that’s focused on teamwork, collaboration and progress over politics,” Ms. Hochul said.

Ms. Hochul clearly still has political work to do, though, including with some local leaders. She notably so far has not secured an endorsement from Letitia James, the New York attorney general, another politically popular Black leader from Brooklyn who briefly ran her own campaign for governor.

Mr. Adams himself waited to back Ms. Hochul until after the conclusion of the annual legislative session in Albany, a move that may have helped increase his leverage with the governor in negotiations over mayoral control of New York City schools, state support for New York City public housing and an expansion of the city’s speed cameras program.

He may still be seeking further leverage.

As recently as Monday, Mr. Adams asked Ms. Hochul to veto a bill passed in the final days of session imposing a two-year ban on new cryptocurrency mining permits. The governor has not publicly indicated whether she will sign or veto the bill, but she is also under intense pressure from environmental advocates to sign it.

But beneath the surface, there have been currents of discontent from the mayor, who believes that Ms. Hochul could have pushed harder for his priorities in negotiations in Albany, according to people familiar with his thinking.

There are also signs that Mr. Adams’s own support may be less persuasive than it once was.

Recent polls have shown that both Mr. Adams and Ms. Hochul are struggling to maintain popularity amid fears about elevated crime, painful inflation and a job market in New York that is lagging behind the national average.

A recent poll by Spectrum News NY1 and Siena College found that only about a third of New York City residents believe the city and state are on the right track, and 70 percent said they felt less safe since the pandemic. Residents gave Mr. Adams and Ms. Hochul only middling approval ratings.

The mayor’s decision will be a disappointment to Mr. Suozzi, a Long Island centrist who had hoped that his past support for Mr. Adams might lead to a reciprocal endorsement or at least a pledge of neutrality as he tries to oust Ms. Hochul in the Democratic primary. Mr. Suozzi chose one of Mr. Adams’s former deputies, Diana Reyna, as his running mate and has campaigned on a tough-on-crime platform that mirrors the mayor’s.

“I still consider Eric Adams a brother, but if he wants to stop surging crime in New York City he will need a new governor in Albany who will fix bail reform,” Mr. Suozzi said after the endorsement on Tuesday. “I will.”

Mr. Adams has also maintained a friendly relationship with Mr. Williams, a fellow Brooklynite who is challenging Ms. Hochul from the left.