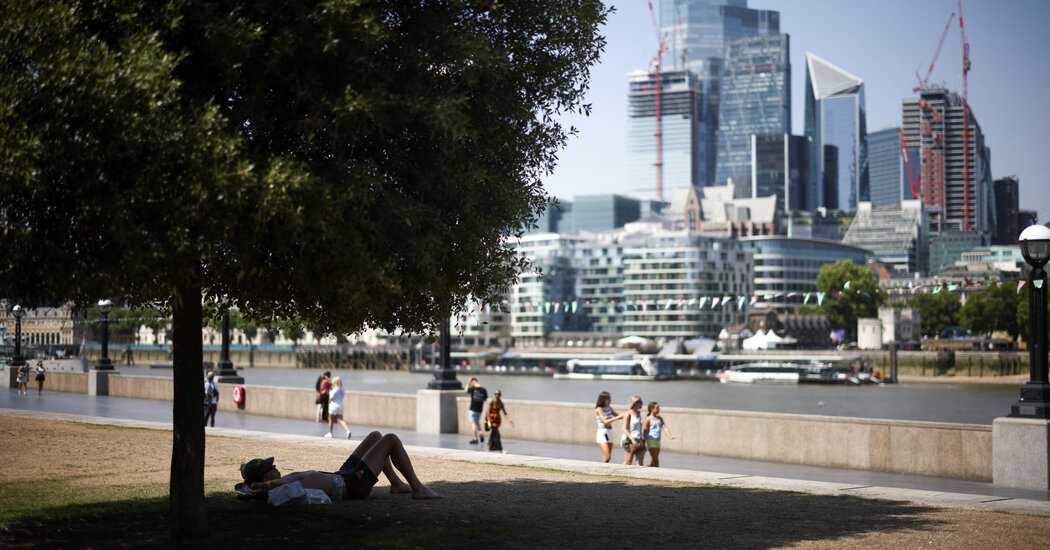 Most of Europe slid back into more typical summer temperatures on Wednesday morning, but the aftermath continued from the record-setting heat wave that threatened lives, destroyed buildings and upended daily routines for much of the continent this week.

Here’s what we are still watching.

Fires continued to burn through areas of southern Europe, in countries like Spain and Portugal where the heat was still intense on Wednesday.

In Greece, hundreds of firefighters were still battling a blaze stoked by strong winds in mountains north of Athens, forcing hundreds of residents to flee. The authorities ordered the evacuation of several villages on Tuesday afternoon after the wildfire ate through forest, fanned by winds approaching gale force. A children’s hospital was evacuated and police officers helped firefighters carry older residents out of their homes.

The situation was getting better in Spain, where firefighters have managed to extinguish half of the wildfires that have ravaged the country in recent days, consuming more than 230 square miles of forests and killing two people, including a firefighter. Some 15 fires were still active across the country as of Wednesday morning.

Speaking on Wednesday, Prime Minister Pedro Sánchez of Spain drew a clear line between the current wildfires and global warming.

And officials in France were cautiously optimistic on Wednesday as firefighters were mostly able to contain two huge wildfires that have burned nearly 80 square miles of dry pine forest in Gironde, in the southwest. President Emmanuel Macron is expected to meet with firefighters and other emergency workers in the area later in the day.

Vincent Ferrier, a local official, told reporters that the blazes had expanded very little overnight thanks to lower temperatures and higher humidity. For the first time in days, he announced that no new evacuations were scheduled.

“The fire is advancing more slowly,” he said. “But we want to remain careful.”

The authorities in the area had pre-emptively evacuated about 37,000 people over the past week, and no deaths have been reported. Structural damage has also been minimal, though some campsites around the Arcachon Bay, a popular vacation destination, were scorched to the ground. The police also released a man who had been taken into custody over suspicions of arson in connection with one of the fires.

In Brittany, a northwestern region of France that is unaccustomed to summer wildfires, one blaze had already burned thousands of acres since Monday but was also slowing down, the local authorities said.

At least 41 buildings were destroyed in the fires and 16 firefighters were injured on Tuesday as they tackled a number of blazes amid the record-breaking heat wave, said Sadiq Khan, London’s mayor, who urged the world to do more to tackle the climate crisis.

Mr. Khan said that London’s fire service on Tuesday had responded to about seven times as many calls as usual. On a normal day, firefighters might receive around 350 calls, he said, and on a busy day around 500. On Tuesday, the mayor noted, they received more than 2,600.

“This is not normal — these are exceptional times,” Mr. Khan told BBC News.

The city was one of 15 areas around the country whose fire service declared a “major incident.”

Fires continued to burn well into the late hours of Tuesday, but the London Fire Brigade said on Wednesday morning that most of the large-scale fires they had attended were under control.

Mr. Khan said that the fire service had come “under immense pressure” and that volunteers had been drafted in and training sessions canceled to scramble enough people to fight the blazes.

However, a spokeswoman for the Fire Brigades Union said that rampant cuts and staff shortages had also severely curtailed the capacity of the fire service in recent years and had directly affected the ability of the brigade to respond to the blazes on Tuesday.

There was still no indication on Wednesday as to the exact cause of the fires, but unusually dry weather in recent days has created tinderbox conditions. Mr. Khan told BBC News that most of the fires were grass fires and that a lack of rain in the past month had created “incredibly dry” conditions that allowed the fires to spread quickly.

Western Europe is seeing some relief.

Across much of Europe, forecasters were predicting that relief would come for the rest of the week, with more moderate temperatures and some rain beginning on Wednesday.

In London, forecasters said that the rest of the week was expected to more closely resemble a typical British summer. Wednesday was expected to bring a high of 27 degrees Celsius (80 Fahrenheit) in London, with the high dropping to 23 Celsius (78 Fahrenheit) on Friday, according to the Met Office, Britain’s national weather service.

La Teste-de-Buch, a small town in southwestern France that has battled wildfires for more than a week, was under a moderate thunderstorm warning for Wednesday, with forecasters predicting a high of 26 Celsius (78 Fahrenheit) during the day.

Amsterdam, which reached a high of 35 Celsius (95 Fahrenheit) on Tuesday, remained under a warning for extreme high temperature on Wednesday, with a high of 26 Celsius (78 Fahrenheit) and the possibility of thunderstorms. But the high was expected to fall to 21 Celsius (70 Fahrenheit) with some showers on Thursday, according to AccuWeather, a forecasting service.

There are still travel disruptions in Britain.

The record-breaking temperature this week did not make it particularly comfortable for commuters in Britain as transport authorities and railway services warned people to stay at home or face potentially severe disruptions.

The disruptions continued into Wednesday even as the weather cooled, and Britain’s railway network said that engineers were still inspecting tracks to ensure they were safe and repairing damage from the heat. Direct trains from London to Scotland and from London to Cambridge remained suspended in the morning, while some other lines ran limited timetables.

The disturbances prompted Britain’s rail network to set up a task force to work on recommendations for withstanding future heat waves.

“The weather we’ve experienced this week has put a huge amount of pressure on our infrastructure, our staff and our passengers,” said Andrew Haines, chief executive of the network, in a statement on Wednesday. “With extreme weather events becoming more frequent as our climate continues to change, we’ve got to pull out all the stops to make our railway as resilient as possible.”

So what the heck was that?

To some, the heat of the previous two days had been a life-threatening matter. The London Ambulance Service reported a 10-fold increase in incidents relating to heat exposure. To others, it was a frustrating nuisance, and something of a head-scratcher: This isn’t supposed to happen in Britain, right? Not this bad?

Across Europe, the searing temperatures invited questions about how to cope with such unusual summer heat. Many were forced to consider the reality of climate change and ponder whether the past two days had been a sweaty anomaly or a preview of a new normal.

Each heat wave seems to chip away at any sense that all will be just fine. Intense periods such as this one provide signs of a dawning realization of what could be in store, such as an increased market for air-conditioning units in Britain, a country that typically shuns them; governments crafting policies aimed at reducing overheating in homes; and news coverage that doesn’t shy from the connection to climate change. For two days, the heat was an oppressive, every-second presence, an unwanted house guest who demanded full attention.

But that’s over for now. The breeze feels nice, and the pub opens soon.