Five-Year-Old L.A. Times Investigation Becomes the Talk of the Town 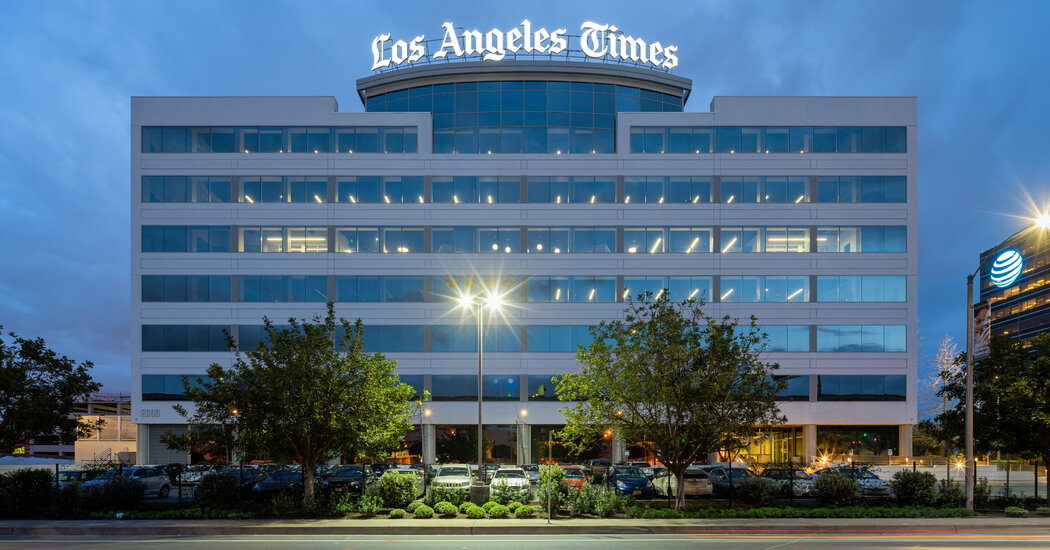 Five years ago, Paul Pringle and Matthew Doig were on the same team. Mr. Pringle, a veteran reporter at The Los Angeles Times, and Mr. Doig, an editor at the newspaper, were working on an article that would ultimately expose the drug abuse of a powerful former dean at the University of Southern California.

That report would lead to a series of other investigations involving U.S.C., culminating in a Pulitzer Prize for Mr. Pringle and two other reporters in 2019.

Behind the scenes, however, there was bad blood. Last week, Mr. Pringle published a book, “Bad City,” which, in part, claimed that top editors at The Times, including Mr. Doig, tried to slow-walk and defang that initial groundbreaking article, which detailed how the dean of U.S.C.’s medical school used drugs with young people, including a woman who had to be rushed to the hospital after an overdose.

Mr. Doig, currently an investigations editor at USA Today, snapped back last week on Medium, calling Mr. Pringle “a fabulist who is grossly misrepresenting the facts to support his false narrative.”

Just as there is reliably a song of the summer or a must-see blockbuster, the journalism industry now has a top candidate for the media controversy of the season. Over the last two weeks, reporters and editors from New York, Washington and Los Angeles have been trading notes and debating who was in the right, who was in the wrong.

Were editors at The Times being scrupulous or were they cowards intimidated by a major city institution that had also partnered with the newspaper, including on a books festival held on its campus? Had an investigative reporter doggedly overcome obstacles put in place by his own newspaper, or was he going too far in casting blame? The New York Times was even drawn into the controversy when the newspaper’s positive review of Mr. Pringle’s book drew criticism from Mr. Doig and others.

Or, as Janice Min, the chief executive of The Ankler and a former editor of Us Weekly and The Hollywood Reporter, put it, “It’s definitely summer, it’s definitely slow, and this has definitely risen to something that people are talking about.”

Controversies in Los Angeles media often do not capture the attention of a town where the entertainment industry rules. But this dust-up is different.

“I think part of why it’s caught hold here in L.A. is you can see it almost translating to the screen in that tale of heroic crusader versus an institution versus another institution that kind of has echoes of great newsroom dramas that have been made by Hollywood before,” said Ms. Min, whose Ankler newsletter and podcasting network cover entertainment. “And in that sense, I think the narrative has become really appealing to people in L.A. because it has a cinematic quality.”

To journalists specifically, it also offered a rare view into the often messy business of putting together an investigative article. When Mr. Doig published his Medium post, he also posted primary documents. He published the initial drafts of the article, along with his red-inked, handwritten notes in the margins.

Often, news reports that get an exhaustive post-publication airing are ones where something went horribly awry. But this was the rare case of getting a peek at drafts of an article that would ultimately be published, and proved bulletproof.

“I was intrigued because it’s not that often that you see an editor go all out and give up story drafts,” said Bill Grueskin, a professor at the Columbia University School of Journalism, and a former editor at Bloomberg News, The Wall Street Journal and The Miami Herald. “I teach a news editing class, and that draft that has all of his markings is going to be a great exercise for the class. It’s unusual to see an unpublished draft and then hold it up against a published, polished story and see what was changed, what was brought up and what was taken out.”

Mr. Pringle objected to how long it took for the article to publish — he and his colleagues had filed a draft months earlier — and said that the final version did not “measure up” to an earlier one, before intervention by editors. Mr. Doig pointed out that the paper did publish the article on the front page and that it had immediate impact.

The tempest also strikes an age-old nerve in journalism: the tensions in the editor-reporter relationship. Though the goals of both are the same — publishing a story that has impact — their prerogatives and approach can diverge.

“If you get sued, the magazine is going to pay the legal bills and cover the writer,” he continued. “As an editor, you have an extra obligation to make sure you’re going to be OK. It’s a different kind of lens in which you approach stories.”

A month after that initial article was published in July 2017, Mr. Doig was fired, along with other top editors at The Times, Davan Maharaj and Marc Duvoisin. The company said at the time — The Times is now under different ownership — that the moves were part of a restructuring. Mr. Pringle said that it was because of an investigation into how they handled his U.S.C. article. Mr. Doig said he was never given an explanation about why he was fired. Mr. Maharaj, who has also objected to Mr. Pringle’s claims, said that he was told his dismissal was part of a newsroom reorganization.

“We did nothing wrong,” Mr. Maharaj, the former editor of The Times, said. “We challenged him to do a far better story.”

Mr. Duvoisin, who was a managing editor of The Times, said of Mr. Pringle, “There’s no substance whatever to his claims.”

In interviews, both Mr. Pringle and Mr. Doig said they had been heartened to receive many messages of support from their peers. But both men are still unhappy about how it all went down — and deeply certain that they are in the right.

Mr. Pringle said: “Dealing with this gaslighting in my own profession. Is that pleasant? No, but it’s important work. I have to do it for the reader.”

Mr. Doig said in an interview that the experience was not one that he exactly relished.

“I hate it,” he said. “I wish I was talking to you about anything else related to the media except for this.”

Mr. Doig said he was weighing whether to write a follow-up to his first Medium post.

“It’s an uncomfortable position to be in but it’s better now that I’ve gotten emails from all corners of journalism,” he said. “That’s helped. But I don’t like this, and I’d rather be doing other things.”