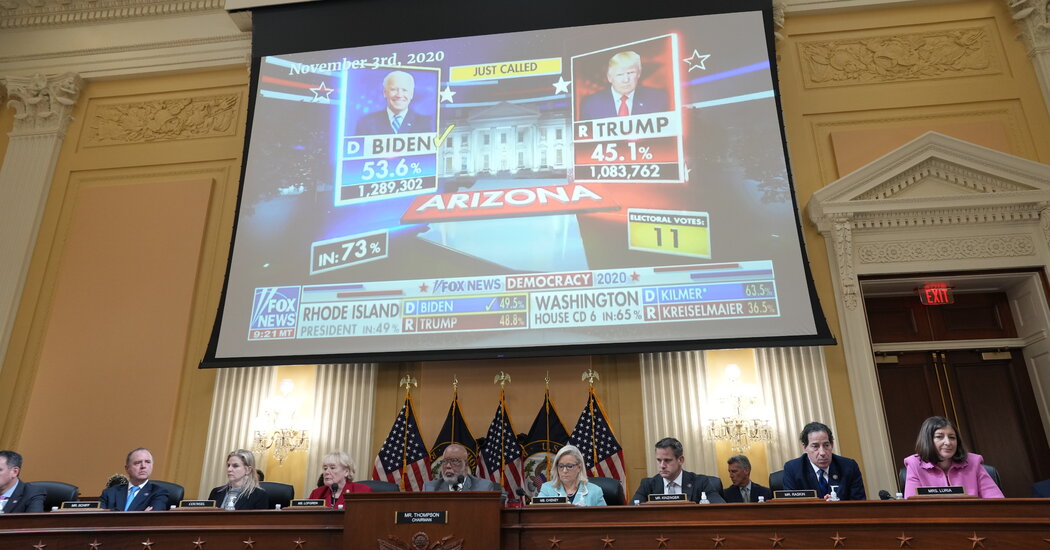 After declining to broadcast the Jan. 6 committee’s prime time hearing last week, Fox News on Monday broke into its regular daytime programming to feature the latest round of witnesses, providing its audience with a retelling of the events leading up to that day that is often absent from the network.

Those tuning in on Fox experienced a somewhat awkward moment as the focus turned to the network itself and the testimony of a former politics editor there, Chris Stirewalt, who helped with coverage of the 2020 election.

Mr. Stirewalt, the first witness of the day, described how the Fox News decision desk ended up making the pivotal call that President Biden had won Arizona.

“Our decision desk was the best in the business,” Mr. Stirewalt said. When asked whether former President Donald J. Trump had any basis to declare victory, Mr. Stirewalt answered, “No, not at all.”

He explained the inner workings of the network’s process for making calls on election night, offering a rarely seen glimpse of its independent data and polling operation. He described how the network had strict protocols in place to make a call, including that each member of the decision desk had to be in agreement.

On Election Day around 11:20 p.m., Mr. Stirewalt said they were so certain that Mr. Trump could not come from behind and overtake Mr. Biden in Arizona that they were ready to move on to call the next state.

“We were able to make the call early. We were able to beat the competition,” he said. “We looked around the room, everybody says ‘yay,’ and on we go.”

That kind of certainty in the results of the election was at odds with what viewers on Fox would see in the coming days from pro-Trump hosts like Sean Hannity, Tucker Carlson and Laura Ingraham. All three helped give credence to discredited stories about voter fraud in states like Arizona and Pennsylvania.

But viewers tuning into Fox on Monday saw many of those stories rebutted by senior officials in Mr. Trump’s administration and campaign, who testified that claims of stolen votes had no grounding in reality.

It may seem strange that Fox News, which is unabashedly right-leaning, would have a decision desk that aimed to call the race first, even if it was bad news for Republicans. But Fox has always aimed for must-see TV moments that surprise their audience and beat the competition. Internally, that’s what producers thought their election night was, and they misjudged the fury it would set off with the former president and his supporters.