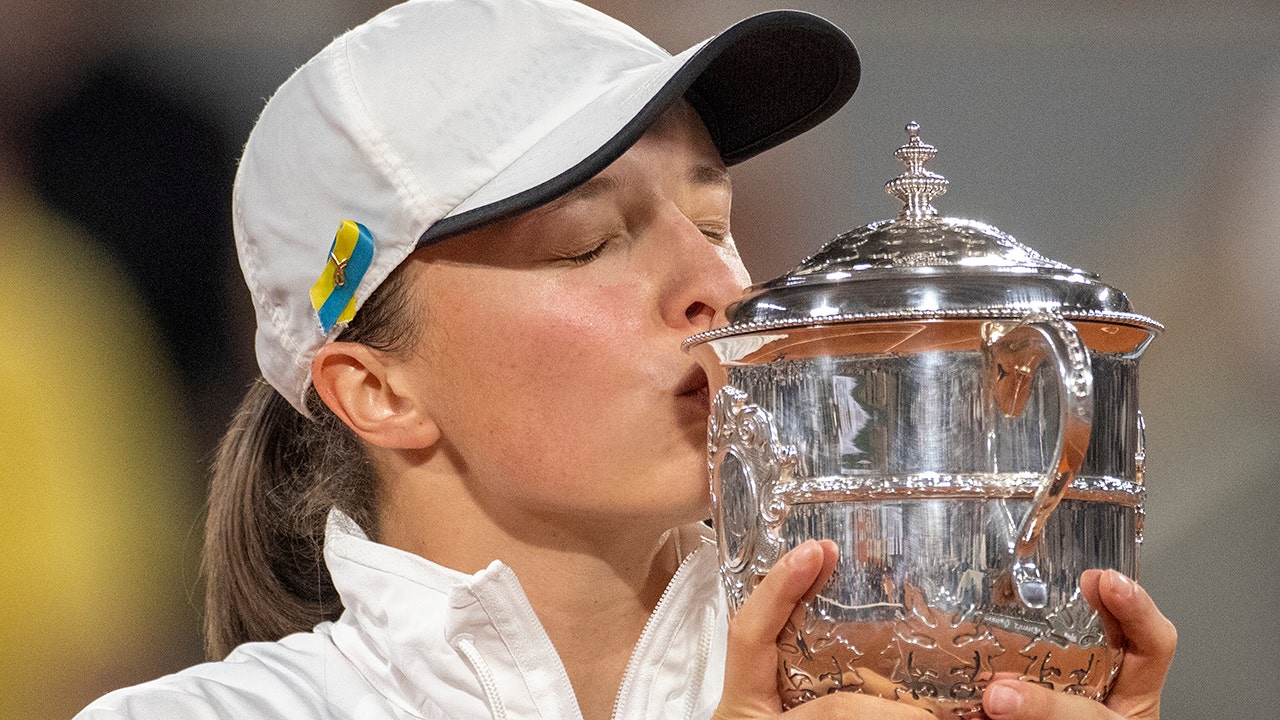 French Open champion Iga Swiatek was a bit perplexed by a question from a reporter after defeating American Coco Gauff to win her second championship at Roland Garros.

She extended her winning streak to 35 matches, one better than Serena Williams’ 34 and tied Venus Williams’ mark from 2000.

At the end of her press conference on Saturday, Swiatek was asked whether she applies makeup when she goes out on the town. British sports broadcaster Catherine Whitaker relayed the exchange between the reporter and the Polish tennis star on social media.

“The second question is, outside of the court, when you go to a party, do you use makeup? Do you like to go elegant and smart and so on? Because many players we have seen in the past, they were staying hours in front of the mirror before going on court and using the makeup. And you seem very natural like this.”

FRENCH OPEN PROTESTER TIES HERSELF TO NET DURING MEN’S SEMIFINAL

Iga Swiatek of Poland celebrates her victory during the trophy ceremony following the women’s final against Coco Gauff at the French Open June 4, 2022, in Paris.
(John Berry/Getty Images)

Swiatek seemed baffled in her response.

“OK. Thank you,” she replied. “Well, I’m wearing a hat, so I don’t have to worry about my hair. That’s the most positive thing. I don’t wear makeup because I don’t feel like I kind of have to. And, also, I don’t think that will change something. Also, it’s going to come off when I use a towel.

“Well, that’s … Wow, I don’t have that in my PR brief, you know, so it’s hard to answer. Well, I’m not using makeup like really often. I honestly just learned how to do makeup like six months ago, so that’s pretty embarrassing.”

Iga Swiatek of Poland with the winner’s trophy after her victory over Coco Gauff of the United States in the women’s singles final on Court Philippe Chatrier at the 2022 French Open at Roland Garros June 4, 2022, in Paris.
(Tim Clayton/Corbis via Getty Images)

Swiatek now has two major wins – both at Roland Garros. Her best finish in any other major is in the semis at the Australian Open earlier this year.