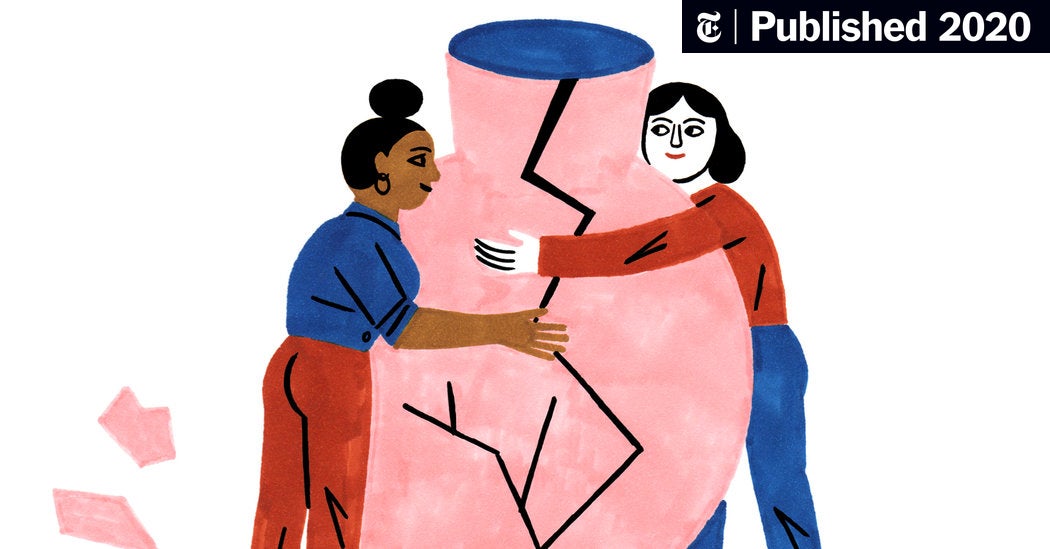 Elana Arian and Julia Cadrain, a same-sex couple in Brooklyn, recently fought about a hat.

OK, it wasn’t really about the hat. (It never is.)

Cadrain likes things tidy. Really tidy. To the point where it annoys her entire family.

“I put things away while they’re still using them,” she admitted.

So when Cadrain found one of Arian’s favorite hats lying around, she promptly scooped it up, but neglected to store it properly. Arian later discovered her hat had accidentally been crushed.

“I was irrationally so angry about that,” Arian said.

They took a long walk, and had an honest, calm conversation. Soon, they realized that Arian’s frustration was actually about something deeper.

“One of the things that came up was this stress that we’re both under as a result of the quarantine,” Cadrain, 37, said. The couple is caring for their 9-month-old daughter while also guiding their 7-year-old daughter through distance learning. Arian, 39, a freelance musician, is working much less than she typically would. They had each been coping with this in different ways.

“It feels like a very lesbian way to fight. There’s definitely never any yelling. There’s no voice-raising,” Cadrain said. “It’s more kind of tense and quiet and sort of process heavy.”

But is there really a lesbian way to fight? Or a way to address conflict that is specific to gay men? While there is not much research to draw from, the studies that do exist suggest that, on average, same-sex couples resolve conflict more constructively than different-sex couples, and with less animosity.

There are always exceptions, and even the healthiest of gay couples are not continually basking in a rainbow-hued utopia. They have problems just like everyone else.

If they did not, “I’d be out of business,” said Rick Miller, a psychotherapist in Boston who works with gay and straight couples.

Likewise, it is unfair to lump all straight couples together, and disingenuous to suggest that they are not capable of arguing in a healthy way.

But because male and female same-sex couples each have different strengths that help them endure, we can all learn from them, Miller said.

Here are some constructive methods to handle disagreements, as observed by researchers of gay couples:

Use humor to defuse anger

Cracking a joke in the midst of a heated moment can backfire, but when done properly, “it almost immediately releases the tension,” said Robert Rave, 45, who lives with his husband, David Forrest, in Los Angeles.

Rave cited a recent car trip where Forrest, 35, used humor to help end an escalating argument over whether they should rely on Google Maps.

“For me, as a general rule, I self-admittedly will get very much in my head. And David will just simply take the piss out of it and make me laugh,” Rave said.

“Gay and lesbian couples were gentler in raising issues, far less defensive, and used more humor than heterosexual partners,” said John M. Gottman, Ph.D., the lead author of the study and co-founder of the Gottman Institute, an organization that provides resources, like workshops and online courses, to help couples strengthen relationships and offers professional training to clinicians. “These were large differences.”

If you find that your heart is pounding during an argument, take a break, said Julie S. Gottman, Ph.D., co-founder and president of the Gottman Institute.

“During the time when you’re apart don’t think about the fight. Instead, practice something self-soothing, like reading a book, something distracting so that your body can calm down,” she said.

But if you need to leave, you should always say when you are going to come back and rejoin the conversation, she said, adding that the minimum amount of time away should be 30 minutes and the maximum should be 24 hours.

Gay men were less likely to go into fight-or-flight mode when they were in conflict, said the Gottmans, who are married, and they also reach resolutions more quickly than different-sex couples.

Treating your partner with respect is always important, but especially during an argument when you might say things you’ll later regret. When your heart is racing, “all you perceive is attack, no matter what your partner is saying,” Dr. Julie Gottman said.

And that’s exactly why Rave and Forrest try to end an argument quickly.

“Life is too short to have everything be so dramatic,” Rave said.

A 2018 study suggested that when members of a same-sex couple try to influence one another, they are more likely to offer encouragement and praise rather than criticism or lectures when compared to different-sex couples.

Be mindful of each other’s emotional needs

Unlike gay men, women who are married to women are “constantly monitoring each other’s emotions and needs and responding to them — but they are doing it for each other, so it’s reciprocated,” said Debra Umberson, Ph.D., a professor of sociology and the director of the Population Research Center at the University of Texas at Austin.

Two men, in contrast, do less monitoring, which is less labor-intensive.

“They’re on the same page about it,” said Dr. Umberson, who has studied gay couples for more than a decade. Two men will tell each other what they need or speak up when there is an issue.

If a couple has similar philosophies about emotional monitoring, there is less potential for conflict between them, Dr. Umberson said.

In heterosexual couples, women are the ones who tend to do emotional monitoring and responding, but the men tend to be unaware of it and often are not doing it, she added — and that can negatively affect the couple by making them feel more frustrated, worried, irritable or upset.

Dr. Umberson’s latest study, published in May, examined the psychological toll of providing for the emotional needs of a spouse. The researchers found that the well-being of women married to women seemed to be affected less by the work of assessing and managing each other’s emotions than that of women married to men. Earlier research suggests this could be because lesbians are more reciprocal in taking care of a spouse’s emotional needs and also have a greater appreciation for doing so.

Strive for equality in your relationship

Same-sex couples do not have traditional societal roles defining which tasks each member of the couple ought to perform at home or how they ought to relate to one another, which allows them to create their own dynamic.

Straight couples should negotiate and discuss things more, Cadrain suggested, and “don’t presume certain roles or jobs in terms of who is the breadwinner or how the household is taken care of.”

Although Arian cannot remember the last time she made the bed, she has other responsibilities, like being the chef of the family — or as Cadrain calls her, “C.E.O. of the food and the nourishment.” And because Arian was a teacher for many years, she is responsible for distance learning and staying on top of their 7-year-old’s schooling.

They do not typically fight about chores, the couple said, because they try to divide them based on what they like to do best or which of them is best positioned to complete a task.

“I suspect that has to do with gender roles not being present,” Arian said.

In heterosexual couples, researchers have found more of a power difference between members of the couple than among same-sex couples, Dr. John Gottman said.

“The same-sex couples we studied were very aware to try to make the power relationships more equal between them,” he said.

And if members of a same-sex couple disagree, they are more likely to listen to one another’s point of view, he added.

The Gottmans’ 2019 study, an assessment of more than 40,000 couples worldwide who were about to begin couples therapy, found that same-sex couples have a better quality of intimacy and friendship in their relationships.

Recognize and appreciate your differences

Each person brings their own baggage and their own way of looking at the world, Miller said.

“Really appreciating those differences and similarities and figuring out how to deal with it together — that’s what makes a healthy couple. And that goes across all borders, groups and genders,” he added.

Cadrain and Arian, for example, said they tried to be mindful of each other’s different communication styles.

“I tend to kind of under-communicate when I’m upset,” said Arian, who said she has a temper but often becomes restrained and terse during arguments. “I’m not proud of it.”

Cadrain, however, likes to talk things out — sometimes before Arian is ready. Simply being aware of their differences helps them manage conflicts when they arise.

Rave and Forrest are also different in a lot of ways: Forrest likes to go out and be social; Rave is more of a homebody. This has been a point of contention in their relationship.

“Allowing space for the person to be themselves is so important, and not shaming that person into what you want them to be,” Forrest said.

Finally, when thinking about your differences, try not to focus too much on the negative.