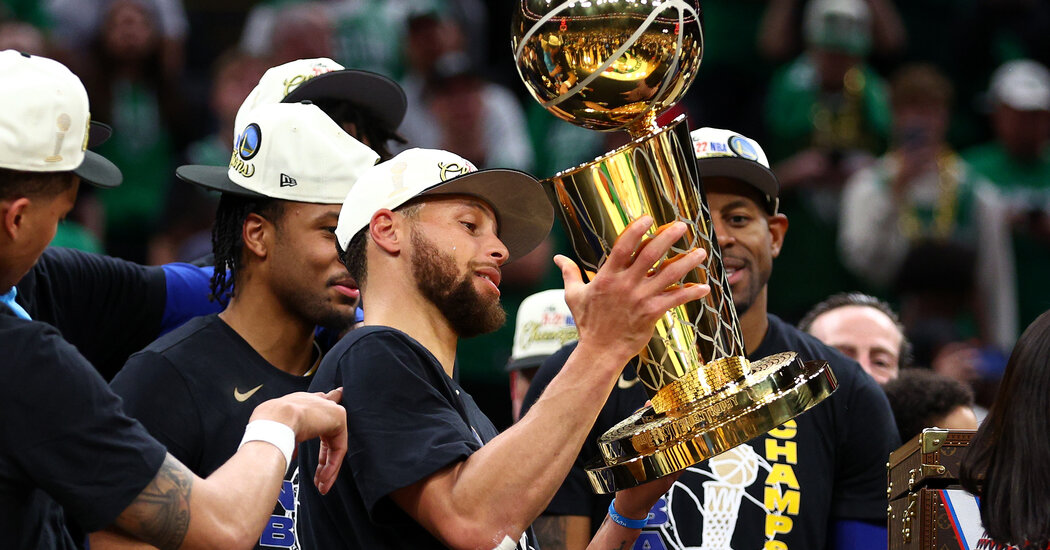 BOSTON — It turns out the dynasty had just been paused.

Golden State has won the N.B.A. championship again, four seasons after its last one. It is the franchise’s seventh title and the fourth for its three superstars: Stephen Curry, Klay Thompson and Draymond Green, who have spent the past decade growing up together, winning together and, over the past three years, learning how fragile success can be.

On Thursday, they defeated the Boston Celtics, 103-90, in Game 6 of the N.B.A. finals. They won the series, 4-2, and celebrated their clinching victory on the parquet floor of TD Garden, below 17 championship banners, in front of a throng of disappointed partisans. The fans in Boston booed their team as the first half reached its close, and rarely got reasons to hope after it.

The Celtics took a 14-2 lead to open the game, playing better than they did in their lackluster start to Game 5, but Golden State’s firepower threatened to overwhelm them. For nearly six minutes of playing time from late in the first quarter until early in the second, Boston couldn’t score.

Golden State built a 21-point lead in the second quarter, and kept that cushion early in the third.

With 6 minutes 15 seconds left in the third, Curry hit his fifth 3 of the game, giving his team a 22-point lead. He held out his right hand and pointed at its ring finger, sure he was on his way to earning his fourth championship ring.

The moment might have motivated the Celtics, who responded with a 12-2 run. Ultimately, though, they had too much ground to recover.

Curry, who had 34 points on 12 of 21 shooting in Game 6, won the finals Most Valuable Player Award.

Golden State celebrated after two seasons of subpar records, one which made it the worst team in the N.B.A. Its players and coaches spent those seasons waiting for Thompson’s injuries to heal, for Curry’s (fewer) injuries to heal and for new or young pieces of their roster to grow into taking on important roles.

When they became whole again, the three-player core talked about cementing its legacy.

They were so much younger when their journeys together began. Golden State drafted Curry in 2009, Thompson in 2011 and Green in 2012.

Curry was 27 when they won their first championship together in 2015. Thompson and Green were both 25.

That season was also Steve Kerr’s first as the team’s coach.

Golden State went 67-15 and breezed through the playoffs to the N.B.A. finals, having no idea how hard getting there could be. The next year the team set a league record with 73 regular-season wins but lost in a return trip to the finals. Kevin Durant joined the team in free agency that summer, and Golden State won the next two championships, becoming hailed as one of the greatest teams in N.B.A. history.

The champions grew as people and as players during this stretch. Curry and Green added children to their families. They were rock stars on the road, with swarms of fans waiting for them at their hotels. Three championships in four seasons made Golden State seem invincible.

Only injuries could stop them.

The dynastic run ended in devastating fashion in 2019 during their fifth consecutive finals appearance. Durant had been struggling with a calf injury, then tore his right Achilles’ tendon in Game 5 of the finals against Toronto. Thompson tore the anterior cruciate ligament in his left knee during the next game. The Raptors won the championship that day.

“It was the end of an era at Oracle,” Curry said, referring to Golden State’s former arena in Oakland, Calif. The team moved to Chase Center in San Francisco in 2019. He added: “You’re getting ready for the summer, trying to regroup and figure out what’s going to happen next year.”

The two seasons of futility that followed were difficult for all of them, but no more so than for Thompson, who also tore his right Achilles’ tendon during the fall of 2020, sidelining him for an additional year.

During this year’s finals, he has often thought about that journey.

“I wouldn’t change anything,” Thompson said. “I’m very grateful and everything I did to that point led to this.”

Heading into this season, Golden State wasn’t expected to return to this stage so soon. This was particularly true because heading into the season, Thompson’s return date was unclear.

But then, hope. Golden State opened the 2021-22 campaign by winning 18 of its first 20 games. The team had found a gem in Gary Payton II, who had been cast aside by other teams because of his size or because he wasn’t a standout 3-point shooter. Andrew Wiggins, acquired in a 2020 trade with Minnesota, Kevon Looney, who was drafted weeks after that 2015 championship, and Jordan Poole, a late-first-round pick in 2019, showed why the team valued them so much.

Curry set a career record for 3-pointers and mentored the team’s younger players.

Who could say how good this team might be once Thompson returned?

That answer came in the playoffs.

Golden State beat the Denver Nuggets in five games, and the Memphis Grizzlies in six. Then Dallas took only one game from Golden State in the Western Conference finals.

“The things that I appreciate today, I didn’t necessarily appreciate those things then,” Green said. “In 2015, I hated taking pictures and, you know, I didn’t really put two and two together. Like, man, these memories are so important.”

They vowed not to take for granted any part of the finals experience. Green and Curry made sure their children enjoyed it with them.

“Seems routine, but I just know how special this is,” Thompson said before Game 4. “I mean, I’m trying to just be present in everything I do during this time, even this interview, and not look ahead. Not even looking ahead to tomorrow.”

They faced a Boston Celtics team that was young, just like they were in 2015, led by the 20-somethings Jayson Tatum, Jaylen Brown and Marcus Smart, shepherded by the elder statesman Al Horford. The Celtics did almost everything the hard way as they sought the storied franchise’s 18th championship.

They swept the Nets in the first round but went to seven games against the Milwaukee Bucks and the Miami Heat. They won when they had to, and committed too many careless turnovers when they didn’t.

Boston was the younger, stronger and more athletic team in the finals. The Celtics did not fear Golden State, or the grand stage, and proved it by winning Game 1 on the road. The teams traded blows, with Boston confident in its ability to bounce back from almost any setback. Until Game 5, the Celtics had not lost back-to-back games in the playoffs.

Curry had his way against Boston’s defense in Game 4, scoring 43 points. Then in Game 5, the Celtics stymied his efforts, only to have his teammates make up the ground he lost.

At a news conference Wednesday afternoon, Green recalled a moment during Golden State’s flight to Boston from San Francisco between Games 5 and 6. He, Thompson and Curry were sitting together when they were spotted by Bob Myers, the team’s general manager and president of basketball operations.

At a separate news conference a few minutes later, Thompson was asked about that moment and why the three of them still enjoy each other’s company. Curry stood against a wall, watching, waiting for his turn to speak.

“Well, I don’t know about that,” Thompson said. “I owe Draymond some money in dominoes, so I don’t want to see him too many times.”

Curry bent at the waist, doubled over with quiet laughter.

“I was half asleep,” Thompson continued. “Draymond and Bob were chatting their hearts away for six hours on a plane ride. I was just trying to get some sleep.”

Curry said later, “All the personalities are so different. Everybody comes from different backgrounds. But we’ve all jelled around a collective unit of how we do things, whether it’s in the locker room, on the plane, the hotels, like whatever it is. We know how to have fun and jell and keep things light but also understand what we’re trying to do and why it all matters in terms of winning games.”

N.Y.C. Will Expand Compost Pickup to Queens in October