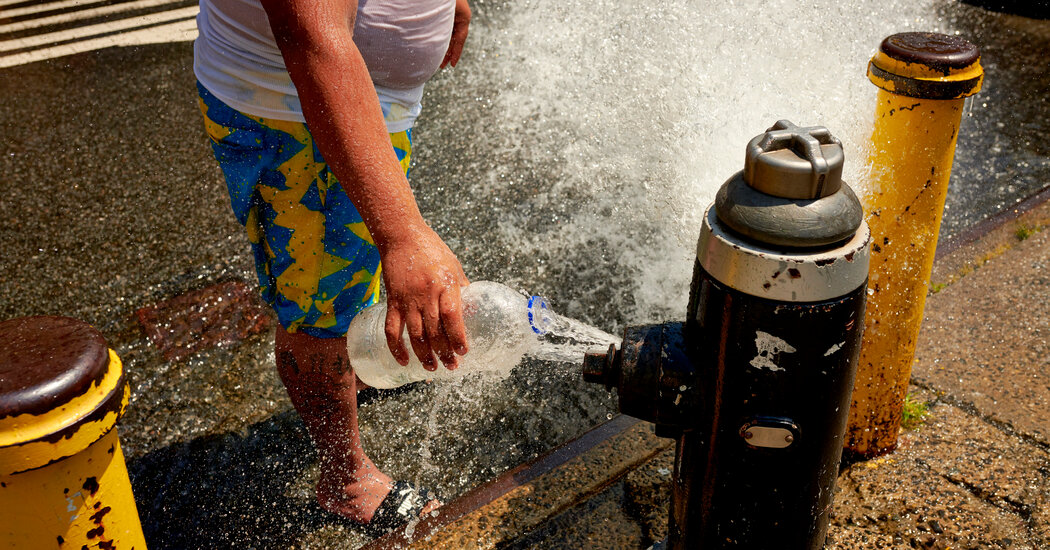 Scorching temperatures swept the Northeast on Sunday in the summer’s first prolonged heat wave, with a record-breaking five straight days of triple-digit temperatures in Newark and blistering heat in Boston; Providence, R.I.; and Manchester, N.H.

Other parts of the country also sweltered, with Oklahoma enduring temperatures that have topped 100 degrees in nine of the past 11 days.

The baking heat underscored the sobering reality that such dangerous temperatures are becoming a summertime norm for the United States and elsewhere, with heat waves, wildfires and droughts disrupting day-to-day life across the globe.

Heat waves in the United States jumped from an average of two per year in the 1960s to six per year by the 2010s. The last seven years have been the warmest in the history of accurate worldwide records.

The Northeast heat surge, which hit some of the country’s most densely populated corridors, sent residents scrambling for relief. In New York City, temperatures stayed just shy of record highs Sunday afternoon, hitting 94 in Central Park, as lines formed at the city’s pools, despite many facing lifeguard shortages.

William Jimenez, 59, brought his 13-year-old son to the Crotona Park pool in the Bronx early in the day, knowing that the spot would be mobbed later.

“The weather is getting hotter and hotter,” he said. “The best thing is to be in the pool and the park.”

Elsewhere in the Bronx, many streets turned into asphalt water parks, thanks to open fire hydrants spilling onto sidewalks. In several spots wooden planks were extended into the street for people to avoid the small rivers.

Tina Hernandez, 24, and her 12-year-old stepdaughter laughed as they flicked water at each other by an open hydrant on Monroe Avenue.

“It’s definitely been crazy,” Ms. Hernandez said. “The house is the hottest part in the summer. We’ve been trying to run inside the sprinklers. It’s been hard keeping cool.”

From Boston to Philadelphia to St. Louis, major cities declared heat emergencies and advisories that lasted throughout the weekend, some triggering services to keep residents cool, like opening libraries as cooling centers. In notoriously swampy Washington, D.C., where temperatures hovered in the 90s, officials extended opening hours for some of the city’s pools, and Kansas City, Mo., released tips on Twitter for residents to keep heat from damaging the foundations of their homes.

Philadelphia, which declared a heat emergency starting on Thursday, halted a plan to shut off water to customers with delinquent bills, citing the heat wave.

Terry Greene, 62, said he used to enjoy the Washington, D.C., heat but has grown grateful for air conditioning at the church where he is employed as a maintenance worker.

“If I’m going to be working outside, I just prepare for it. I know to come early in the morning,” Mr. Greene said.

Further south, Jesse Williams, 40, was gearing up for a long shift in front of a 600-degree oven at Memphis Pizza Cafe in Memphis, Tenn., where the National Weather Service issued a heat advisory. Temperatures were expected to hit nearly 100 degrees.

“If I didn’t have this little shop fan blowing on me, I’d probably get heat stroke,” Mr. Williams said.

In Boston, race organizers postponed the city’s annual triathlon. In New York, organizers shortened a similar race to account for the temperatures; the water temperature soared to nearly 80 degrees when the race started around dawn.

In Philadelphia, the utility PECO rolled out strategies for customers to save electricity, like washing clothes in cold water and installing window coverings. In New York, officials asked residents to turn their air-conditioners to 78 degrees to ease stress on the city’s power grid. By the afternoon, no major outages had been reported — something energy officials attributed to more efficient appliance systems.

“I’m 53 years old, and I don’t remember it ever being this hot,” said Lonnie Coleman, a retired Philadelphia School District employee who relaxed by the Schuylkill in the morning hours on Sunday, hoping to beat the afternoon heat.

Elsewhere in Philadelphia, children, dogs and a few adults splashed in the shallow water at the Logan Square fountain.

Laura McSloy, a food service worker from the Brewerytown section, was sitting in the fountain pool.

Temperatures beyond the Northeast also skyrocketed. Outside Tulsa, Okla., Charley Pearson, 63, said the prolonged heat had been difficult for the small volunteer Fire Department of which he is chief. He described one particularly difficult situation, involving a man who had collapsed outside his home with heart problems.

In downtown Oklahoma City, where temperatures rose to 96 degrees by the early afternoon, children played in the water feature at Scissortail park, laughing and splashing. But the feature wasn’t just for play: It is a last-ditch drinking source for some of the city’s homeless people. Brian Brust, 52 and newly homeless, said it was one of the first lessons he learned when he started living on the streets.

“People tell me it’s the place to go,” Mr. Brust said. “It’s hard to find water on the streets.”

He waited in the shade of the Ronald J. Norick Downtown Library with numerous other homeless people around noon. It is one of the state’s 75 designated cooling centers but did not open until 1 p.m.

The crippling heat on Sunday descended as pockets of the country were already struggling to manage a wave of heat-related emergencies, like the Southwest’s crippling drought and a distressingly active wildfire season in New Mexico, Arizona and California. The Oak Fire, near Yosemite National Park, has scorched more than 14,000 square acres.

A similarly scorching heat wave is set to sweep parts of the Northwest next week, with cities like Seattle expected to face temperatures that top 100 degrees.

In the Bronx, Wanda Rosser, 58, and Yvonne Miles, 62, friends for over 40 years, sat in the shade outside the New York City Housing Authority’s Butler Houses development on Sunday afternoon.

They had different reactions to the heat.

But Ms. Miles said she struggled with her asthma in the hot weather.

Still, she said, “You’ve got to live. It’s Mother Nature.”