I paid $85 for 2 hours in an airport ‘nap room’ and a 30-minute shower, and it was nice but probably not worth it 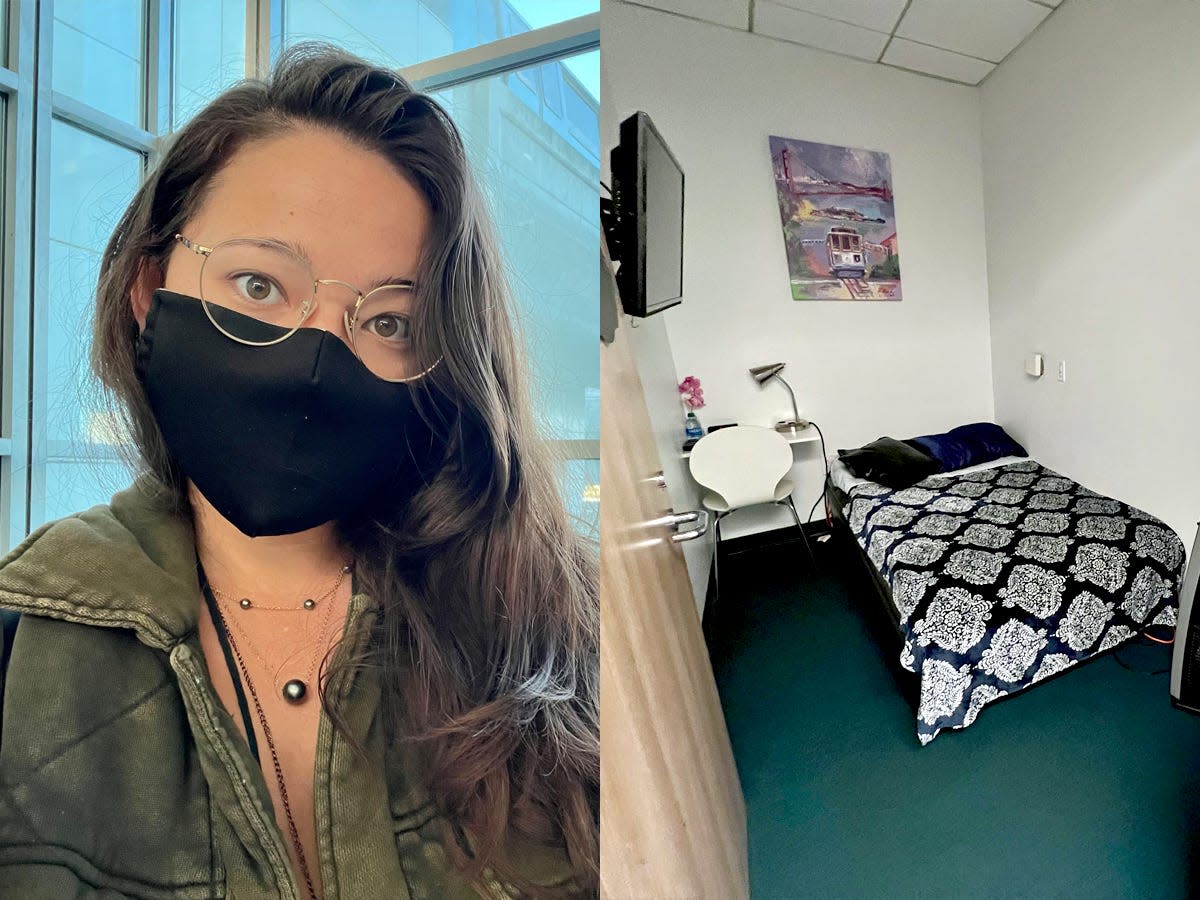 As a frequent flyer, I’m always looking for special amenities to enhance my travel experiences.

After seeing a TikTok about renting an airport sleeping pod, which had over 1.8 million likes as of July, I decided to see if I could try something similar on my trips to Los Angeles and San Francisco.

I arrived three and a half hours before my flight with the intention of renting a nap room for an hour.

I typically get to the airport two hours early, but I wanted to give myself an extra hour to experience the nap room.

Since I used the Marin Airporter bus to get to the airport, I had to adhere to the company’s schedule and caught the 5:30 a.m. shuttle, which got me to San Francisco International Airport just before 6:30 a.m. for my 10:10 a.m. flight.

I inquired about the nap rooms when I flew into the airport two weeks prior, so I knew they were located in the international terminal. Conveniently, that was also the terminal I was flying out of on Hawaiian Airlines.

It wasn’t easy to find the nap rooms at first. My advice: Look out for maps of the airport to find the location.

After checking in for my flight at a self-service kiosk, I waited in line to drop off my checked luggage for about 20 minutes.

Then I spent another 10 minutes trying to figure out where Freshen Up was located.

There was no one at the airport information desk when I checked. After wandering around for a bit, I finally found a map that listed the facility, and I realized it was on the other side of the terminal.

The nap rooms are located before the security checkpoint.

Thankfully, I read online that the nap rooms were situated before security, otherwise, I might have gone through the checkpoint and missed it entirely.

I finally got to Freshen Up at 7:05 a.m., but the attendant wasn’t at the front desk when I arrived, and I had to wait a few minutes for them to return from the back.

While I waited, I perused the storefront, which sells other travel necessities.

The front space had two walls stocked with travel-size toiletries and other last-minute travel basics, like wipes and sleeping masks.

There were also a few computers that could be rented for $5 per 15 minutes and printing services for $6 and up.

The pricing at the airport didn’t match what was listed online.

The official airport website didn’t offer much information about the nap rooms aside from general location, hours, and contact number.

The website for Airport Travel Agency, which owns Freshen Up, had the same details as well as pricing, which was listed as $40 for a minimum of one hour in the nap room and $25 for a shower.

Before my visit, I called the location and an employee told me this pricing was accurate and rooms are first-come, first-served, and can’t be booked ahead of time.

When I arrived, the attendant told me I had to book a two-hour minimum nap for $70, or I could get three hours for $100 with a discounted shower for $15. (A spokesperson for Airport Travel Agency and Freshen Up did not respond to Insider’s requests for clarification on the pricing discrepancy.)

I didn’t have three hours to spare, so I opted for the two-hour minimum and a shower.

On my receipt, it appears I got the discounted $15 shower even without the three-hour deal. I’m not sure why my receipt says “Employee/Military” since I don’t work at Freshen Up nor am I in the military.

The nap room was pretty small and I found it to be a little loud.

The attendant showed me to room two, which they told me was the quietest one.

But because it’s essentially a store as well as a nap/shower service, a doorbell-like chime goes off every time someone walks in or out of the lobby. Unfortunately, I could still hear it from inside my room.

A spokesperson for Freshen Up said the company needs to have a bell in the lobby so that if the attendant working is in the back, they still know when a customer enters.

There were also a couple of groups of travelers who came in to use the computers, and I could hear them talking throughout my stay.

Earplugs were not included with my stay, so I turned on the provided fan to drown out some noise, which helped. If I did stay again, I would recommend bringing a pair of earplugs, just in case.

When asked for comment on my experience a spokesperson for Freshen Up said, “We do not market ourselves as having hotel-type accommodations with soundproof rooms. We try to make the best out of the space that was allotted to us by the airport.”

There were a lot of helpful amenities, but I didn’t use most of them.

I only ended up using the bed, mirror, and fan. I also drank the water because I accidentally left my reusable bottle behind.

The bed was comfortable to sleep in.

Lying down felt amazing, but since I’d been traveling on the road, this was the first normal bed I’d slept in for almost two weeks.

The mattress had an ideal balance of being firm but still soft on top.

Though I loved the silk pillow, I personally thought the leather cushions were hard and perhaps more for aesthetics than comfort.

There was only one fuzzy blanket on the bed, which was enough for me, but those who run cold would probably want to request an extra layer.

I’m pretty sure the bed was a twin.

I later realized they didn’t tell me what size the bed was, and when I called to inquire about it, the attendant I spoke to didn’t seem to know the answer.

Through my photos and a bit of research, I was able to determine it was likely a twin.

Napping for an hour was refreshing, especially since I hadn’t gotten much sleep the night before.

I set an alarm for 8:25 a.m. then turned off the lights. I was pleasantly surprised by how dark it was inside the room.

I ended up snoozing my alarm for five minutes, so I used the room for about an hour and 25 minutes. Still, I had to pay for a minimum two-hour slot.

There were two all-gender restrooms and a shower room available.

After my nap, I used the toilet before taking a shower in another private room.

It was spacious but pretty standard. I got in the shower around 8:50 a.m.

I was granted 30 minutes in the shower room but aimed to only use half that time so I could head to security at 9 a.m. By the time I actually left, it was a bit closer to 9:10.

The showers came with all of the toiletries I needed, which was great.

The shower room provided everything I needed — travel-size shampoo, conditioner, body wash, and lotion as well as a washcloth, towels, shower shoes, and a hair dryer.

Keep in mind the room can get quite wet and slippery.

Additionally, I think I would have appreciated it if the complimentary shower shoes had more grip because of how slippery the floor became. Travelers may want to bring their own.

It felt good to shower but, in retrospect, I should’ve waited until I got home since I was about to travel on a plane anyway.

I enjoyed my experience at Freshen Up but walked away debating if the price was worth it.

Overall, I was grateful for the opportunity to rest in a nap room and refresh before my trip. This is an amenity I wish more airports offered, especially for travelers who have a delayed flight or brief layover.

That said, I didn’t appreciate the price discrepancies from the company’s website to what the attendant told me in person.

I went in expecting to spend $40 on the nap room and ended up having to pay $70. Even with the discounted shower, I paid $20 more than I anticipated.

Overall, I wouldn’t go out of my way to stay in a nap room again, but I’d love to see them as options at more airports.