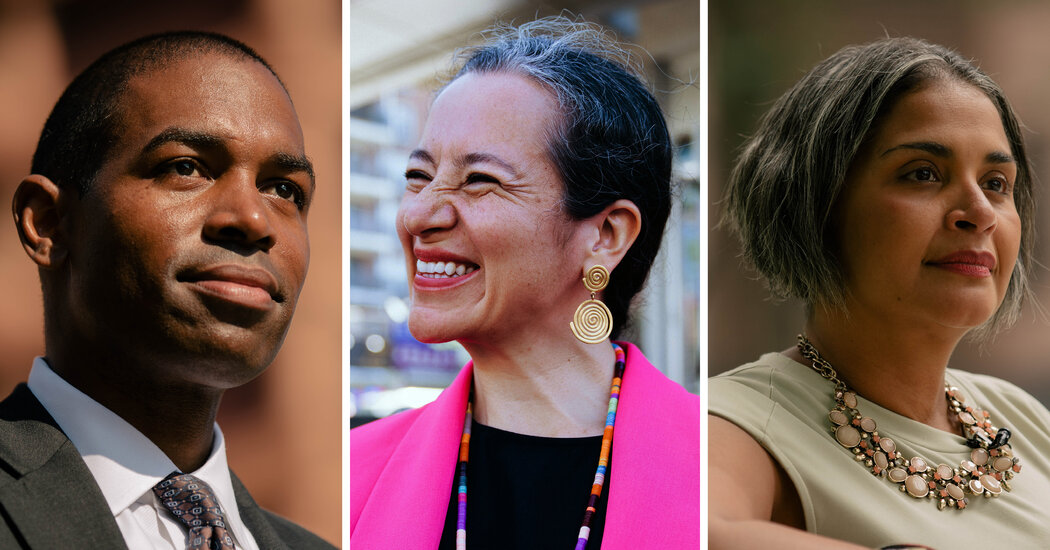 With a little more than a week until Primary Day in New York, the Democratic Party’s left wing is focused on a contentious statewide race shaped by issues of ideology, ethnicity and the influence of money and lobbying in Albany.

The contest is not for governor: The incumbent, Kathy Hochul, enjoys a huge advantage in fund-raising and in public polls over the party’s most left-leaning challenger, Jumaane Williams, the New York City public advocate.

But in Mr. Williams’s running mate, Ana María Archila, the left sees a legitimate opportunity to capture the lieutenant governor’s race and gain a foothold in the State Capitol.

Ms. Archila, a seasoned activist and first-time candidate backed by the Working Families Party, gained national attention when she confronted Senator Jeff Flake of Arizona in a Capitol Hill elevator during the hearings over the Supreme Court nomination of Brett Kavanaugh, who had been accused of sexual assault.

The viral moment, which she said was unplanned, led to her being invited by Representative Alexandria Ocasio-Cortez as her guest to the State of the Union address in 2019.

Now Ms. Archila is hoping to make her influence felt in Albany.

The race for lieutenant governor has set off competing visions for the role of an office with few statutory duties, but which has nonetheless served as a familiar steppingstone for higher office: Two of the last three governors, including Ms. Hochul, ascended from lieutenant governor after their predecessors resigned amid scandal.

Indeed, during a televised debate on Wednesday, Ms. Archila vowed to use the office of lieutenant governor — typically a ceremonial role with little power beyond presiding over the State Senate and being next in line to succeed the governor — as an independent bully pulpit that could serve as a counterweight to the governor’s office.

“I will not be a lieutenant governor who’s quietly in the background, smiling and cutting ribbons,” Ms. Archila said, an apparent nod to Ms. Hochul, who was largely sidelined by the Cuomo administration when she held the post.

Ms. Archila stressed that the office was an elected position and should therefore not be deferential to the governor, saying that she would “stand up to the governor when he or she is veering away” from helping working people.

The contest for lieutenant governor was thrown into turmoil in April, after former Lt. Gov. Brian Benjamin resigned after he was arrested on federal bribery charges.

Ms. Hochul successfully pushed legislation to remove Mr. Benjamin’s name from the ballot and chose Antonio Delgado, then a congressman representing the Hudson Valley, as her new lieutenant governor and running mate.

Despite his last-minute entry, Mr. Delgado entered the Democratic primary with the backing of Ms. Hochul’s campaign apparatus and support from the party establishment and key labor unions, as well as a sizable war chest he has swiftly deployed to flood the airwaves with television ads.

During Wednesday’s debate, Mr. Delgado said he was chosen by Ms. Hochul as her second-in-command because of his record in Congress and to be an “active partner.”

There is much at stake for Ms. Hochul: While the candidates for governor and lieutenant governor run on the same ticket in the general election, they run separately in the June 28 primary.

If Mr. Delgado were to lose, Ms. Hochul, who is favored to prevail in the Democratic primary, could potentially be forced to run with a lieutenant governor candidate not of her choosing in November. And if Ms. Archila were to win, Republicans would likely seek to link her left-wing credentials to Ms. Hochul, a more moderate Democrat.

The race, which features three Latino candidates, could also mark a momentous milestone for Latinos eager to elevate one of their own to statewide office in New York for the first time, following a dearth in representation despite Latinos accounting for about one-fifth of the state’s population.

Mr. Delgado, 45, identifies as Afro-Latino, though Latino leaders have questioned his heritage, while Ms. Archila, 43, was born and raised in Colombia. The third candidate, Diana Reyna, 48, became the first Dominican American woman elected to public office in the state when she represented parts of Brooklyn and Queens in the City Council.

“When Latinos are not present at the table, our issues are not hyper-localized,” Ms. Reyna, who also served as Mayor Eric Adams’s deputy when he was borough president of Brooklyn, said in an interview this week.

“We don’t represent communities of wealth, we represent the poor, the working class, the single family home that people want to keep and pass down to their children.”

Both Ms. Archila and Ms. Reyna face an uphill climb to unseat Mr. Delgado, a moderate Democrat from Schenectady who was the first person of color elected to Congress in upstate New York after flipping a Republican-held House seat in 2018.

For one, he has a significant fund-raising edge: Relying on money transferred from his congressional campaign account, he had about $2 million as of May, more than six times the amount that his challengers had combined. Mr. Delgado has so far spent over $4 million on television and digital ads since he was appointed lieutenant governor, according to AdImpact, a firm that tracks television ad spending.

He has run the ads — which highlight his résumé as a Rhodes Scholar, a Harvard Law School graduate and brief career as a rap artist — while skipping most candidate debates and forums, avoiding potential scrutiny, much to the chagrin of his opponents.

Mr. Delgado said he has been busy settling into office, but that he has also been “on the ground connecting with people” at subway stations and with small business owners and clergy members.

He has also received outside help from a super PAC funded by the billionaire founder of a cryptocurrency exchange platform that has spent about $1 million in ads supporting him. He insisted during the Wednesday debate that his decision-making would not be influenced by outside money, saying that he did not “know who this crypto billionaire is.”

The party’s progressive-activist wing is seeking to build on its partial success from 2018, when Mr. Williams, the New York City public advocate, mounted an insurgent campaign for lieutenant governor and came within six percentage points of defeating Ms. Hochul, beating her in Manhattan and Brooklyn in the Democratic primary.

Indeed, Ms. Archila’s campaign is hoping to perform strongly among Latino voters and left-leaning white liberals from New York City, as well as those in progressive hotbeds along the Hudson River and the Capital Region. But Mr. Delgado, who is a more familiar face in the Hudson Valley, could potentially pick away at that wall of support and splinter the Latino vote, while attracting many Black voters, according to political analysts.

Strapped for money, Ms. Archila has run a vigorous low-budget campaign grounded on the organizing tactics from her decades-long work as an activist. She has joined unionizing Starbucks workers in Queens; protested alongside activists in the State Capitol; and pulled off publicity stunts, such as showing up at Mr. Delgado’s office in Albany after he refused to participate in a debate.

Ms. Archila has spearheaded efforts to organize immigrant communities, most notably through Make the Road New York, a grass-roots organization she co-founded in 2007 that is supporting her campaign.

She was taking a break from political organizing earlier this year when the Working Families Party — a progressive third party — asked her in February if she would run for lieutenant governor alongside Mr. Williams, their candidate for governor. Together, the two have proposed far-reaching plans to build affordable housing, enact universal health care and allocate $3 billion in cash payments to immigrant workers who did not qualify for pandemic relief.

“New York State is such a rich state,” Ms. Archila said over bubble tea in Flushing, Queens, last week after receiving an endorsement from State Senator John Liu. “Our problem is never that we lack resources, our problem is that we prioritize the interests of those who have already so much and who are able to use their leverage, their money to influence our policies.”

Her campaign appeared to gain some steam following Mr. Benjamin’s arrest, as a group of city and state lawmakers, as well as Representatives Nydia Velázquez and Jamaal Bowman, endorsed her candidacy. As for a possible endorsement from Ms. Ocasio-Cortez: “We’re working on it,” Ms. Archila said.

It remains unclear if those endorsements will translate into more votes, especially in a contest that seldom engages voters.

During Mr. Liu’s endorsement outside a public library in Flushing, some curious commuters briefly stopped to listen to Ms. Archila as she spoke, her aide holding an iPhone to livestream the event to the two people watching remotely.

Maria Estrada, 72, a Bolivian immigrant and registered Democrat, stopped to pick up campaign literature. A frequent voter, she said her largest concerns were helping house people who were homeless.

Asked who she would vote for in the race for lieutenant governor, she said:

“I don’t know. Whoever is Hispanic.”