In Oregon, Adidas and Puma Take Over University Frats for World Championships 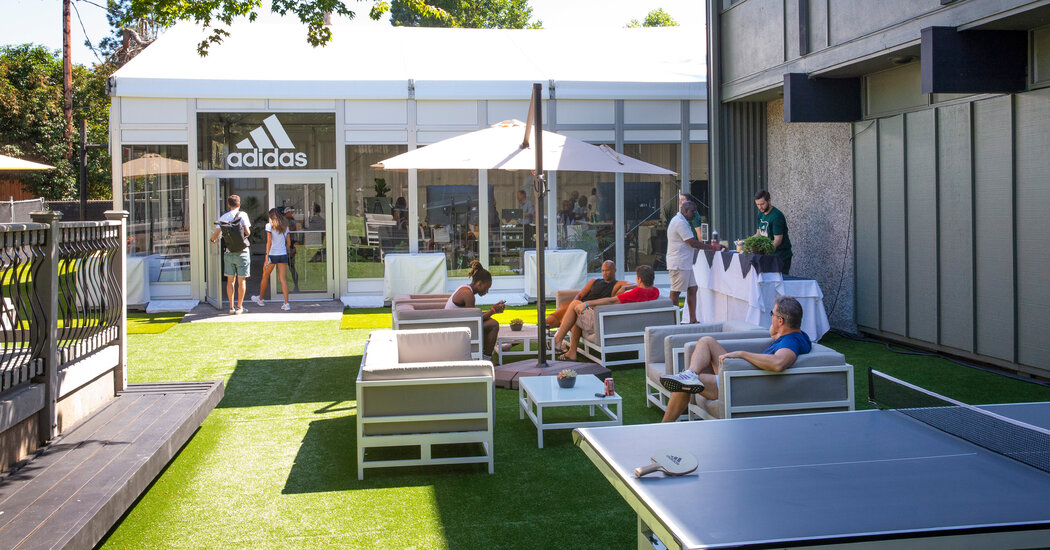 “It started a little rough; I’m not going to lie,” Scott Trempe, 50, the longtime chef at Sigma Chi, said. “It was definitely the boys against the contractors there for a while. Once the boys finally surrendered to what was going on, it worked out great.”

For a big event such as the track and field world championships, which are being held this month in Eugene, Ore., sneaker and apparel companies would ordinarily book a block of rooms at an upscale hotel to house staff and lease event space to entertain athletes and clients.

But Eugene is not a bustling metropolis with an abundance of lodging options like the host cities of years past. This is not Berlin, Beijing or Doha, Qatar. It is a quaint college town of 170,000, forcing companies to scramble for available hotel rooms. Others rented modest homes near campus, turning them into their operational headquarters for the meet.

Adidas and Puma tried something different: They moved into frat houses.

At the Chi Psi lodge, a few blocks from Hayward Field, Puma has made itself at home, transforming a stately 85-year-old fraternity house into “Puma House,” replete with a canal-side bistro, revamped basketball court, game room and 25 freshly painted bedrooms that feature Puma-themed bedspreads.

“It was a jigsaw puzzle,” said Menno Snel, an event manager for International Orange, the agency that worked with Puma on the project. “This was not your regular event in Paris, where every resource was available to you.”

At Sigma Chi, there is new furniture, a dedicated room for physiotherapy, a back office for product distribution, an ice cream bar and a cafe that, on a recent afternoon, was serving watermelon gazpacho from stemless glassware. (Good luck finding a keg.) Erriyon Knighton, an 18-year-old American sprinter who won a bronze medal in the 200 meters on Thursday, was chilling on a couch in the courtyard. Several other Adidas-sponsored athletes were engaged in a game of foosball.

Ethan Cupper, a junior advertising major and Sigma Chi’s president, recalled the day last winter when he heard that someone wanted to do a bunch of work on the place in exchange for a two-week stay in the middle of July.

“Wait,” he said, “the Adidas corporation wants to live in our fraternity house?”

In recent years, Adidas had used Sigma Chi as a hospitality center for various high-profile meets at Hayward Field. Before those meets, the company would spruce things up — a touch of paint here, a dab of plaster there. But the work was minor, and visitors never ventured upstairs to the living quarters.

For the world championships, Adidas spent months planning — and then executing — a massive makeover of the sprawling building that was worthy of its own time slot on HGTV.

“We took what we would have spent on hotel rooms and used it on this instead,” Spencer Nel, the head of global sports marketing for Adidas running, said as he gestured at the relative opulence around him. “And that’s what made it so attractive, because we’re going to be leaving something behind.”

Work at Sigma Chi began at the end of March, around the start of the spring term.

“There were definitely some things that needed repairs,” Cupper said, “like holes in the walls.”

While the improvements were much appreciated — “It seemed like every week we would wake up and there was something new going on in the house,” Cupper said — the fraternity brothers endured an occasional pang of nostalgia. One day, they watched as the construction crew went into the backyard to remove several strips of artificial turf that the students had purchased on Craigslist and installed themselves.

“That was all our hard work right there,” Cupper said. “But the new turf looks really nice.”

The long process of refurbishing the fraternity’s 40 bedrooms began while school was still in session, Nel said, which turned it into a game of chess. Workers started with a few that were vacant. Once those were repaired, a batch of brothers moved into them so that their bedrooms could be fixed up.

By the end of the school year, several of those revamped bedrooms were already in varying states of decay. (One resident — and you know who you are — left a fire extinguisher embedded in one of the walls as if it had been launched like a javelin.)

Adidas removed any and all foreign objects, replaced the bedroom doors, assembled new beds and modernized the bathrooms. The Wi-Fi network was also overhauled, which was a huge perk for the students and one of the reasons they were willing to put up with so much hassle this spring.

“Some of them are big gamers, and they were stealing each other’s megabytes,” said Sander Rodenburg, an executive with CIP Marketing, which managed the project.

But there are reminders that it is still Sigma Chi and not the Four Seasons. For starters, Sigma Chi does not have central air. Adidas had hoped to remedy the situation with a fleet of air-conditioning units, but the building’s electrical circuitry could accommodate only nine of them. For the track meet, the rooms with air conditioning went to the bigwigs. Everyone else has made do with fans on days when temperatures exceeded 90 degrees.

Neighbors, meanwhile, are enamored with the fresh coat of dark green paint on the building’s exterior.

“They’ve actually come by to thank us,” Danny Lopez, a senior manager for sports marketing at Adidas, said.

Over at Chi Psi, Snel arrived this month as several fraternity brothers were in the process of moving out.

Puma chose Chi Psi in large part, Snel said, because it was in great shape, having already undergone recent renovations. But the project still required months of planning. Chi Psi handed over the keys on July 10, giving Snel and a 20-person crew five days to get it ready before the start of the world championships.

One of the more rigorous parts of the process, Snel said, was a “deep clean” of the house that took nearly three days. It was a scramble toward the end, with caterers, movers and sound technicians bustling about. The house needed to be ready to accommodate about 33 guests — Puma staff, coaches, agents and family members — plus 2,500 Puma-branded ice cream treats that were delivered overnight from Los Angeles.

At the same time, Puma sought to avoid erasing Chi Psi from the house. So dozens of annual fraternity composite portraits remained in place, lining the walls. The parents of the Norwegian hurdler Karsten Warholm stayed in a bedroom down the hall from the framed composite for the Class of 2015-16, which prominently features a handsome pup named Kaleo that was in charge of “sorority relations.”

“I think that’s the beauty of it,” Snel said. “We tried to build on the story of the fraternity house and not completely turn it into some sort of sports brand activation.”

As part of its deal with Puma, the fraternity will get to keep most of the new furniture while taking advantage of the refurbishments. Herbst, who graduated this spring, said he was envious of the basketball court.

But some of the changes are most likely temporary. For the world championships, the upstairs bathroom at Chi Psi is now coed, with female-only hours and urinals that are brimming with flowers.