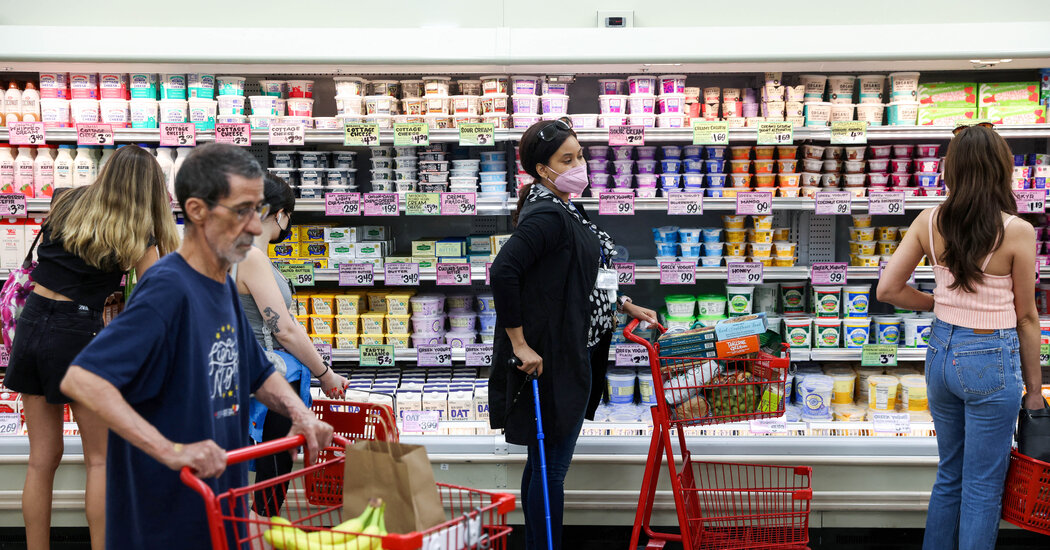 As prices have increased faster than at any other point in four decades, lawmakers have scrambled for explanations. In recent months, some Democrats have landed on a new culprit: price gouging.

The idea is that big companies have seized on inflation to jack up prices more than necessary. The White House has backed the claim, and congressional Democrats have introduced bills that target price gouging. Proponents of the theory have a catchy term for it: “greedflation.”

For Democrats, it is a convenient explanation as inflation turns voters against President Biden. It lets Democrats deflect blame from their pandemic relief bill, the American Rescue Plan, which experts say helped increase prices. And it lets them recast inflation as the fault of monopolistic corporations — which progressives have long railed against.

Not all progressives are on board. Jason Furman, an economist who served under Barack Obama, told me that greed was not an important factor in the rise of inflation. He described the focus on price gouging as a distraction from the real causes and solutions.

But the White House and other lawmakers are taking the theory seriously. So in today’s newsletter, I want to look at the arguments for and against the idea that greedflation is driving higher prices.

This is how the greedflation camp sees it: Inflation first rose because of other factors, like Covid and economic stimulus bills. But companies raised prices more than necessary to net higher profits. They knew they could get away with it because consumers no longer had a benchmark for what prices should be. And they did not face enough competition to keep prices down.

Proponents of the theory do not claim that companies have suddenly become much greedier or monopolistic. For decades, corporate profits have risen faster than economic growth, and major parts of the economy, such as retail and finance, have become more concentrated in the hands of a few.

But inflation gives greedy, monopolistic companies a chance to take advantage, said Lindsay Owens, the executive director of the left-leaning Groundwork Collaborative. Profiteering “is an accelerant of price increases,” she told me. “It is not the primary cause.”

Owens pointed to what companies have said in earnings calls over the past year. A Tyson Foods executive claimed that price increases for beef covered not just inflation but “more than offset” higher costs. Visa’s C.E.O. said, “Historically, inflation has been positive for us.” Owens’s organization compiled a list of similar comments from other corporations.

Representatives for Tyson and Visa said Groundwork mischaracterized the executives’ comments and took them out of context.

At the very least, many corporations have not taken a large hit from inflation. Profit margins across more than 2,000 publicly traded companies last year “rose well above the prepandemic average,” a Times analysis found.

You do not need price gouging to explain inflation, and there are other, more widely accepted explanations, Furman said.

Covid disrupted supply chains globally. Russia’s invasion of Ukraine caused another wave of disruptions, particularly in food and energy. The stimulus bills left people with a lot of extra cash, and many Americans spent it. That prompted too much demand for too little supply, so prices increased.

More recent developments have also weakened the greedflation theory. Inflation has remained high: 8.6 percent over the past year, according to a federal report released last week. But the stock market has plummeted; the S&P 500 was more than 20 percent below its January peak after a sharp drop yesterday. And earnings calls have disappointed investors so far this year. If the pursuit of profits were driving more inflation, you would not expect to see that.

The economic indicators offer a test going forward: If profits fall as inflation remains high, then gouging probably is not a major cause of rising prices.

The greedflation theory also hinges on large companies leveraging their outsize market power to raise prices more than what should be possible in a truly competitive economy. But in some concentrated markets, that has not happened: Hospitals are highly consolidated, yet health care prices have risen more slowly than overall inflation over the past year.

Health care prices are historically unusual; for most of the past few decades, they have risen more quickly than inflation. But their recent relative slowdown suggests that if greedflation is real, it is not a major factor across every part of the economy.

My read of the evidence: Price gouging could be driving higher prices in some places, but it is not universal.

It is also not clear what progressives’ argument amounts to. The anti-gouging bills introduced in Congress have been criticized as impractical or even counterproductive. More antitrust enforcement — to break up or prevent the creation of monopolistic companies — could help, but only over the longer term. If greedflation explains some of our current problems, it does not offer a clear way out.

More on the economy

This weekend, when Jennifer Hudson received a Tony for the musical “A Strange Loop,” she became one of 17 people who have won an Emmy, a Grammy, an Oscar and a Tony. Or, as it is known, an EGOT.

The actor Philip Michael Thomas, who played Detective Rico Tubbs on “Miami Vice,” first used the term in the 1980s, and it entered the mainstream after “30 Rock” popularized it in 2009.

Whoopi Goldberg: The actor reached EGOT status in 2002 after winning a Tony for the musical “Thoroughly Modern Millie” and an Emmy for hosting “Beyond Tara: The Extraordinary Life of Hattie McDaniel.”

John Legend, Andrew Lloyd Webber and Tim Rice: The artists all joined the club in 2018 thanks to NBC’s “Jesus Christ Superstar Live in Concert.”

Who’s next? Multiple celebrities are just one award away. Among them: Lin-Manuel Miranda, who is missing an Oscar; Cher, who has all except for a Tony; Elton John, who doesn’t have an Emmy; and Viola Davis, who is without a Grammy.