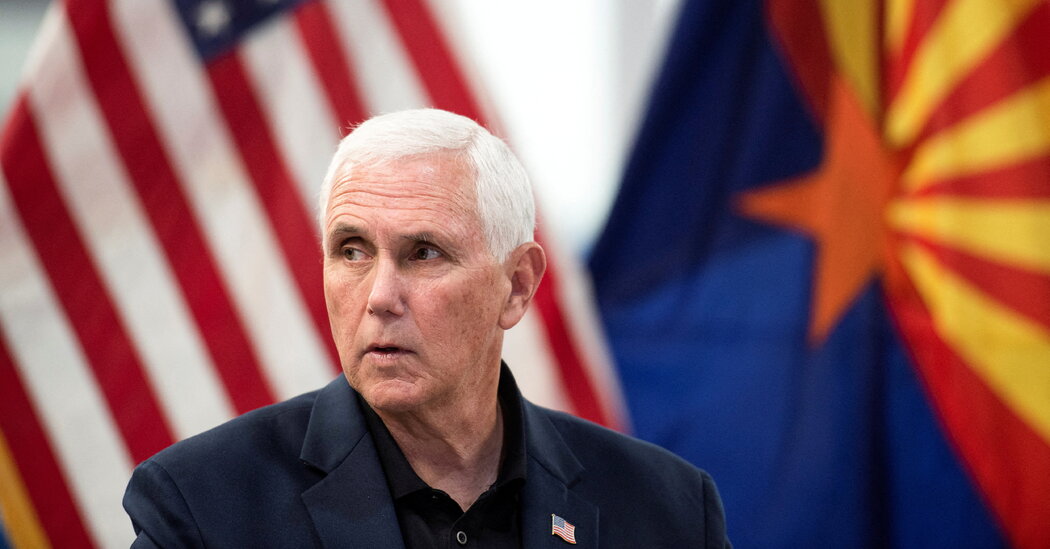 WASHINGTON — The House committee investigating the Jan. 6 attack on the Capitol plans on Thursday to present new details of the intense pressure campaign President Donald J. Trump and the conservative lawyer John Eastman waged against Vice President Mike Pence, which the panel says directly contributed to the violent siege of Congress.

The public hearing, the panel’s third this month as it lays out the steps Mr. Trump took to try to overturn the 2020 election, is scheduled for 1 p.m. The committee plans to release materials detailing the threats of violence against Mr. Pence, and the ways the vice president’s security team scrambled to try to keep him safe from the mob.

The hearing is set to feature testimony from J. Michael Luttig, a conservative former judge who advised Mr. Pence that Mr. Trump’s push for the vice president to unilaterally decide to invalidate election results was unconstitutional, and that he should not go along with the plan.

Also scheduled to appear is Greg Jacob, Mr. Pence’s top White House lawyer, who has provided the committee with crucial evidence about the role played by Mr. Eastman, who wrote a memo that members of both parties have described as a blueprint for a coup.

Representative Pete Aguilar, Democrat of California and a member of the panel, is expected to lead a presentation of the evidence. A committee senior investigative counsel, John Wood, whom President George W. Bush hired as U.S. attorney for the Western District of Missouri, is expected to conduct some of the questioning of witnesses.

The committee is also expected to play video from an interview it recorded with Mr. Pence’s chief of staff, Marc Short. A day before the mob violence, Mr. Short grew so concerned about Mr. Trump’s actions that he presented a warning to a Secret Service agent: The president was going to publicly turn against the vice president, and there could be a security risk to Mr. Pence because of it.

Review the Themes of the Jan. 6 House Committee Hearings

The panel has never heard from Mr. Pence himself, and at one point considered issuing a subpoena to obtain his testimony.

But the committee’s chairman, Representative Bennie Thompson, Democrat of Mississippi, said it ruled out a subpoena for Mr. Pence after receiving “significant information” from two of his top aides: Mr. Short and Mr. Jacob.

In a speech in February, Mr. Pence offered up a rebuke of Mr. Trump, saying that the former president had been mistaken in asserting that Mr. Pence had the legal authority to change the results of the election and that the Republican Party must accept the outcome and look toward the future.

“President Trump is wrong,” Mr. Pence said in remarks before the Federalist Society, a conservative legal organization. “I had no right to overturn the election.”

The Jan. 6 committee has been presenting the televised hearings as a series of movie-length chapters laying out the different ways Mr. Trump tried to cling to power. After an initial prime-time hearing that drew more than 20 million viewers, in which the panel sought to establish that the former president was at the center of the plot, investigators focused their second hearing on how Mr. Trump spread the lie of a stolen election.

Future hearings are expected to focus on how Mr. Trump and his allies pressured state officials to overturn the election; attempted to interfere with the Justice Department; created slates of pro-Trump electors in states won by Joseph R. Biden Jr.; and amassed a mob that marched on the Capitol, while the president did nothing to stop the violence for 187 minutes.

The committee is expected to detail on Thursday some of its findings about the plot involving pro-Trump electors. The panel will present evidence that the White House counsel also concluded that the vice president had no legal power to throw out legitimate electoral votes for the fake electors Mr. Trump’s team put forward.

Investigators will show how Mr. Trump was advised that his plans were unlawful but he pressed forward with them anyway, committee aides said.

A federal judge has already concluded in a civil case that Mr. Trump and Mr. Eastman “more likely than not” had committed two felonies in their attempts to overturn the election.

The panel also plans to demonstrate that the threat to American democracy is ongoing, committee aides said.

To build public anticipation, the committee has begun releasing teaser clips to preview its hearings. On Tuesday, the panel released a clip of Eric Herschmann, a White House lawyer, telling Mr. Eastman the day after the Capitol riot that he believed Mr. Eastman had committed a crime.

“I’m going to give you the best free legal advice you’re ever getting in your life,” Mr. Herschmann recalls telling Mr. Eastman before recommending that he find a criminal defense lawyer, and adding, “You’re going to need it.”

Mr. Jacob has provided the committee with important evidence about Mr. Eastman’s role in the events that led to the attack on the Capitol.

Mr. Eastman conceded during an email exchange with Mr. Jacob that his plan to overturn the election was in “violation” of federal law.

As the mob attacked the Capitol on Jan. 6 — some of its members chanting “Hang Mike Pence!” — Mr. Jacob sent an email to Mr. Eastman blaming him for the violence.

“It was gravely, gravely irresponsible for you to entice the president with an academic theory that had no legal viability,” Mr. Jacob wrote in a subsequent email to Mr. Eastman.

The committee could also hear testimony about Mr. Trump’s state of mind during the violence.

Representative Liz Cheney, Republican of Wyoming and the vice chairwoman of the committee, said last week that the panel had received testimony that when Mr. Trump learned of the mob’s threats to hang Mr. Pence, he said, “Maybe our supporters have the right idea,” and added that Mr. Pence “deserves it.”

The committee has scheduled two more hearings, for June 21 and June 23, at 1 p.m.