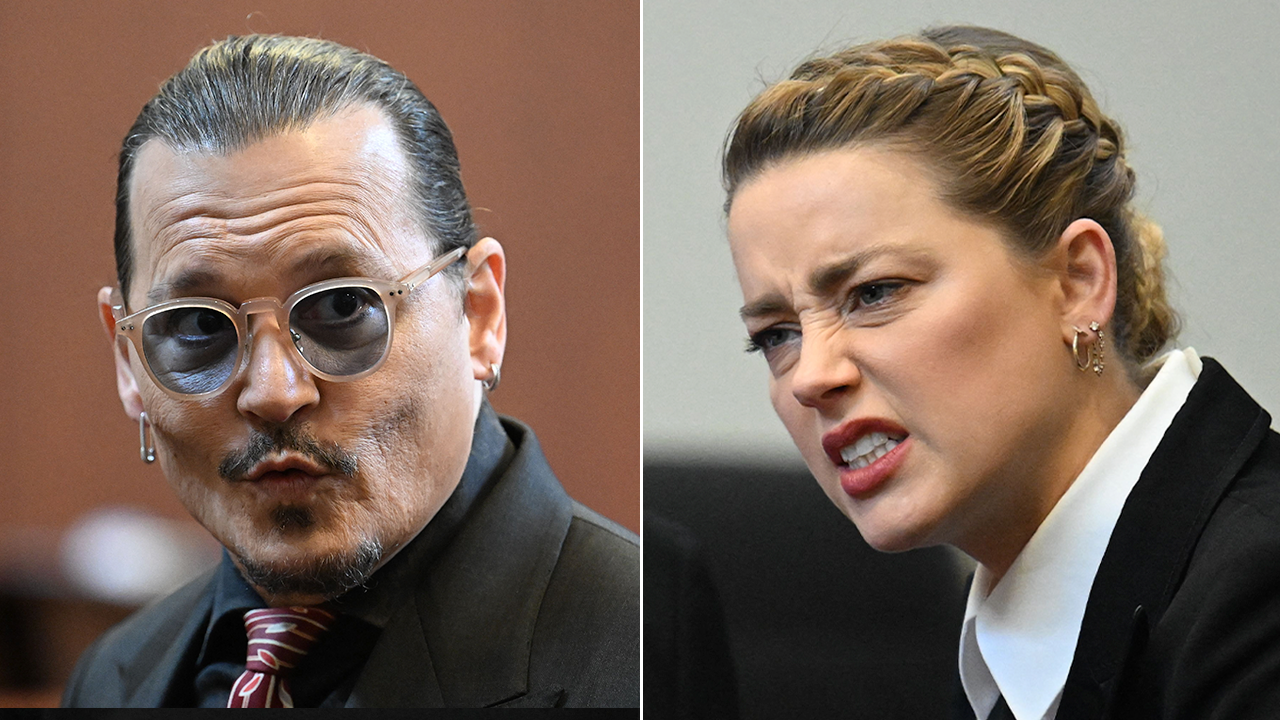 The “Pirates of the Caribbean” star has a trial scheduled in Los Angeles in July for allegedly slugging a staffer on the set of “City of Lies” — and the actor may testify in his own defense, according to court papers.

The jury found in favor of Depp on all his claims and awarded him $10.35 million, rejecting Heard’s allegations that he had physically and sexually abused her.

A photo combination of Johnny Depp and Amber Heard at his defamation trial against her in Fairfax, Virginia
(Evelyn Hockstein/Pool via AP)

The panel awarded the “Aquaman” actress $2 million in her countersuit, finding that a single statement that Depp’s attorney, Adam Waldman, made to the press was libelous.

The upcoming civil trial in Los Angeles Superior Court is slated for July 25 and stems from Gregg “Rocky” Brooks’ July 2018 lawsuit against Depp, accusing the actor of flying into a rage and punching him twice on the left side of his rib cage in front of the crew.

A witness list identifies a familiar cast of characters – Depp, his sister Christi Debrowski, his bodyguard Sean Bett, Waldman and business manager Ed White — all of whom testified at the defamation trial in Fairfax, Virginia.

The altercation with Brooks occurred in April 2017 after Depp was told the crew had to stop filming a scene by 11 p.m. due to permit restrictions. Brooks, as location manager, was tasked with ensuring production shut down at the appropriate time.

The complaint alleges that Depp went ballistic and berated Brooks, screaming in his face, “Who the f—k are you? You have no right to tell me what to do!”

Brooks said he calmly tried to explain the permit issue but to no avail, according to the filing. “I don’t give a f—k who you are, and you can’t tell me what to do!” Depp allegedly railed before striking the location manager.

The “Black Mass” actor allegedly told Brooks he’d give him $100,000 if he hit him in the face, according to the suit. Brooks refused and Depp’s security guard allegedly pulled the actor away.

Brooks said the movie was severely over budget and the atmosphere on set was “toxic” and strained.

In the film, Depp plays a retired LAPD detective investigating the deaths of rappers Tupac Shakur and The Notorious B.I.G.

ELON MUSK WEIGHS IN ON DEPP-HEARD TRIAL: ‘I HOPE THEY BOTH MOVE ON’

The Monday following the alleged battery, Brooks said he was terminated after he declined to sign a document stating he wouldn’t sue the production company. He also accused Depp of blackballing him from the industry.

Depp’s attorney, Camille Vasquez, who acquired her own fan base after her vicious cross-examination of Heard, may return to the courtroom to defend the actor in the civil trial. She’s listed as his lawyer in the case, as is her colleague Ben Chew.

Johnny Deep during the photocall for his film “Crock of Gold: A Few Rounds with Shane Macgoman” at the 68th San Sebastian Film Festival, in San Sebastian, northern Spain.
(AP)

During a deposition, Depp admitted he chastised Brooks for allegedly shouting at an elderly homeless woman who got in his way on the shoot outside the Barclays Hotel in Los Angeles but denied ever hitting him.

“His words to her were with great anger and bitterness and — you know, there was a lot of poison in it.,” Depp said of Brooks. “I don’t tolerate injustice.”

Brooks admitted that later that night he and Depp “bro-hugged it out,” then the actor posed for a selfie with him. The location manager posted the picture of the pair smiling to his Facebook page and only took it down after filing the suit, he said in a deposition.

Rebecca Rosenberg is a veteran journalist and book author with a focus on crime and criminal justice. Email tips to rebecca.rosenberg@fox.com and @ReRosenberg.