Just 5 Months Into His Term, Adams Is Busy Raising Money to Win Another 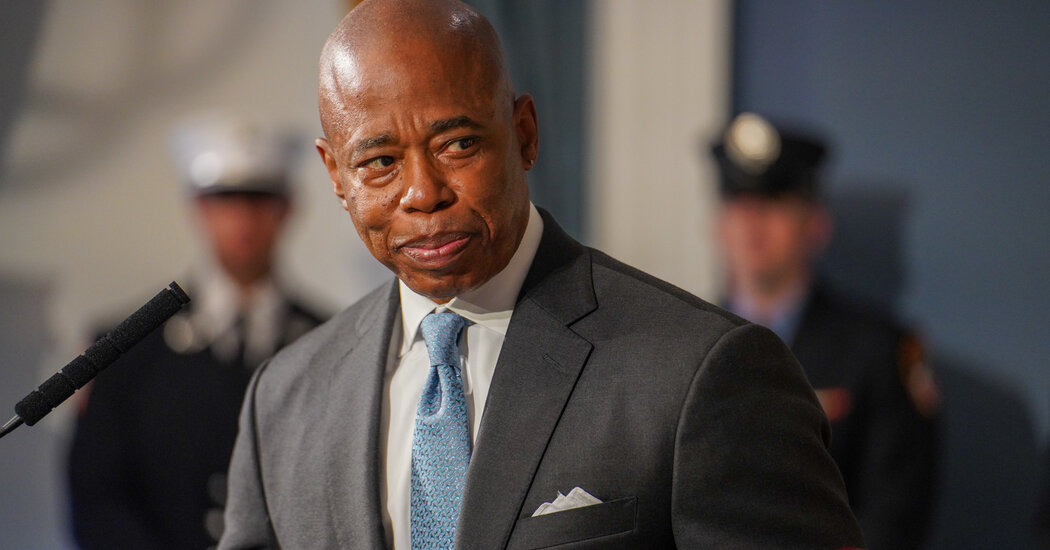 Not long after celebrating his first 100 days as mayor this spring, Eric Adams was poolside in Beverly Hills, Calif., already thinking about the future.

Wearing a crisp blue suit and fuchsia tie, Mr. Adams spoke to a crowd of vegan enthusiasts about his allegiance to a plant-based diet in an event at the midcentury home of Naren Shankar, a Hollywood showrunner and producer of “CSI: Crime Scene Investigation.”

The underlying motivation, however, was about another passion: raising money for his re-election campaign in 2025.

Even as Mr. Adams has struggled to address a series of pressing challenges in New York, he has launched an unusually early fund-raising blitz to secure a second term, a feat that no Black mayor of New York City has achieved.

The fund-raisers coincide with Mr. Adams’s efforts to establish a national profile. In March, the mayor held an event in Chicago at the home of Desirée Rogers, the former White House social secretary for President Barack Obama, which was attended by Robert Blackwell Jr., an entrepreneur and Obama ally.

Sometime this summer, Charles Phillips, the managing partner of Recognize, a technology investment firm, is planning to hold a fund-raiser for Mr. Adams — probably “out east,” in the Hamptons, he said in an interview.

The mayor’s team is hoping he will max out his fund-raising by the end of the summer, according to a Democratic consultant who was briefed on the campaign’s plans. A $2 million haul, coupled with the city’s generous matching funds program, could enable him to hit the $7.9 million spending cap for the 2025 mayoral primary. Collecting a huge war chest now could fend off potential competitors and capitalize on what remains of the mayor’s honeymoon period, when he is still relatively popular and donors are eager to get his attention.

“You want to raise money as a show of strength,” said Chris Coffey, a chief executive of Tusk Strategies and a manager of Andrew Yang’s campaign for mayor. “You don’t want to spend your last year running around doing fund-raisers.”

There is little precedent for such an early push. Bill de Blasio, in his first year as mayor, focused on raising money for candidates for the State Senate and for the Campaign for One New York, a nonprofit group that supported his agenda — both of which became part of federal and state investigations into his fund-raising. Michael R. Bloomberg did not have to bother with fund-raising; he used his own fortune to run for a second term, then wielded his personal philanthropy to gain support to overturn term limits in 2008, spending a record $102 million on a third term.

There are also political risks to Mr. Adams’s fund-raising strategy, which could potentially cast him as an absentee leader unduly focused on politics.

When the mayor was in Beverly Hills, the risk level for coronavirus cases had just increased in New York City, raising fresh concerns about the city’s economic recovery. Federal officials were weighing a takeover of the troubled Rikers Island jail in response to rising violence and inmate deaths there. A police officer was slashed in Brooklyn by a man carrying a 16-inch knife.

And when his return flight from California was abruptly canceled, Mr. Adams had to scrap most of his events for the day, including a rally at City Hall to put pressure on the State Legislature to extend mayoral control of city schools.

Mr. Adams has already seen his approval rating drop as he faces growing pressure to address rising crime and an affordable housing crisis. Only 29 percent of New Yorkers said his performance was good or excellent, and 56 percent said the city was headed in the wrong direction, according to a recent poll by NY1 and Siena College.

Mr. Adams defended his polling numbers, arguing that New Yorkers were tough graders and that many had given him a “fair” rating, which he considered a C grade.

The mayor has proved to be a prolific fund-raiser. He raised more than $9 million for the Democratic primary and the general election last year and another $10 million in matching funds. Mr. Adams spent much of last summer traveling to the Hamptons and Martha’s Vineyard to court wealthy donors who favored his brand of centrism, attending as many as five fund-raisers a day.

Mr. Adams, a former state senator and Brooklyn borough president, has at times tested the boundaries of campaign-finance and ethics laws. He was investigated for his role in backing a video lottery terminal bidder for the Aqueduct Racetrack and has been criticized for taking money from developers who were lobbying him to support crucial zoning changes.

As a mayoral candidate, Mr. Adams raised money from a wide array of donors, including real estate developers, billionaires, cannabis investors, hedge fund executives, Republicans and working-class New Yorkers. He raised more than $2.8 million from donors outside New York City, and a super PAC supporting his campaign raised about $7 million.

Now as mayor, Mr. Adams has again embraced fund-raising with vigor. On June 3, after delivering a commencement speech in Queens, Mr. Adams attended a fund-raiser at a construction company’s offices in Midtown Manhattan, hosted by the Bravo Group chief executive, Ehab Shehata. At the middle-of-the-workday event, Mr. Adams told the crowd that the city could only rebound if crime levels dropped and that he was the man for the job, according to a person who attended the event.

Mr. Shehata did not respond to requests for comment. But he is hardly the only local executive eager to curry favor with the mayor.

Marc Holliday, chief executive of SL Green Realty Corp., which co-owns the new One Vanderbilt skyscraper near Grand Central Terminal, reached out to fellow real estate executives in April on behalf of Mr. Adams’s 2025 campaign. The tower has been home to at least two mayoral appearances, including the Wells Fargo product launch in April where the mayor partied with the model and actress Cara Delevingne, earning himself a spread in the gossip pages.

“At a time when NYC needed it the most, Eric has stepped into the mayoralty and has quickly become the face and driving force behind New York’s recovery,” Mr. Holliday wrote in an email. “Anything you can do would be very much appreciated.”

The first public disclosures for the 2025 mayor’s race are due next month and will provide a clearer picture of the donors Mr. Adams is relying on.

Barry Gosin, the chief executive officer of Newmark Group, a commercial real estate firm, is hosting a fund-raiser for Mr. Adams on Wednesday on the fifth floor of a skyscraper near Grand Central Terminal. Attendees are requested to donate between $400 and $2,000 apiece.

“This is an opportunity to support a great, authentic mayor,” Mr. Gosin said. “He’s working his butt off, and I think the things he’s doing are the things that should be done. But that’s my opinion.”

The Chicago fund-raiser was attended by Mr. Blackwell, the leader of a table tennis company who donated $400 to Mr. Adams’s mayoral campaign last year. It was co-hosted by Ms. Rogers and Carol Adams, the former president of the DuSable Museum of African American History.

“To run for office, it takes money — expensive city, expensive ad market,” Mr. Phillips said. “And you have to tell your story before someone else does.”

Another fund-raiser in May at the Kimberly Hotel in Midtown Manhattan was attended by Taj Gibson, the New York Knicks forward, and Jean Shafiroff, a fixture on the charity circuit who attended a soiree for Mr. Adams in the Hamptons last summer.

“We have to give him a chance,” she said. “I like what he stands for. It’s really not fair to judge anyone after three months.”