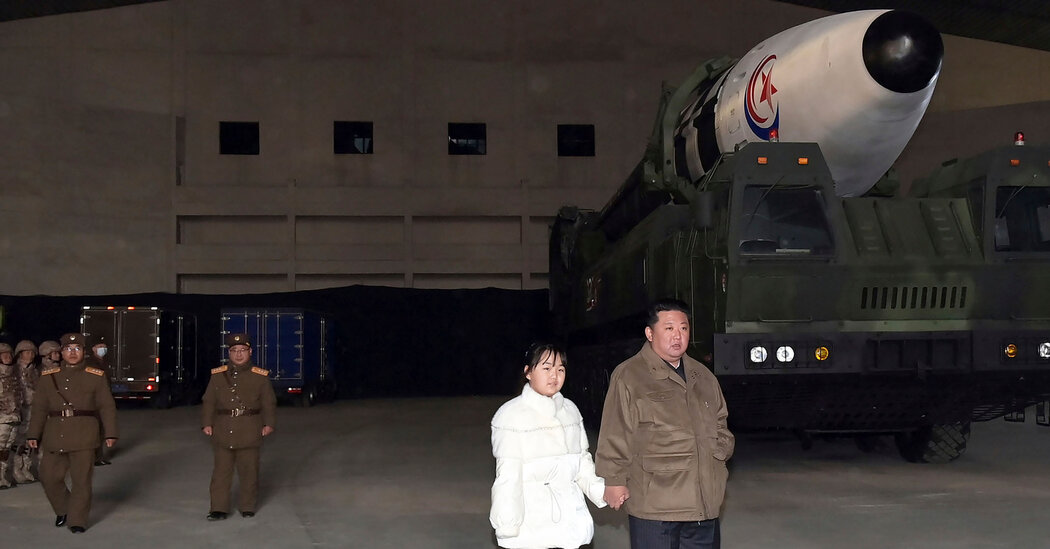 SEOUL — As North Korea fired its largest ballistic missile on Friday, the country’s leader, Kim Jong-un, appeared at the launch along with his wife, Ri Sol-ju, and a young girl who had never been publicly seen before.

A series of images from the state news agency showed the girl walking hand in hand with Mr. Kim, wearing a white puffer jacket, black pants and red dress shoes, with her hair in a ponytail.

She is Mr. Kim’s daughter, the North Korean state media confirmed. Mr. Kim attended the launch “with his beloved daughter and wife,” it said on Saturday. Photographs of her appeared on the second page of Rodong Sinmun, North Korea’s main state newspaper.

It was quite a day for Mr. Kim to reveal a daughter to the world — and to the North Korean people. The test was one of the most successful among the several intercontinental ballistic missile tests his country has conducted this year. State media called it a milestone in the strengthening of the country’s nuclear force. After the test, Mr. Kim reaffirmed his pledge to “react to nukes with nukes” and engage in “direct confrontation” against enemy threats.

Together, the pair watched as the missile was carried in a giant military truck to the launch site and then fired into the air.

Little is known about North Korea’s ruling family. No outsider has reported ever having seen any of the couple’s other children. But South Korean intelligence officials believe that Mr. Kim and Ms. Ri have had three children since their secretive marriage: a son, a daughter and a third child whose gender is unknown.

The North Korean state media did not reveal the name or the age of the girl in the photographs. But researchers scrutinizing North Korea say that her name is most likely Kim Ju-ae and that she is probably Mr. Kim’s second child.

North Korea had never previously disclosed the existence of Mr. Kim’s daughter, although Mr. Kim’s wife, Ms. Ri, was seen pregnant on the North’s state-run television in 2012. In 2013, the retired N.B.A. star Dennis Rodman said that he had met Mr. Kim’s daughter, then a baby, on a visit to Pyongyang. In an interview with The Guardian, Mr. Rodman said her name was Ju-ae, and that Mr. Kim had trusted him enough to let him hold her.

The decision by Mr. Kim to appear at the missile launch with his daughter appeared to be a way of indicating that his nuclear program was going to be a multigenerational effort. “They’re going to keep their nuclear forces for the long haul,” Ankit Panda, a nuclear expert at the Carnegie Endowment for International Peace, said in an interview. Mr. Kim has declared that he would never give up his nuclear weapons.

Mr. Kim’s own first appearance in the North Korean state media was in 2010, shortly after he had been designated the successor to his father, Kim Jong-il, who was ill at the time and died the following year. The photograph, published on the front page of Rodong Sinmun, showed him in a dark suit with his father and a large group of senior party officials.

The missile launched on Friday was the North’s newest and most powerful ICBM, South Korean defense officials said. It appeared to be a Hwasong-17, which North Korea unveiled in 2020 but has since had trouble launching. Friday’s test showed progress: Missile experts said it could theoretically reach anywhere in the United States.

North Korea said the missile launch was a reaction to the “reckless military confrontation by the United States and hostile forces” that it said was “driving the Korean Peninsula’s military and political situation to the edge of danger.”