Lee Zeldin’s would-be attacker ‘tackled’ by group of bystanders: ‘He had a blade on his hand’ 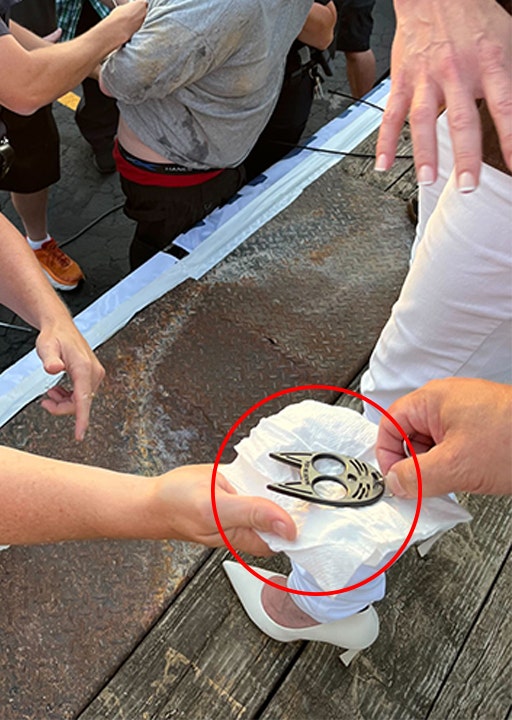 FIRST ON FOX: One of the men who took down the individual seen on video going after Rep. Lee Zeldin, R-N.Y., said the attacker “lunged” at the congressman and Republican gubernatorial candidate with a blade on his hand during a campaign stop in Perinton, New York on Thursday.

Joe Chenelly, the national director for AMVETS, spoke with Fox News Digital and said the alleged attacker came through the crowd about 15 minutes into Zeldin’s speech and was “stumbling” as he walked up to the stage, and that’s when a decision was made to confront him. When first seeing the alleged attacker approach the stage, Chenelly said he “wasn’t sure if he was coming up to hug the congressman or yell at him or argue with him.”

Chenelly said the Congressman was able to block the man from striking him with the blade.

“His right hand came up, I assume out of his pocket, and he had a blade on his hand. His fingers were like two finger holes in the blade and lunged at the congressman. And Congressman Zeldin blocked the first lunge. And then as he tried to lunge again, I grabbed him from behind and tackled him down to the ground and held him on the ground,” Chenelly said.

“…he had a blade on his hand. His fingers were like two finger holes in the blade and lunged at the congressman.”

He said that after he took the alleged attacker down, a number of other people came to help restrain the man, who Chenelly said still had a blade in his hands.

Once the blade was taken out of the alleged attacker’s hands and zip ties were used to restrain his arms, Chenelly said that Zeldin got back on the stage to finish the rally.

Chenelly said that the alleged attacker was “mostly incoherent” and “kind of yelling,” but it seemed like he was at the event “with intent to cause harm to the congressman.”

“He said that he was an Iraq veteran… and that really struck me,” Chenelly said. “And I know the mental health crisis that has really gripped the veteran’s community. I don’t want this to become some crazy veteran story, but it definitely struck me. And so, you know, while he was still standing there, I told him that he’s going to get through this. The situation he’s going to, you know, deal with what he’s done tonight. You know, once he’s done, I want him to reach out to me. We’ll make sure that you get the services that you need.”

The Monroe County Sheriff’s Office told Fox News that it is “aware of an incident at the speech of gubernatorial candidate Zeldin this evening. A suspect is in custody and Major Crimes is investigating.”

Zeldin’s campaign shared an image with Fox News Digital which appears to show the blade that was used by the alleged attacker while he was being restrained.

“Congressman Zeldin, Alison Esposito and all members of Team Zeldin are safe following tonight’s attack. Far more must be done to make New York safe again. This is very much getting out of hand in this state. Unfortunately, Congressman Zeldin is just the latest New Yorker whose life has been affected by the out of control crime and violence in New York. This needs to stop! Thankfully, we still have exceptional men and women in law enforcement answering the call to protect our streets,” Vincentz said.

Rep. Zeldin took to Twitter following the attack to thank those who stepped in to help take the would-be attacker down.

“Grateful for the attendees who stepped up quickly to assist and the law enforcement officers who quickly responded,” Zeldin wrote.

He added, “I’m as resolute as ever to do my part to make NY safe again.”