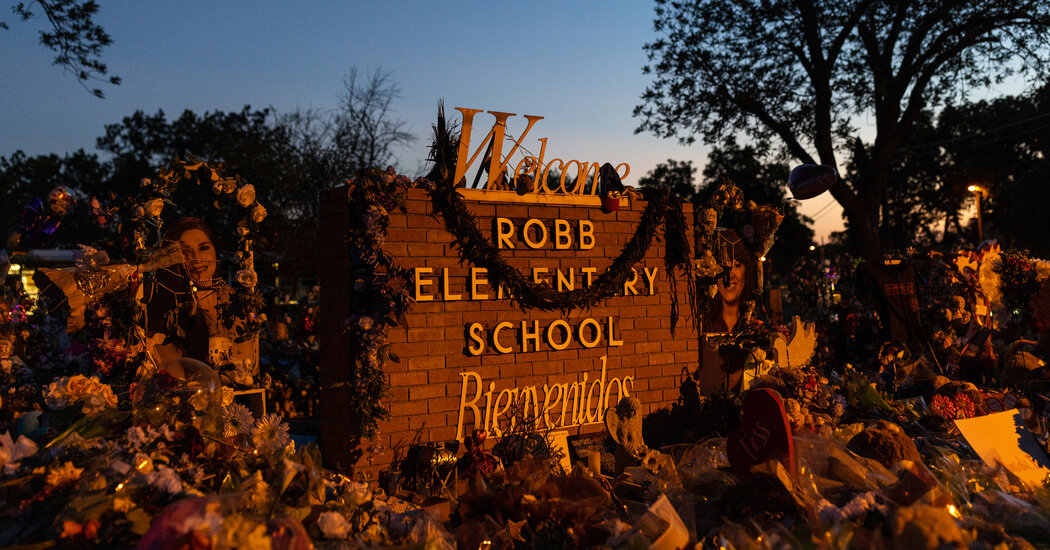 WASHINGTON — Kimberly Rubio, whose 10-year-old daughter Lexi was killed during the mass shooting at Robb Elementary School in Uvalde, Texas, pleaded with members of Congress on Wednesday to enact new gun control laws, using her own fresh pain to demand action.

“We seek a ban on assault rifles and high-capacity magazines,” Ms. Rubio said, her voice shaking after recounting the last time she saw her daughter and the panicked moments before she learned that Lexi was dead. “We understand for some reason, to some people — to people with money, to people who fund political campaigns — that guns are more important than children.”

“So at this moment, we ask for progress.”

Ms. Rubio’s emotional entreaty, delivered as her husband sat silently weeping beside her, came during a hearing on gun control legislation that is stalled on Capitol Hill amid Republican opposition, and as negotiators in the Senate grasp for a bipartisan deal that could break the stalemate.

Lexi’s parents were joined by Dr. Roy Guerrero, the sole pediatrician in the small town of Uvalde and an alumnus of Robb Elementary, who testified in tragically graphic detail about what the AR-15 used in the massacre had done to the bodies of fourth graders. Testifying in person on Capitol Hill, he railed against lawmakers who have failed to act in the face of a rising tide of gun violence in America.

“We’re bleeding out,” he told the committee, “and you are not there.”

Dr. Guerrero recalled seeing two children “whose bodies had been so pulverized by the bullets fired at them over and over again, whose flesh had been so ripped apart, that the only clue as to their identities were the blood-spattered cartoon clothes still clinging to them.”

Miah Cerrillo, a fourth-grader who survived the carnage at Robb by covering herself in a classmate’s blood and pretending to be dead, shared her ordeal in a prerecorded video, too traumatized to appear in person.

“He shot my friend that was next to me,” she said of the gunman who slaughtered 19 students and two teachers at her school, speaking quietly and with little evident emotion. “And I thought he would come back to the room.”

Miah’s father, who appeared at the hearing in person on his daughter’s behalf, left the hearing room in tears.

The emotional testimony unfolded hours before the House was scheduled to vote on a package of gun control measures, including legislation that would prohibit the sale of semiautomatic rifles to people under the age of 21 and ban the sale of magazines that hold more than 10 rounds of ammunition. The bills are all but certain to go nowhere in the evenly divided Senate, where solid Republican opposition means that they cannot draw the 60 votes needed to break through a filibuster.

The hope among Democrats was that the first-person stories from witnesses still processing the trauma of gun violence would underscore to the public and to lawmakers all that is at stake, increasing pressure on Republicans who oppose gun control measures to do something.

“No civilian needs an assault rifle, and the Second Amendment does not protect the right to own a weapon of war,” said Representative Carolyn Maloney, Democrat of New York and the chairman of the committee. “It’s time that we ban assault rifles from our streets and homes.”

Zeneta Everhart, whose son Zaire was injured during the racist gun attack in Buffalo, N.Y., 10 days before the Uvalde tragedy, said lawmakers who continued to do nothing in the face of mass shootings should be voted out of office.

“Let me paint a picture for you: My son Zaire has a hole in the right side of his neck, two on his back and another on his left leg, caused by an exploding bullet from an AR-15,” she said. “I want you to picture that exact scenario for one of your children. This should not be your story or mine.”

But the second half of the hearing, during which lawmakers questioned expert witnesses, appeared disconnected from the wrenching testimonials delivered by grieving parents and mass shooting survivors.

The Republicans in the room appeared unmoved by the testimonials and demands for action, retreating to their political corners, where they reiterated their previously held positions on guns.

“Evil deeds do not transcend constitutional rights,” says Representative Andrew Clyde, Republican of Georgia, arguing that gun-free school zone signs were part of the problem and that the solution was hardening schools.

Representative James Comer of Kentucky, the panel’s top Republican, warned in an opening statement that “knee-jerk reactions,” such as proposals for stronger gun laws, in the face of gun violence were not the answer. Instead, he said the problem was those who are soft on crime and support defunding the police.