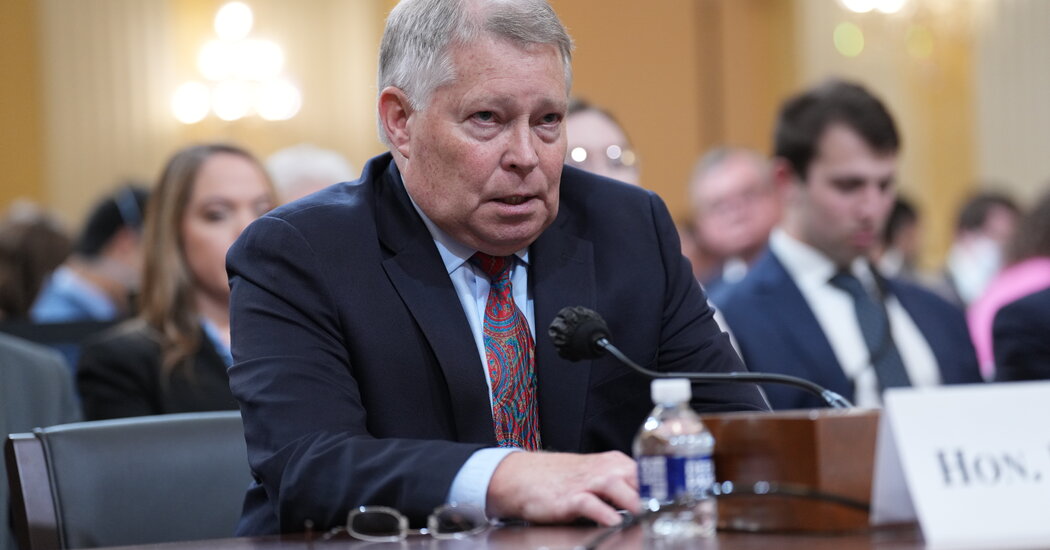 John C. Eastman, the lawyer who was advising President Donald J. Trump on efforts to block congressional certification of his 2020 election defeat, disputed on Thursday that he had had any meaningful discussions with Virginia Thomas or her husband, Justice Clarence Thomas, about issues likely to come before the Supreme Court.

In a Substack post, Mr. Eastman also said he had no inside information about what was going on inside the court, despite suggesting in an email to a group of other lawyers that he did.

Mr. Eastman was responding to reports in The Washington Post and The New York Times on Wednesday that the House committee investigating Jan. 6 had obtained email traffic between Mr. Eastman and Ms. Thomas.

Mr. Eastman has become a pivotal figure in the ongoing hearings by the House committee, since his legal advice to Mr. Trump after the election was central to Mr. Trump’s efforts to reverse the outcome. Mr. Eastman is a former clerk of Justice Thomas and a friend of the Thomases, and in January 2021 reached out to other former Thomas clerks about his legal work on Mr. Trump’s behalf on an online network used by Ms. Thomas and the clerks.

Ms. Thomas is an outspoken Republican activist and Trump supporter who pressed Mr. Trump’s chief of staff, Mark Meadows, and lawmakers in Arizona to take steps to overturn the election of Joseph R. Biden Jr.

On Thursday, Mr. Eastman released a copy of what he said was the email in question, in which Ms. Thomas asked him in December 2020 to provide “a status update to a group of grass-roots state leaders” with which she was affiliated.

“She invited me to give an update about election litigation to a group she met with periodically,” he wrote.

He also said that an email he wrote a few weeks later to other lawyers advising Mr. Trump, in which he said “I understand that there is a heated fight underway” within the Supreme Court, was referring only to published reports he had read, and not to any inside information.

“I can categorically confirm that at no time did I discuss with Mrs. Thomas or Justice Thomas any matters pending or likely to come before the Court,” Mr. Eastman wrote. “We have never engaged in such discussions, would not engage in such discussions, and did not do so in December 2020 or anytime else.”

Representative Bennie Thompson, the chairman of the Jan. 6 committee, told reporters at the Capitol on Thursday that the panel would likely reach out to Ms. Thomas for an interview. Ms. Thomas, for her part, indicated a willingness to speak to the committee, saying in comments to The Daily Caller that she “can’t wait to clear up misconceptions.”

A flurry of text messages written by Ms. Thomas to Mark Meadows, Mr. Trump’s chief of staff, were turned over to the committee and revealed earlier this year. They showed her fully embracing efforts to keep Mr. Trump in office, notwithstanding the will of voters. “Do not concede,” she wrote, and also expressed hope that Mr. Biden’s family and allies, and members of the news media, would be taken to Guantánamo Bay.