Matthew McConaughey comments on bipartisan framework for gun control package: ‘something’ has happened 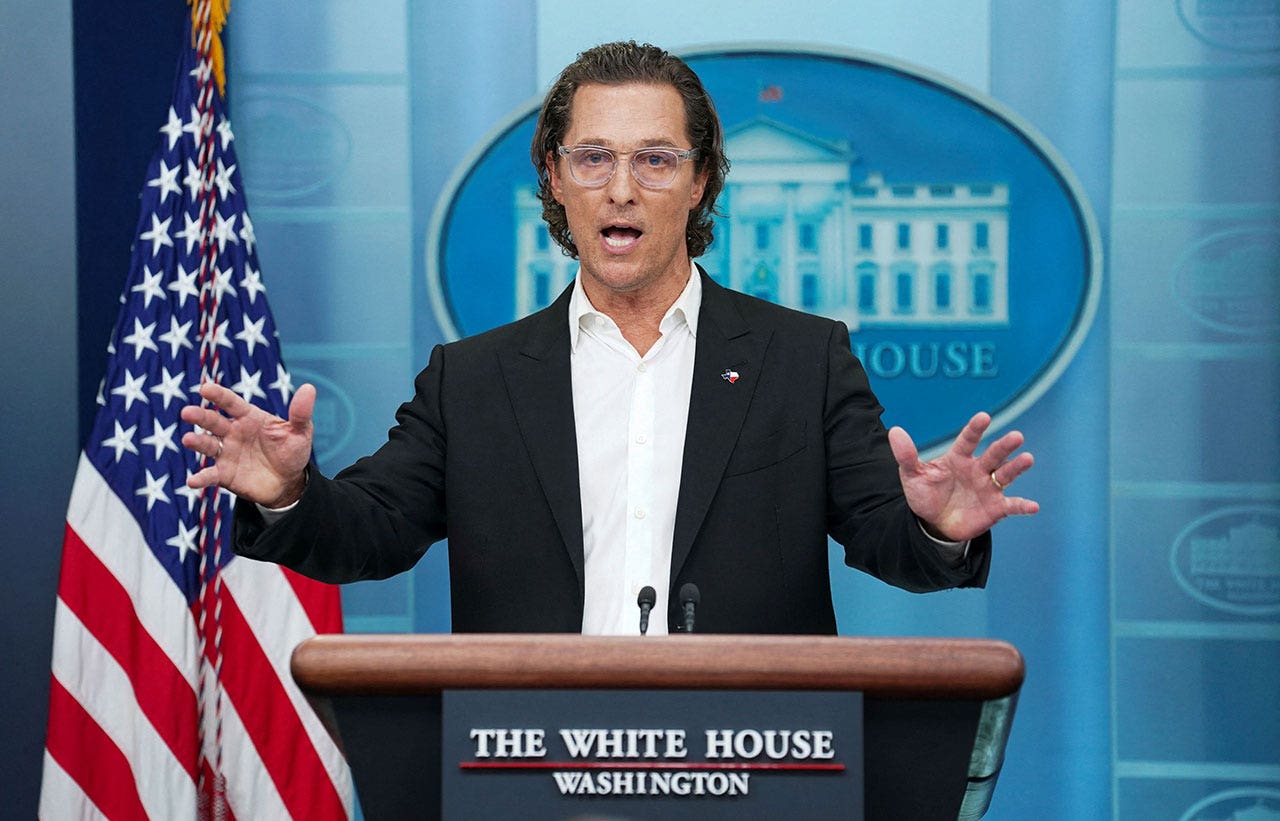 Actor Matthew McConaughey has issued a statement of support after a bipartisan group of senators have agreed to a framework regarding gun control and gun violence after last month’s horrific mass shooting at Robb Elementary School in Uvalde, Texas, which left 19 children and two adults dead.

The framework is primarily focused on gun control and gun violence prevention and was announced by a group of bipartisan senators on Sunday.

McConaughey, who was born in Uvalde, Texas, said that for the first time in 30 years, said on an Instagram story “‘something’ has happened.”

Actor Matthew McConaughey, a native of Uvalde, Texas as well as a father and a gun owner, speaks to reporters about mass shootings in the United States during a press briefing at the White House in Washington, U.S., June 7, 2022.
(REUTERS/Kevin Lamarque)

“For the first time in 30 years, ‘something’ has happened. The Senate has agreed on a bipartisan framework of policies that can enhance gun responsibility in America and save lives,” McConaughey said.

McConaughey recalled a discussion that he had with a U.S. Senator last week during a meeting, asking “What’s the best change you can imagine?”

“Something,” the Senator replied, according to McConaughey.

The actor said that “something” has been done to stop individuals who hijack the Second Amendment.

“‘Something’ has been done in the effort to stop some of the deranged individuals that, with every horrific act, abuse and hijack the Second Amendment,” McConaughey said. “‘Something’ has moved that we hope can help deliver on our shared effort to make the loss of so many lives matter.”

McConaughey said that he offers thanks to the people who made this possible.

“I do offer a firm handshake and a sincere ‘thank you’ to the members on both sides who came together and laid out this framework that can advance gun responsibility and save lives,” he added.

The actor, however, recognized that there’s still a lot of “hard work” for both parties to do, but said that Americans need to encourage “everyone at the table to act in good faith.”

“Let’s recognize that today’s announcement doesn’t mean we have a solution, but it does support more responsible gun ownership. There is still a lot of hard work for both parties, so let’s continue to encourage everyone at the table to act in good faith and give them our support to get this job done,” McConaughey said.

Actor Matthew McConaughey, a native of Uvalde, Texas as well as a father and a gun owner, becomes emotional as he holds up a picture of 10-year-old victim Alithia Ramirez as he speaks to reporters about the school shooting in Uvalde during a press briefing at the White House in Washington, U.S., June 7, 2022.
(Reuters/Kevin Lamarque)

“Today, we are announcing a commonsense, bipartisan proposal to protect America’s children, keep our schools safe, and reduce the threat of violence across our country. Families are scared, and it is our duty to come together and get something done that will help restore their sense of safety and security in their communities,” the senators said in a statement.

Hearts on a banner hang on a fence at a boarded up Robb Elementary School on Friday, June 3.
(AP/Eric Gay)

“Our plan increases needed mental health resources, improves school safety and support for students, and helps ensure dangerous criminals and those who are adjudicated as mentally ill can’t purchase weapons. Most importantly, our plan saves lives while also protecting the constitutional rights of law-abiding Americans. We look forward to earning broad, bipartisan support and passing our commonsense proposal into law,” they added.

After the mass shooting in Uvalde, Texas, McConaughey visited the White House on June 7 and made an emotional plea for the enactment of laws that would prevent gun violence.

“We need background checks,” McConaughey said. “We need to raise the minimum age to purchase an AR-15 rifle to 21. We need a waiting period for those rifles. We need red flag laws and consequences for those who abuse them.”

“We are in a window of opportunity right now that we have not been in before. A window where it seems like real change, real change can happen,” he said.