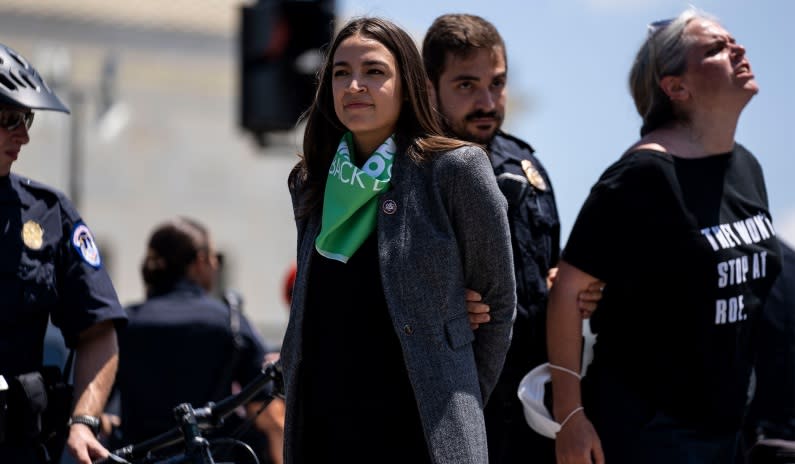 Representatives Alexandria Ocasio-Cortez (D., N.Y.) and Ilhan Omar (D., Minn.) were among seventeen lawmakers arrested during a pro-abortion protest near the Supreme Court on Tuesday. Though neither was handcuffed during the arrests, both pretended to have wrist restraints on.

However, several media outlets did not let the absence of handcuffs deter them from making it seem that the pair had been restrained.

ABC News shared two photos to Twitter with Ocasio-Cortez and Omar pictured with their hands behind their backs as if they had been handcuffed.

The ABC News story that is attached to the tweet fails to mention no handcuffs were present until the fifth paragraph.

Meanwhile, stories by The Guardian and The Hill were also accompanied by photos in which Ocasio-Cortez pretends to be handcuffed. Neither mentions that she is not.

A reporter for Minnesota-based WCCO-TV shared two clips of Omar’s arrest on Twitter, suggesting the congresswoman had been handcuffed.

She later walked back her claims that Omar had been escorted away in cuffs, writing in a tweet, “it looks at the end of the clip that she is not in cuffs.”

Ocasio-Cortez and Omar were among 35 people arrested for allegedly illegally blocking First Street Northwest after marching from the Capitol to the Supreme Court.

Police issued three standard warnings before arresting the demonstrators who refused to move from the street, Capitol Police said. At about 2:00 p.m., Capitol Police updated that the road was open again and the rally was cleared.