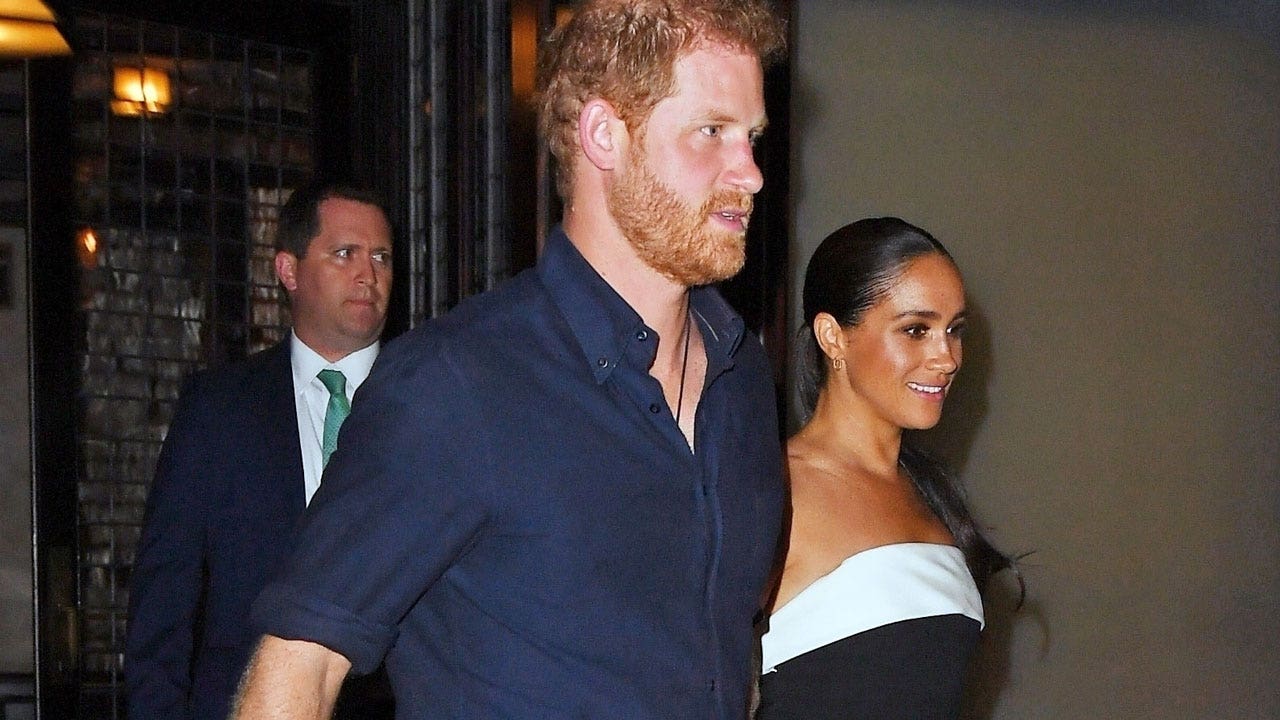 Prince Harry and Meghan Markle enjoyed a date night with friends Monday evening after appearing for a special address at the United Nations.

The couple enjoyed dinner at Locanda Verde, which is co-owned by actor Robert De Niro.

Markle and Prince Harry ate with their friends in the private section of the restaurant. The group stayed for around three hours before Prince Harry escorted Markle to the car when leaving.

Harry was dressed in a Navy blue shirt, while Markle wore a black and white jumpsuit paired with black stilettos.

Prince Harry and Meghan Markle leave Locanda Verde after having dinner with friends in New York City following an appearance at the United Nations.
(JosiahW / BACKGRID)

Harry, 37, and Markle, 40, arrived in NYC Monday along with their children, Archie and Lilibet.

Harry gave a keynote address to the UN on Nelson Mandela International Day. He also spoke about his love of Africa since his first visit at age 13. It was then when Harry revealed the special connection it holds for him and Markle.

“For most of my life, it has been my lifeline, a place where I found peace and healing time and time again,” said Harry.

“It’s where I felt closest to my mother and sought solace after she died, and where I knew I had found a soulmate in my wife. And it’s why so much of my work is based there.”

Meghan Markle was spotted out with Gloria Steinem in New York City while in town for the UN appearance.
(TheImageDirect.com)

Markle was also spotted with journalist Gloria Steinem while in NYC for the UN address. The “Suits” actress previously spoke with Steinem to Vogue reporter Jessica Yellin about the overturn of Roe v. Wade.

“This is having a very real impact on women’s bodies and lives starting now. Women are already sharing stories of how their physical safety is being put in danger,” Markle said.

“Women with resources will travel to get an abortion, those without might attempt to give themselves one at tremendous risk. Some will have to source abortion pills from unregulated pharmacies. Others who are pregnant and find themselves in a medical emergency will be at the mercy of doctors and lawyers to determine if a procedure that is needed to save her life can even be done at all.”

Steinem added, “A big part of the problem, of course, is that we have a Supreme Court that does not represent the country. Perhaps because I’ve been here longer, which means I’ve been here before, I say we are going to do what we need and wish to do.”

“Something like one in three American women had an abortion when it was illegal. The need and the right to govern one’s own body continues. We need to translate it into a political reality.”