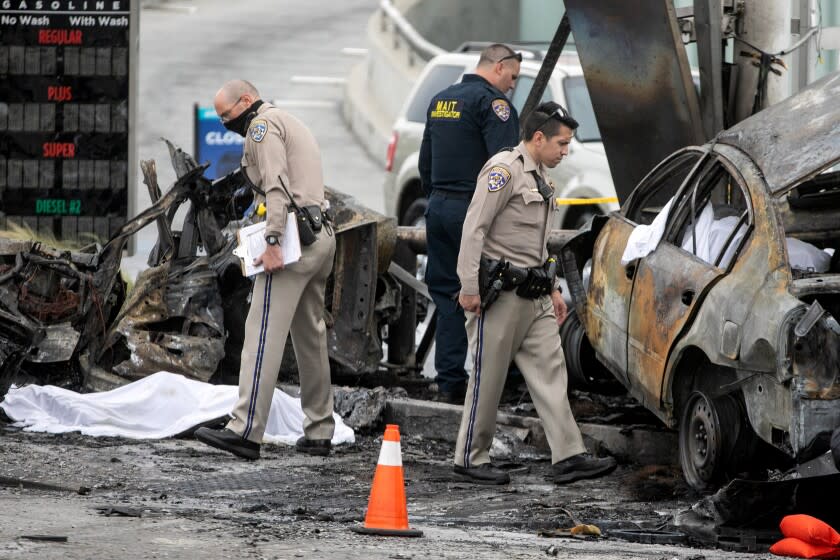 A registered nurse has been arrested and will be booked on vehicular manslaughter charges in the fiery Windsor Hills crash that killed five people, including a pregnant woman, law enforcement sources confirmed to The Times on Friday.

Nicole Linton, a nurse who is registered to practice in California and Texas, was identified as the driver of the Mercedes-Benz that hurtled down La Brea Ave toward Slauson Avenue between 80 and 100 miles per hour at the time of the crash Thursday afternoon, sources said. She is currently in the hospital and is cooperating with California Highway Patrol investigators.

Authorities are checking Linton’s bloodwork to determine if she was under the influence, according to two law enforcement sources.

She is to be formally charged by the Los Angeles County district attorney on Monday. A family member of Linton’s declined to speak to a Times reporter on Friday.

Her arrest comes on the same day that the county coroner identified the pregnant woman who died in the high-speed crash as Asherey Ryan, 23. It was not immediately known which car she was in or how she was involved in the crash.

Ryan was eight months pregnant at the time of the crash, a source said. Linton is likely to be charged with killing the unborn child as well as the five others.

Besides Ryan and her baby, the other victims names have not been released by the coroner.

Eight people were also injured in the crash.

Surveillance video shows a Mercedes-Benz barreling down La Brea at a high speed as dozens of cars cross the intersection on Slauson. The Mercedes runs a red light and slams into cars in the intersection, then bursts into flames and hurtles into a light pole, where it comes to rest.

After the crash, a streak of fire burned on the ground.

Smoke could be seen billowing from miles away.

Officer Franco Pepi, a California Highway Patrol spokesperson, said Thursday afternoon that three adults, including a pregnant woman, and an infant were killed in the crash.

Authorities later found another person’s remains inside one of the burned vehicles, he said. That person’s gender or age weren’t known Thursday night.

Authorities took eight people to Ronald Reagan UCLA Medical Center for treatment, he said. Of those injured, six were teens and one suffered major injuries.

A woman who did not want to be named told The Times a Mercedes-Benz hit her car as she was leaving a United Oil gas station.

“I was getting out, had got gas,” she said. “All of a sudden that Mercedes is coming at me on … fire. I didn’t have any time to think about it. It hit my car. I veered, hit the bench on the side.”

The crash caused her to fear a gasoline-fueled explosion, she told The Times.

Nearby, Linton’s Mercedes-Benz had crashed into the curb and come to rest.

The cause of the crash was not immediately known, but the CHP spokesperson said investigators determined the Mercedes-Benz was traveling “at a high rate of speed” and ran a red light while traveling southbound on La Brea.

At least six vehicles were involved in the crash, three of which were engulfed in flames, Pepi said. The others sustained moderate damage.

Mourners began to gather at the crash site Friday. Road crews were replacing the traffic signals that were damaged by the crash. Witnesses described a horrific scene.

Eran Hall has worked at La Brea Gas across the street for about eight months and has seen several car crashes, but never like the one that unfolded Thursday.

“Everyone was just shocked,” Hall told The Times on Friday morning. “Some people started to run away from the gas station because of all the flames. Other people started helping the drivers in the other cars that were pushed to the side.”

Henry Sanchez, who works at the Sinclair gas station, said the flames were out of control.

“At that point it was just too late for people to do anything,” Sanchez said.

Before the crash, Sanchez heard the scraping sound of the car coming down the hill.

“You hear the tires grinding,” Sanchez said. “The sound stuck with me.”

Noel Senior who works at Little Kingston Jamaican heard a loud boom and when he stepped outside his business and looked down the street he saw a column of flames lapping up at the gas station sign. “There was nothing we could have done. Nobody was going to come from the fire,” Senior said.

“Everyone was going through a process of not really knowing what to do and helping as best as they can,” said Jamarcus Robinson, who had popped into the United Oil for a Powerade while going for a run. “We saw a baby. There was a car seat in the street and a baby not too far out.”

“I could barely sleep at night,” he added.

Veronica Esquival told KTLA-TV Channel 5 that a baby came to rest in the intersection. “One of the workers came and saw me with the baby and took the baby out of my hands. Somebody tried to resuscitate the baby, but the baby was gone,” she said.