More Than Fjords: A New Museum to Put Oslo on the Map 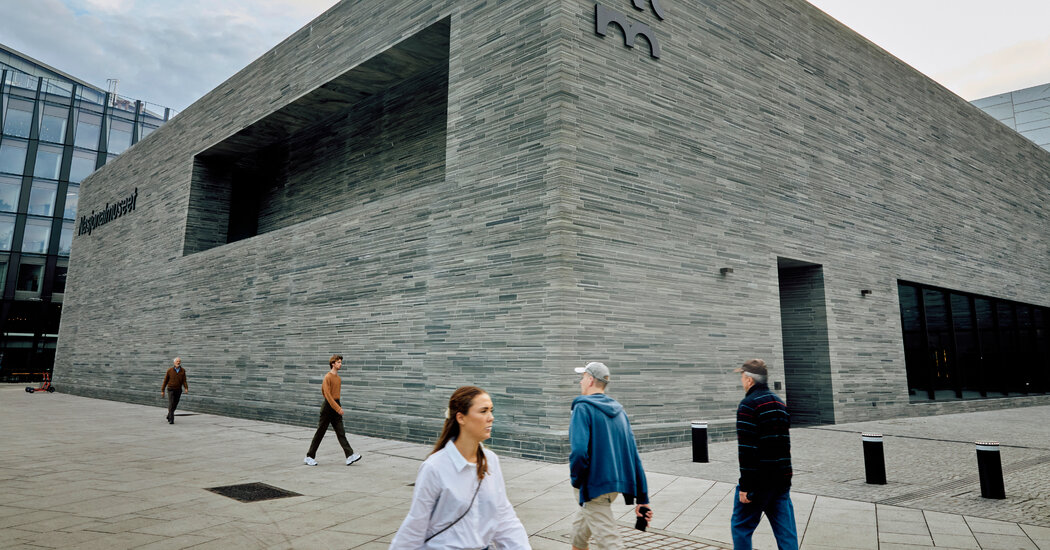 OSLO — For decades, Oslo lived in the shadow of Scandinavia’s two other capitals, Stockholm and Copenhagen. The Norwegian city, alongside a picturesque fjord dotted with rugged islands, has often been derided as sleepy and overpriced, or as a mere stopping-off point for tourists heading into the Norwegian mountains or boarding a cruise along the coast.

In recent years, Norwegian and municipal authorities have spent hundreds of millions trying to change that view. As part of a redevelopment project known as “Fjord City,” leaders have transformed the Oslo waterfront into a glossy district of high-rises and pedestrian plazas dotted with swimming spots and cultural amenities, including its now famous opera house and the towering new home of the Munch Museum, dedicated to the Norwegian painter Edvard Munch.

On June 11, after years of delay and dispute, the most ambitious of these projects is finally opening its doors: the country’s new National Museum, a gargantuan building covered in gray slate that will contain the collections of four now-combined arts institutions chronicling the country’s artistic heritage. It will be the Nordic region’s largest museum.

Officials hope it heralds Oslo’s transformation into a global cultural capital. “Norway is so much more than fjords and mountains, and I think that will actually be a surprise for people when they visit,” said the museum’s director, Karin Hindsbo, in a recent interview. “I’m bragging, but it’s true.”

There are historical reasons that Norway, a country of five million people, has long been culturally overshadowed by its Scandinavian neighbors. Denmark ruled Norway during the Dano-Norwegian Union, which lasted from the 16th until the 19th century. Norway became an independent country in 1814 with its own Constitution, but remained in a union with Sweden under the Swedish king until 1905.

But buoyed by oil wealth, the country has become an economic powerhouse in recent decades, and its cultural output has drawn increased international attention. Its generous support programs for artists have helped spur its recent high-profile contribution to film (including last year’s Oscar-nominated “The Worst Person in the World”), music (acts like Sigrid and Girl in Red) and literature (Karl Ove Knausgaard, Vigdis Hjorth).

The 6,500 items on show in the National Museum include perhaps the best-known Norwegian artwork, Munch’s “The Scream,” as well as stylish exhibitions of Viking drinking horns and medieval tapestries and modern Norwegian furniture design. The museum also includes what Ingvild Krogvig, a curator focused on contemporary art, described as the first permanent overview exhibition of postwar Norwegian art in an Oslo museum. Krogvig explained that organizers had assembled the collection with the goal of spurring a discussion around the country’s artistic canon. “Maybe there is now more confidence that we are part of the international discourse,” she said.

At times, the project has been overshadowed by public disputes. The opening was delayed from 2020 by problems with subcontractors, drawing anger from many residents who had already spent many years without access to the museum’s collections; Klaus Schuwerk, the building’s architect, has publicly bristled at the museum staff’s interior design and choice of signage. In an interview with NRK, Norway’s public broadcaster, he derisively described the setup of the inaugural contemporary art show as resembling a “flea market.”

Other pushback has centered on Hindsbo, the director. She has been criticized in the media for her managerial style and her purchasing decisions for the collection. She was also accused of receiving her job via connections through her husband, a former politician in the Norway’s Conservative Party. “I think that was a bit misogynist,” she said. “I’m quite sure that I was appointed for my skills.” She added that she had barely met her husband at the time of her appointment.

Hindsbo said she had been prepared for criticism over her Danish background, given the project’s importance for Norwegian identity and Denmark’s historical status as a dominant power over Norway. At one point, she recalled, an acquaintance had spit on her over a disagreement related to the project (though she declined to speak about the details of the encounter). “It could have been much worse,” she said about the pushback, adding that she had now attained Norwegian citizenship.

Despite the commotion, the early reviews of the project in the Norwegian press have been positive. A writer in Aftenposten, Norway’s largest-circulation print newspaper, described it as a “museum that is aware of its responsibility and tradition.” A critic in Dagsavisen, a left-leaning daily, predicted that the museum would “become an international audience magnet,” adding: “Norwegian art heritage has finally arrived in its home.”

Officials are hoping this assertive approach to showcasing Norwegian culture will pay off with more international visitors. Aside from the National Museum and the opera house, the city’s waterfront has recently seen the construction of a striking new library, the Astrup Fearnley Museum of contemporary art and the new building for the Munch Museum. This month, officials also unveiled a monumental bronze sculpture of a kneeling woman by the British artist Tracey Emin on a pier in the fjord.

But the Fjord City project has come with its own set of controversies. The decision to relocate the Munch Museum from the more residential and less accessible Toyen neighborhood was criticized for sacrificing the needs of residents for those of visitors. The museum’s new building, a soaring construction with a gray, undulating exterior by the Spanish architecture firm Estudio Herreros, has not gone over well locally.

Although the Munch Museum’s new building allows curators to stage more ambitious exhibitions than its previous location, a critic for NRK, the public broadcaster, described the project as a “scar on the face of Oslo.” Gaute Brochmann, the editor in chief of Arkitektur N, a Norwegian architectural review, said he believed the museum was an “uninspired building” that made “strikingly bad” use of materials, with “interiors that are similar to an airport.”

Nevertheless, Stein Kolsto, the urban planner in charge of Fjord City, pointed out that the Munch Museum relocation had already succeeded in one of its major goals: increasing visitor numbers. In the first three months after its new site opened, it attracted nearly as many visitors as the previous building did in some entire years. “Putting all of these public cultural institutions in one place will attract many more people,” he said.

Raymond Johansen, Oslo’s governing mayor, said in a phone interview that he was optimistic that the criticism of the Munch project would abate. “The Munch Museum will become a landmark, but it will and must take time,” he said, adding that the opening of the National Museum and the other Fjord City cultural projects were “a lift for the municipality because it’s important to be a visible cultural capital.”

“We are doing our utmost,” he said, “to put Oslo on the international map.”