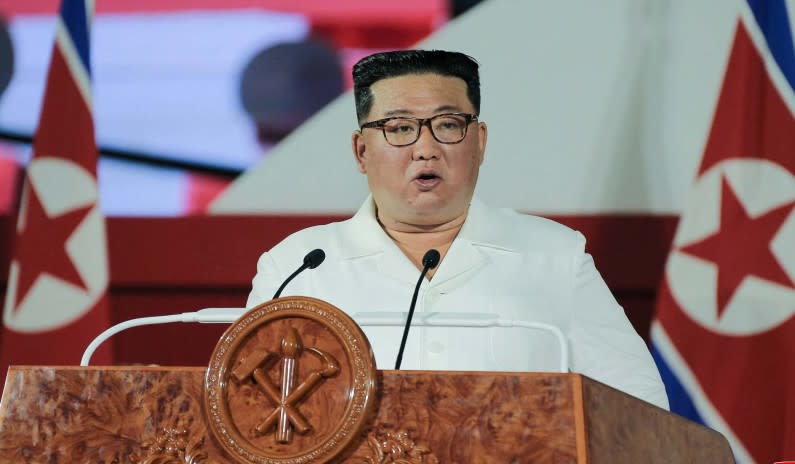 Kim Jong-un has warned that North Korea is ready to use nuclear weapons against the U.S. in a potential conflict, claiming the U.S. is “in pursuit of military confrontation,” state media reported Thursday.

“Our armed forces are now fully prepared to cope with any sort of crisis, and our state’s nuclear war deterrent is also fully ready to demonstrate its absolute power accurately and promptly true to its mission,” Kim said in a Wednesday speech to war veterans celebrating the 69th anniversary of the end of the Korean War, according to the Korean Central News Agency.

Kim claimed the U.S. is spreading rumors about North Korean threats, calling such behavior “just that of a gangster.”

“The United States, while describing all the usual actions of our armed forces as ‘provocations’ and ‘threats,’ is openly waging large-scale joint war games, which gravely threaten the security of our state. Such a double-dealing behaviour is just that of a gangster, and this is driving the DPRK-US relations to a limiting point, a point of fierce collision, which cannot be reversed any further,” he said.

The North Korean leader also claimed the new South Korean government led by President Yoon Suk-yeol is “driving the situation on the Korean peninsula into the brink of war.”

President Joe Biden and Yoon discussed starting conversations about joint U.S. and South Korean military training on the Korean peninsula when the two leaders met in May. Biden also reaffirmed the U.S. is ready “to deploy strategic U.S. military assets in a timely and coordinated manner as necessary.”

“If the south Korean regime and military ruffians think about confronting us militarily and that they can neutralize or destroy some parts of our military forces preemptively by resorting to some special military means and methods, they are grossly mistaken!” Kim said.

“Such a dangerous attempt will be punished at once by a powerful force and Yoon Suk-yeol regime and its army will be annihilated,” he added to the warning.

As tensions between North Korea and the U.S. rise, the communist state and Russia grow closer, with the Russian ambassador to Pyongyang saying North Korean “builders” will come to rebuild occupied Donbas.