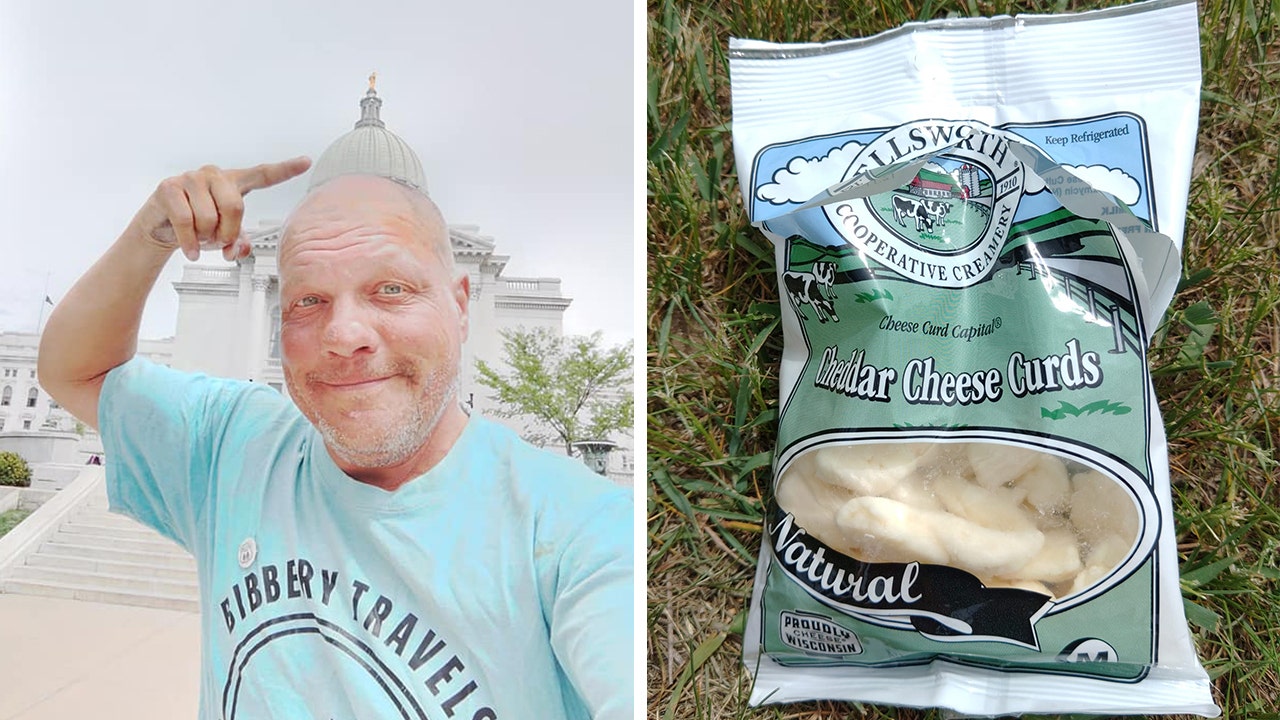 Bob Barnes, the man who is bicycling to every U.S. state capital in one year, got a taste of cheese curds after he visited capital no. 41 on his trip: Madison, Wisconsin.

“That’s one thing that every single person says you’ve got to try them,” he added.

Cheese curds — especially in Wisconsin — are typically made in the cheddar-making process, according to WisconsinCheese.com.

One thing Barnes made sure to do when he was in Wisconsin was try the cheese curds. “They made you smile,” Barnes said. “They’re delicious.”
(Bob Barnes)

In Wisconsin, cheese curds are either eaten fresh — when they’re “squeaky,” the website explained — or fried.

Barnes tried both and said he preferred the fresh cheese curds, but he still liked the fried ones.

“They make you smile,” Barnes said of the cheese curds. “They’re delicious.”

Here are some other adventures Barnes experienced on his trip through the Badger State.

Barnes reached Madison on May 15. One of his Facebook followers cycled alongside him for about 13 miles into the capital city.

“It was a really nice ride,” Barnes said. “It turned out really well.”

Madison, with a population of over 258,000, was one of Barnes’ favorite cities in Wisconsin.

On his way into Madison, one of Barnes’ Facebook followers met up with him and they rode together into the city.
(Bob Barnes)

“Madison’s a fascinating city and it’s the most bike-friendly city on this trip, by far,” Barnes said.

“Everybody’s got a bike,” he added. “Everybody’s on one of the [bike] trails. There are trails everywhere. I didn’t expect that.”

“If you’re into any sort of recreation, you should visit Wisconsin.”

Barnes described the elaborate trail system throughout the Badger State, along with plenty of other activities.

Barnes was able to go inside the Wisconsin state capitol even on a Sunday.
(Bob Barnes)

“The capitol building itself had an observation deck,” Barnes said. “And that’s just very rare. It was cool, though. Because you get to go up top and you get to walk around the whole dome.” Barnes took this picture of downtown Madison from the observation deck.
(Bob Barnes)

“If you’re into any sort of recreation, you should visit Wisconsin,” Barnes said. “Whether it’s snowmobiling, ATVing, boating … even cross-country skiing. Anything. Anything outdoorsy and you will be accommodated.”

The Badger State even made it to Barnes’ list of top 5 states, tying for third place alongside Ohio and behind Iowa in second place and Mississippi in first.

‘Spookiest’ part of the trip

Barnes also enjoyed the town of Dickeyville, where he saw the world’s largest “M.” It was built in 1936 by engineering students at the University of Wisconsin-Platteville to symbolize the history of mining at the university, according to the school website.

Barnes also saw the Dickeyville Grotto, a fascinating structure in the town made between 1925 and 1930 by Father Matthias Wernerus, a Catholic priest.

When he was in Dickeyville, Barnes got a glimpse of the world’s largest “M,” built in 1936.
(Bob Barnes)

While he was in Dickeyville, Barnes saw The Grotto, a structure built between 1925 and 1930.
(Bob Barnes)

The grotto is “dedicated to the unity of two great American ideals — love of God and love of country,” according to the Dickeyville Grotto website.
(Bob Barnes)

“Somebody, with his hands, sat there with stones and built these things,” Barnes said of the structure and the surrounding statues.

“It was cool. You can just picture somebody putting every single rock in there.”

The Grotto is “dedicated to the unity of two great American ideals — love of God and love of country,” the Dickeyville Grotto website says.

A few days later, while Barnes was cycling on a rail trail, he went through an old railroad tunnel that was over a quarter of a mile long.

“Once you’re in the middle, you’re far away from [the exits]. It’s just spooky.”

“That was probably the spookiest part of this entire trip so far,” Barnes said of the tunnel.

Barnes said once he got into the tunnel, he needed a flashlight because it was so dark.

While riding through Wisconsin on one of the state’s rail trails, Barnes came across this tunnel, which he estimated was over a quarter of a mile long.
(Bob Barnes)

Barnes snapped a photo of his bicycle from inside the tunnel. “You go into it [and] there’s only two ways out, backwards or forwards,” Barnes said. “Once you’re in the middle, you’re far away from [the exits]. It’s just spooky.”
(Bob Barnes)

“You go into it [and] there’s only two ways out, backwards or forwards,” he said. “Once you’re in the middle, you’re far away from [the exits]. It’s just spooky.”

“It was fascinating,” Barnes added. “That was a really unique experience. That was cool.”

Barnes also hit a bit of a rough patch when he left Route 151 to try what he thought were typical bike trails.

Instead, he found himself on ATV trails for about 20 miles, which made for a challenging ride.

“I turned it into a really tough day and it didn’t need to be,” Barnes said.

“I made a bad decision that day and I got mad at myself because I left a sure thing, which was the road with a shoulder,” he added.

Barnes hit a bit of a rough patch — literally — when he left Route 151 to try what he thought was a typical trail. Instead, he came onto an ATV trail, which made his trip much more challenging.
(Bob Barnes)

“Wisconsin’s kind of what you’d think it would be,” Barnes said. “When you think of Wisconsin, you think dairy. So you do see the dairy.” He took this picture of a field of cows in Wisconsin.
(Bob Barnes)

Despite the added challenge, Barnes still finished the miles he needed for the day, reaching 45.58.

“I was more tired than I should have been,” he said.

Barnes was also worn out a bit after he donated platelets for a second time in Madison on May 16, after spending the night in a hotel gifted to him by one of his Facebook followers.

After the donation platelets, Barnes got right back on his bicycle, despite being told he shouldn’t exercise immediately after donating.

When he was in Wisconsin, Barnes donated platelets for the second time.
(Bob Barnes)

“Everybody’s got a bike,” Barnes said of Wisconsin. “Everybody’s on one of the [bike] trails. There are trails everywhere. I didn’t expect that.”
(Bob Barnes)

“I was really tired,” Barnes said. “[Donating platelets] saps me … I had no energy.”

Barnes had to stop for the day after just 27.26 miles.

“Next time, I’ll pedal first and donate at the end of the day,” Barnes said.

Aside from his plan to donate blood while he’s in Hawaii, Barnes said he would wait and see about other donations in between.

“I have to focus on the mileage,” he said.

After Barnes left Wisconsin on May 19, he headed to Saint Paul, Minnesota, his 42nd capital.

While he was still in Wisconsin, Barnes booked his ferry ticket to go to Alaska after visiting all of the Lower 48 states.

“It’s taken a lot of logistical doing to figure out the ferries themselves,” Barnes said. “Mine is for July 22 and then the next ferry leaves in three weeks. So if I don’t make that one, I’ve got to wait three weeks.”

The ferry will take him from Prince Rupert Harbour in British Columbia to a port in Juneau. From there, Barnes will cycle to the capitol building.

After visiting Juneau, Barnes will fly with his bike to Hawaii, where he will finish his journey.

Fox News Digital has been following Bob Barnes’ journey across America and detailing it for readers in this unique Lifestyle series. To catch up on — or enjoy once more! — his previous three trips before the one described here, read more below:

NY man cycling across America is bitten by a dog in Illinois: ‘I just kept going’

NY man cycling to all 50 states burns his tent down in Michigan: ‘I tried not to panic’

Ann W. Schmidt is a lifestyle reporter and editor for Fox News Digital.

Norway puts down Freya the walrus that drew Oslo crowds