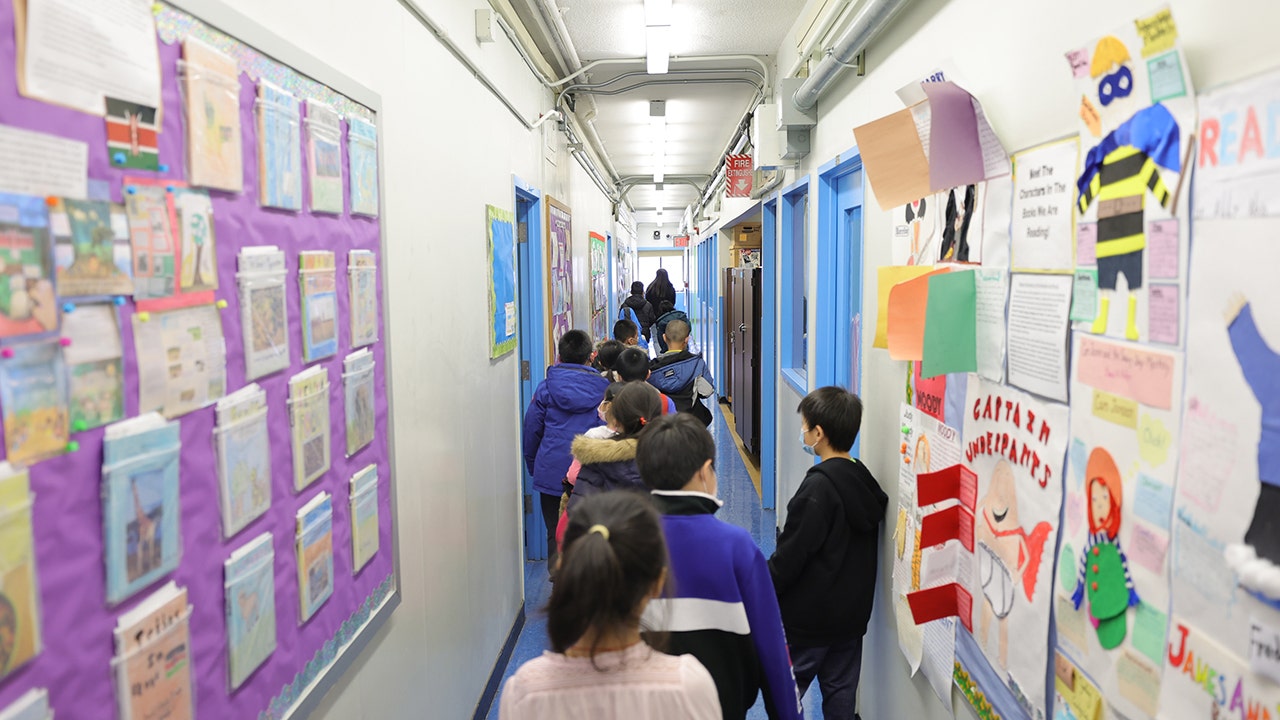 New York City shelled out more than $200,000 in taxpayer funding in the past five years to have drag queens come into classrooms and interact with schoolchildren as young as age 3, according to a report.

The total includes a $50,000 contribution from New York State through its Council on the Arts, along with $157,000 earmarked from New York City’s Departments of Education, Cultural Affairs, Youth and Community Development, and even from the Department of Transportation, according to the Post.

Records show that the non-profit received $46,000 from city contracts for appearances at public schools, street festivals and libraries in May alone ahead of Pride month.

Students are led to their classroom at Yung Wing School P.S. 124 on March 07, 2022, in New York City.
((Photo by Michael Loccisano/Getty Images))

The events involve cross-dressed drag performers reading to school children at public schools, libraries and other LGBTQ centers, but has expanded to also include coloring activities. Photos show drag performers also instructing children in classrooms how to apply drag makeup.

According to a reading list the non-profit shared online, performers read a variety of books ranging from classics like “The Very Hungry Caterpillar” and “The Rainbow Fish,” which discuss topics like growth, acceptance and diversity, to others that more overtly discuss gender identity, such as “The Hips on the Drag Queen Go Swish Swish Swish” and “The Dragtivity Book.”

The annual Pride Parade in Queens kicks off a month of gay celebrations in the city, on June 5, 2022, in the Jackson Heights neighborhood of Queens, New York.
((Photo by Andrew Lichtenstein/Corbis via Getty Images))

According to its website, Drag Story Hour NYC so far this year has produced 49 Drag Story Hour programs for 34 individual public schools and special needs schools in English, Spanish, and Cantonese.

“It costs us $600 to produce each DSH program, but we only charge public schools $300 per program, and we offer a limited number of free programs for schools that can’t afford the fee,” according to the website, which asks for donations.

“Last year, we received $3900 from the NYC Department of Education to subsidize our free and low-cost programs in public schools. This year, we didn’t receive that funding and had to stop offering programs at our subsidized rate toward the end of the school year. This Pride month, we’re aiming to raise $6000 so that we can continue to provide free and low-cost programs for public school this fall.”

The annual Pride Parade in Queens kicks off a month of gay celebrations in the city, on June 5, 2022, in the Jackson Heights neighborhood of Queens, New York.
((Photo by Andrew Lichtenstein/Corbis via Getty Images))

Reached by the Post, the New York City Department of Education defended the program as “life-saving.”

“Last year, 50 transgender or gender-nonconforming people were killed in the United States due to their identity,” DOE spokeswoman Suzan Sumer told the outlet. “We believe our schools play a critical role in helping young people learn about and respect people who may be different from them.”