Opinion | Everyone Deserves an Equal Chance for a Campsite 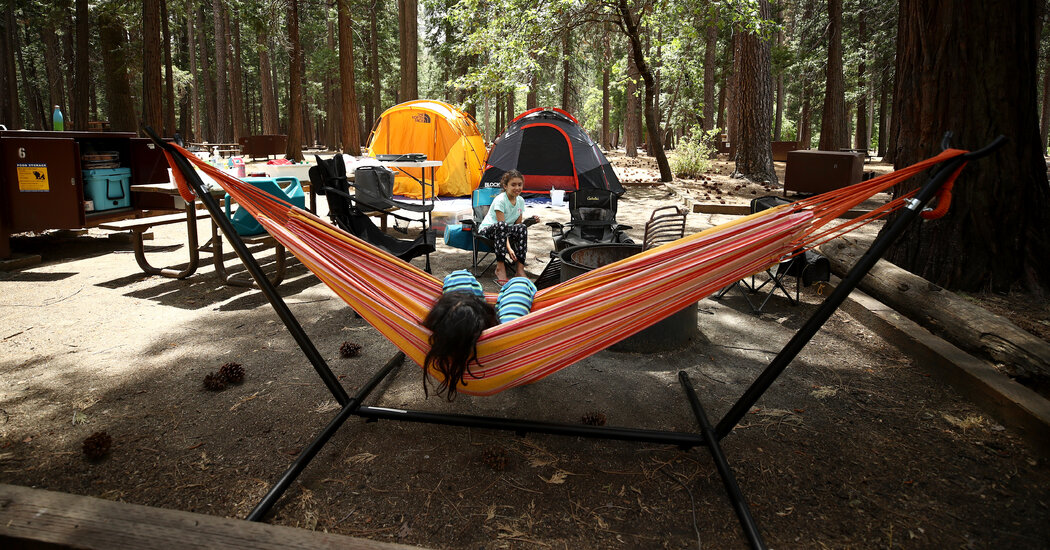 In the summer darkness of a July night in 2016, I was stumbling bleary-eyed toward the kiosk at the entrance to Camp 4, the campground in Yosemite National Park favored by climbers worldwide, when I tripped on something.

“Sorry,” I whispered to the body sprawled out on the dirt trail. In front of him, I saw dozens of other human shapes leaning against big logs on either side of the path. It was 3 a.m., and they had already staked out spots in line to get one of the 32 first-come first-served camping spots (now 61, after an expansion) that would be doled out around 8 a.m. I’d thought I had come early enough to be near the front of the line; now I wasn’t sure I’d get a campsite.

There’s got to be a better way, I thought, as I plopped down on the cold dirt next to the guy I had accidentally kicked in the ribs. He was back to snoring.

Almost three years later, in 2019, Yosemite National Park announced the first-ever reservation system for Camp 4 via Recreation.gov. Many other national park campgrounds have done the same in recent years to make the allocation of campsites more efficient.

Yet this online reservation system — with bookings that become available at an advertised time, like concert tickets — has raised concerns that it is disadvantaging the historically marginalized communities the Park Service has worked hard to attract in recent years to its more than 400 parks around the country.

This problem may only become worse. The summer is gearing up; last year, visits to the national parks jumped by 60 million people, to nearly 300 million, after many park facilities were closed by the pandemic in 2020.

A study published in March in the Journal of Park and Recreation Administration underscored that worry. After examining how the reservation system worked at five federally administered campgrounds — one each in Colorado, Oklahoma and Utah, and two in Virginia — researchers from the University of Montana concluded that “online reservation systems present the unintended consequence of excluding low-income, and perhaps nonwhite, would-be campers.”

The reason involves socioeconomic factors that correlate with the requirements of booking online, the study’s lead author, Will Rice, a parks management specialist, told me. For example, lower-income groups are less likely to have access to high-speed internet — a must for the most sought-after campsites.

“It’s an open secret that spots are really hard to get,” Dr. Rice said. “You have to be online to reserve them right when the window opens. You have to have really high-speed internet so you can be one of the few people who get those reservations.”

To put that in perspective, in one remarkable instance cited last year by Recreation.gov, almost 19,000 people competed to book 57 campsites for the same dates. The locations were not disclosed.

Then there is the issue of having to make a reservation far in advance; many campsites allow bookings up to six months ahead. “There’s a significant portion of the population that just don’t have a job or lifestyle that allows them to plan six months in advance for a vacation,” Dr. Rice said.

Other problems that stack the deck against minority and lower-income campers include third-party pay sites, like Campnab, that for a fee monitor when campsite reservations open up on Recreation.gov. There’s also the issue of figuring out how and when to book on Recreation.gov.

The growth in camping in the national parks has tracked with the sharp rise of overall visitors to the parks in recent years. From 2013 to 2017, visitors to National Park properties increased by nearly 21 percent, and tent campers increased by nearly 25 percent. In 2018, nearly five million campers stayed in national park campgrounds. And that demand is not limited to any one demographic: According to a 2019 report commissioned by the National Park Service, about half of new campers in 2017 and 2018 were nonwhite; a 2022 report by Kampgrounds of America says that the proportion of camping households who identify as Black in North America has doubled since 2014. It’s great to see so much interest among nonwhite campers; but will they stay interested if they are frustrated by a reservation system that favors the most technologically savvy campers, no matter their race?

It’s true that such huge demand creates access problems for everyone, not just minority and lower-income households. Thirty percent of would-be campers experienced “challenges” in getting a site in a national park in 2018, according to a study for the park service, and “one of the main complicating factors was how far in advance the campers tried to make reservations.” And yes, in the same way that overcrowding at national parks is a legitimate issue, there are good reasons to streamline campground booking; I don’t fancy a return to the midnight lineup at Camp 4 any more than the guy I kicked in the ribs likely does. We know there is no panacea for campground reservations that will perfectly address equity, convenience and efficiency.

There are some heartening indications that the service is trying to do better. For example, the reservation program that Camp 4 began in 2019 employs a lottery system, in which prospective campers enter a random drawing for reservations on specific dates. Though the Camp 4 lottery introduces equity problems of its own — just to enter the drawing on Recreation.gov, would-be campers must pay a nonrefundable $10 fee, regardless of whether they get a campsite — it addresses some of the concerns about the online first-come first-served model.

A newer lottery reservation system for North Pines Campground, also in Yosemite, is even better. Starting earlier this year, would-be campers entered a lottery that gives them the chance to book campsites before the general booking date. According to Yosemite’s website, one of the program’s explicit goals is to create “a more equitable experience.”

Fifty-four years ago, the author Edward Abbey laid out his vision for a carless national park system in his classic book “Desert Solitaire.” He believed roads and motorized vehicles, and the passive tourism they enabled, poisoned the national park experience. He wanted people to hike and bike and come into direct contact with the natural world. His ideas still hold appeal to those who want the parks to remain as unspoiled by humans as possible. But his proposals for achieving that vision, which would have made parks much less accessible to disabled people, older people and children, were wrongheaded and discriminatory.

Mr. Abbey did get something right, though. “Wilderness is not a luxury but a necessity of the human spirit, and as vital to our lives as water and good bread,” he wrote.

That’s why it’s so important for the National Park Service to keep striving for more equitable access to all of its parks and campgrounds. They are our shared national heritage and belong to every American, including those without high-speed internet.

I have a trip booked to Yosemite this summer, my first visit since 2016. I plan to enter the Camp 4 lottery when it opens. I’ll be grateful if I get a spot. But if I don’t, at least I’ll have had the same shot at it as everyone else.

Michael Levy is a writer and climber.