Opinion | ‘Hochul Stood as Firm as an Oak’: Winners and Losers of New York’s Gubernatorial Debate 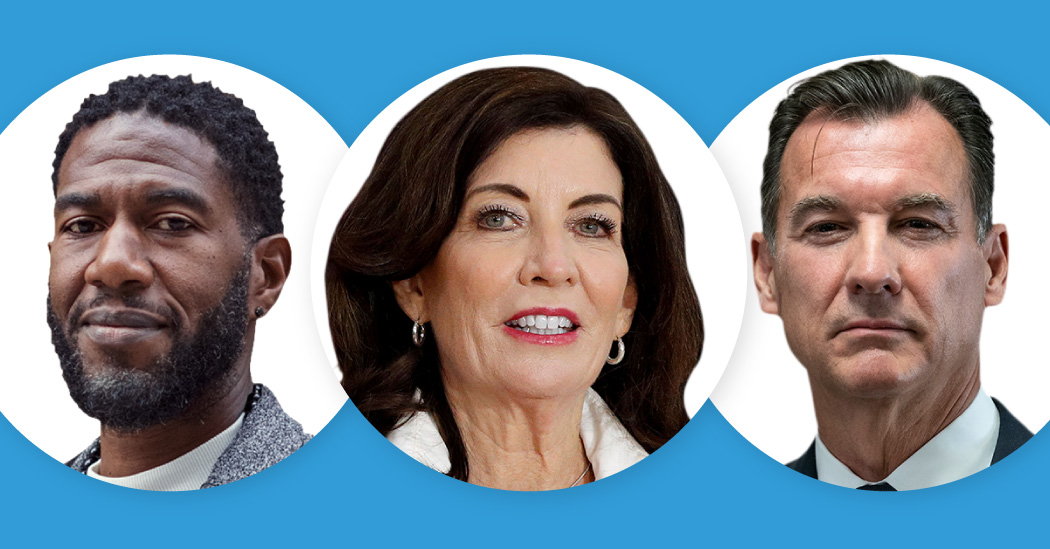 Welcome to the Times Opinion scorecard for Tuesday night’s debate among three Democratic candidates for governor of New York: Gov. Kathy Hochul, Representative Thomas Suozzi and New York City’s public advocate, Jumaane Williams. A mix of Times writers and outside political experts assessed the performances and rated them on a scale of one to 10. One means the candidate probably doesn’t belong in the governor’s mansion and maybe not even on the debate stage; 10 means she or he is ready to take on challenges from Staten Island to Albany to Buffalo.

Liz Benjamin (7/10) — A utilitarian performance with no unforced errors. Not a gifted orator but seemed to enjoy herself. Protected front-runner status and aptly highlighted achievements. Smoothly defended the scandal involving her handpicked lieutenant governor, pivoting to highlight a historic all-woman leadership team.

Gail Collins (6/10) — Basically, her explanation for the old N.R.A. endorsement was … that was when it worked for me politically. She should have been way better prepared to defend her football stadium giveaway.

Michelle Goldberg (7/10) — Unflappable. Her past coziness with the N.R.A. is a weakness, but she put an opportunistic political shift in the best possible light: “You know what we need? More people to evolve.”

Christina Greer (7/10) — Buffalo was once known as the city of trees, and Hochul stood as firm as an oak as her opponents pelted her with criticism of her ethics (Bills stadium), leadership (gun violence) and judgment (lieutenant governor selection). Her experience in office showed.

Luis Miranda (8/10) — Her focus on teamwork — whether with Mayor Eric Adams of New York City or a team of female advisers — was a refreshing departure from the past. Incumbency has many perks, and the governor knows how to flaunt them. She gave us a laundry list of accomplishments.

Jack O’Donnell (8/10) — Offered tangible accomplishments rooted in her personal values. Got hit, especially on guns and the Buffalo Bills, but was “happy to respond” and countered effectively. She’s the governor, and it showed to her advantage.

Eleanor Randolph (8/10) — In the Goldilocks zone, she managed to keep smiling as she withstood flak from Jumaane Williams on the left and Tom Suozzi on the right. Asked whether she preferred Superman or Batman, she chose Superwoman.

Brent Staples (7/10) — A performance in leadership. Repeatedly brought the conversation back to the gun-safety bills she just signed and to her firsthand involvement in other pending state initiatives. Her commitment to preserving women’s abortion rights carried emotional punch, as did her clapback on this topic.

Opinion Debate
Will the Democrats face a midterm wipeout?

Howard Wolfson (7/10) — Hochul spent an hour deflecting criticism and attempting to rise above constant attacks — mostly successfully. Standing center stage, she worked to position herself in the Democratic Party’s ideological center. She entered as the front-runner and left 60 gaffe-free minutes later in the same position. Asked to choose her favorite superhero, between Superman and Batman, Hochul had the night’s best moment when she chose Superwoman instead.

Liz Benjamin (6/10) — Threw the most verbal jabs but landed no knockout punches. Deft at turning almost every question — even a query about his own ethics probe — back onto the governor, repeatedly dinging her leadership on bail reform and combating crime and gun violence.

Gail Collins (8/10) — Took no time at all to get to Hochul’s stupid Buffalo football stadium plan … and blamed her husband’s business connections for selling the fans $11 beers.

Michelle Goldberg (5/10) — It would be easier for Suozzi to ding Hochul on ethics if he weren’t currently the subject of a House Ethics Committee investigation. Bold to say that his pet peeve is hypocrisy!

Christina Greer (6/10) — Far too many times, Suozzi sounded like a Republican-lite fearmonger without detailed strategies or plans to solve the issues he raised. Being a “common-sense Democrat” may sound attractive to some. But marijuana as a gateway drug? It’s 2022, Congressman.

Luis Miranda (6/10) — Suozzi is like a boxer in great shape, with nice choreographed moves, but unable to land punches to win a round.

Jack O’Donnell (6/10) — Clear on where Hochul was wrong — today and 10 years ago — but less clear on what he would do and where he would do better. Clearly not a Bills fan.

Eleanor Randolph (6/10) — Suozzi on the attack is good, fast political theater. He aimed at Hochul’s history on guns, her support for a costly stadium in Buffalo and her first choice for lieutenant governor, charged with campaign finance fraud. She smiled through it all.

Brent Staples (7/10) — Polished, concise answers. He rightly homed in on the process through which the Buffalo stadium deal came to pass and the high regard that the N.R.A. showed Hochul when she served in Congress. Can he weave these modest threads into a campaign narrative?

Howard Wolfson (5/10) — Humorless, grim and negative, Suozzi turned nearly every question into an attack on Hochul. He missed repeated opportunities to offer a positive vision of his own for the state. The contrast between Hochul’s friendly demeanor and Suozzi’s snarl did not help him.

Gail Collins (5/10) — The guy who really needed to make a breakthrough impression didn’t break through.

Michelle Goldberg (5/10) — I appreciated his empathy for people with mental illness, informed by his own experience with Tourette’s syndrome. But I doubt it will boost a campaign that’s not going anywhere.

Christina Greer (8/10) — Williams came prepared and is the clear progressive choice. His knowledge of myriad issues makes it clear why he is still in the race. He said he “thinks about the real answers to these questions,” and it showed.

Luis Miranda (7/10) — Big thinker, big ideas — you have to love the world through his prism. He let Hochul be and made the case against gun violence with passion and his own experiences.

Jack O’Donnell (5/10) — Connected when discussing New York’s most difficult challenges. Questioned the status quo, but his complex answers sometimes obscured his progressive values. Too much time discussing legislative priorities that failed rather than discussing bold policy he champions.

Eleanor Randolph (4/10) — Williams is a strong progressive who reveals his passion on so many issues, but if he was hoping for a breakout moment, it didn’t happen. He did argue that Hochul had failed as lieutenant governor by not standing up to former Gov. Andrew Cuomo. “In between those press conferences,” he said, “people are dying.”

Brent Staples (7/10) — A nuanced and effective counterpuncher. He used his responses to underscore campaign themes and critique the governor’s positions and answers in preceding rounds. His references to the need to help people facing eviction and foreclosure stand out.

Howard Wolfson (6/10) — Williams focused resolutely on gun violence and social spending but was never really able to offer a big, bold progressive plan of his own for the state. With nothing to lose, Williams should get out of the weeds, stop talking about million-dollar line items in the budget and start talking about his billion-dollar vision.

Liz Benjamin is the managing director for Albany at Marathon Strategies, a public relations firm, and was formerly a reporter covering New York politics and policy for two decades at various media outlets.

Christina Greer is a political scientist at Fordham University and a co-host of the podcast “FAQ.NYC.”

Luis A. Miranda Jr. is a founding partner of the New York consulting firms MirRam Group and the Hamilton Campaign Network and is the chairman of Latino Victory.

Jack O’Donnell is a veteran New York political strategist and lobbyist and the author of “Bitten by the Tiger: The True Story of Impeachment, the Governor, and Tammany Hall.”

Eleanor Randolph is a former editorial board member of The Times and the author of “The Many Lives of Michael Bloomberg.”

Brent Staples is a member of the editorial board of The Times.

Howard Wolfson was a deputy mayor under Mayor Michael R. Bloomberg, a senior adviser to Hillary Clinton’s Senate campaign and the communications director for her first presidential campaign.